Politics as Fashion Is a Bad Look 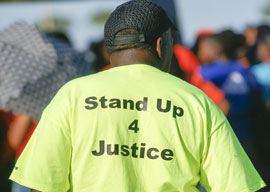 Great news, anarchists, you have your martyr.

LaVoy Finicum has just been shot by the Feds after a two-month standoff with authorities. He represented ranchers who were being bullied by a government hungry for the ranchers” valuable land. The government accused the farmers of terrorism after setting some brush fires and today Dwight and Steven Hammond are in prison.

We don”t yet have all the details, but since when has that stopped anyone? Some are saying LaVoy had his hands up so let’s get to making those “I am LaVoy” shirts.

Nope. Politics is fashion today and Finicum wouldn”t look good on a T-shirt. It amazes me that people are so into what’s in vogue when it comes to justice yet so totally disinterested when it comes to their own appearance. If you”re so into fashion, how about not wearing your stupid camping vest everywhere?

Despite Occupy Oregon meeting all the criteria for an anarchist revolution, the reaction is still much more in the #YallQaeda #VanillaISIS camp. I”m seeing people focus on the fact that LaVoy’s wife lists “foster care provider” as her vocation. Where were these people when we discovered that Trayvon’s father was a gangbanger? They want you to know that LaVoy’s fellow occupier Ammon Bundy may have been drinking alcohol at the time of his arrest. The same side that chanted, “What do we want? Dead cops! When do we want them? Now!” is offended that Bundy may have threatened cops. They call the ranchers welfare moochers who are taking advantage of the poor, feeble state.

“Anarchists wearing Guy Fawkes masks are all of a sudden concerned about the government not getting enough tax dollars.”

Apparently, allowing your cattle to graze outside government boundaries is some kind of aristocratic decadence. Anarchists wearing Guy Fawkes masks are all of a sudden concerned about the government not getting enough tax dollars. It’s willful ignorance.

Every time you hand the media the exact story they”re hunting for they say, “No, thanks” and run back to the narrative. They are obsessed with frat boys and attack Mattress Girl’s boyfriend, Duke Lacrosse, and the UVA frat with tireless gusto, but when confronted with a child prostitution ring, not even the police will go near it. Islam is so entrenched in rape culture that they bring children into the mix, but we turn a blind eye to that because that’s not how the story is supposed to go.

Childless hag Angela Merkel told the world there’s no such thing as a rapefugee. When anyone questioned her open borders she told them to go to a church or visit a museum and look at a painting. She opened the floodgates to the rapists and they got to raping. The very people holding “refugees welcome” signs were now being attacked en masse. The blindness went unabated and Europeans reacted by handing out pamphlets and holding cute signs with platitudes about being kind to one another. If anyone identified the problem they were arrested for hate speech. The narrative is that the patriarchy must be destroyed and anyone who stands in the way of this creative destruction must be silenced. Innocent students are guilty of rape until proven innocent and guilty rapists are innocent until proven even more innocent.

There’s a bizarre hierarchy of justice within this subjective reality where white males are at the bottom and gay minority women are at the top. This gets complicated when it’s white women against minority men. When Carlos Mencia and Fat Jew were caught stealing jokes, their careers were shut down. But when a friendly Jewish girl with blond hair did the exact same thing, we were told it’s just part of the art of comedy.

Jewish women trump Jewish men and Mexicans. Christians are below Muslims even when both are foreigners. When Nakoula Basseley Nakoula made a video mocking Muhammad, he was blamed for Benghazi. I remember when he was sent to prison, people I knew and respected shrugged and said he shouldn”t have violated his parole. Nakoula is a Coptic Christian from Egypt and his people (our people) are being slaughtered like cattle. The reaction when his right to free speech is violated is that he shouldn”t have made those Muslims angry.