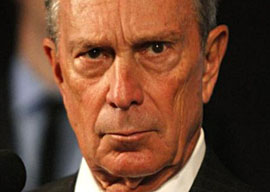 HOME
A judge smacked down Mayor Michael Bloomberg“s soda ban in New York City. Bloomberg vowed to appeal the decision, calling it “irresponsible not to try to do everything we can to save lives.” … The US Department of Agriculture might buy 400,000 tons of sugar to prop up the miserable industry, whose spokesmen claim prices are too low. … The White House is drawing up plans that will give the intel community full access to a database containing information about American citizens and others who bank in the US. … The Pew Research Center found that only 26 percent of Americans feel they can trust government “always or most of the time.” Hispanics (44 percent) and blacks (38 percent) showed overwhelmingly more trust in the federal government than whites (20 percent). … The Ludwig von Mises Institute discovered a letter that Warren Buffett’s father, Howard, wrote to Murray Rothbard in 1962 where Howard requested a few of Murray’s books so that his son could learn more about the free market. … Former US Rep. Gabrielle Giffords“s husband, who has been lobbying for stricter gun-control laws, was caught buying an AR-15 rifle at a gun store. … The Boston Globe and breitbart.com ran stories about Paul Krugman filing for bankruptcy without realizing their primary source was a satirical online newspaper. … NYPD officer Gilberto Valle was convicted on charges of plotting to kidnap, cook, and eat women, including his wife.

“The Pew Research Center found that only 26 percent of Americans feel they can trust government “always or most of the time.””

ABROAD
The world gave a round of applause to Greece, whose unemployment rate reached a record 26 percent in Q4. … Jorge Mario Bergoglio was officially elected to the papacy. Pope Francis, as he”ll be known, is the first non-European pontiff to head the Vatican in almost 1,300 years. … French lawyer Isabelle Coutant-Peyre is defending the Iranian government in its lawsuit against Hollywood for making movies such as Argo that “distort the country’s image.” Taki’s Mag reached out to her fiancÃ© for comment, but he was busy serving a life sentence for international terrorism. … Britain and France might make a play to bypass the European Union in order to arm Syrian rebels. … Venezuela took too much time deciding whether to embalm Hugo ChÃ¡vez“s body for eternal viewing, so nature decided for them. “Maduro wants to run the country, and he can”t even make sure that the president’s body is embalmed correctly,” said a doctor. … A Russian man named Aleksandr Kuptsov took four people hostage with a toy gun, demanding only a pizza and Coke before his swift arrest.

ONLINE
A Politico staffer “accidentally” added “haha” in an article about two American soldiers who died in Afghanistan. … The feds indicted Matthew Keys, a deputy social-media editor at Reuters, for allegedly feeding sensitive login credentials to the hacker group Anonymous, who later used them to deface the Los Angeles Times“ website. … The journalism industry is in a state of chaos after Google announced that it is retiring Google Reader in July. … The FBI opened an investigation into a rogue website (sporting a Soviet Union domain) that published Michelle Obama’s credit-card information. … An audio version of Bradley Manning“s military court speech was leaked onto the Internet, allegedly marking the first time the American public has heard his voice. … Veronica Mars creator Rob Thomas opened a Kickstarter campaign to pique interest in a film adaptation. Fans pledged $1M in four hours, setting a website record. The account reached $2M only six hours later. … A keyboard warrior learned an important lesson when English boxer Curtis Woodhouse, whom he had been taunting on Twitter about a recent loss, found out where he lived and live-Tweeted his trip to the kid’s house. “i am sorry its getting a bit out of hand i am in the wrong i accept that,” Woodhouse’s antagonist wrote shortly after peeing his pants.