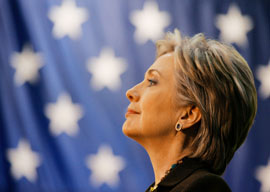 HOME
NYC Mayor Michael Bloomberg introduced legislation requiring stores to hide tobacco products inside cabinets or under counters where customers can’t see them. … The Government Accountability Office said it will not allow the cash-strapped US Postal Service to cease Saturday deliveries. … A gay-rights activist spent about $90,000 to buy (and paint rainbows on) a house across the street from the Westboro Baptist Church. … Hillary Clinton announced that she now supports gay marriage in a move that most are taking as her unofficial declaration of intent to run in 2016. … The Republican National Committee tried to prove that the GOP can still be hip in these quick-moving times but succeeded in doing the opposite with its 100-page strategy report. Chapters include “Groupthink is a Loser.” … Chicago Public Schools have forbidden “Persepolis,” a graphic novel about the author’s upbringing in Iran, from its 7th-grade curriculum over worries that the content is too violent. Luckily, most of the city’s students seem unable to read anyway. Local booksellers are reporting higher sales as a result of the ban. … A 61-year-old Frenchman dressed himself up as a pilot and managed to bypass security at Philadelphia International Airport before crew members threw him out of the cockpit.

“YouTube is now serving one billion monthly users, equal to a little more than 14 percent of the world’s population.”

ABROAD
A wave of bombings struck Iraq on the 10th anniversary of the US-led invasion. Al-Qaeda subsequently claimed responsibility for the attacks. … The Pentagon might shuffle $150M toward GuantÃ¡namo Bay for an overhaul. No word on whether the hunger-striking prisoners, some of whom are being force-fed through tubes, will appreciate the proposed dining hall. … Russian Prime Minister Dmitry Medvedev criticized how the European Union has been reacting to the financial crisis in Cyprus, saying he could compare its actions only to those of Soviet authorities. … An Israeli heckler interrupted Barack Obama’s speech over the imprisonment of Jonathan Pollard, an American who was caught spying for Israel in the 1980s. The president responded that the harassment made him feel at home. … A new book alleges that the US Secret Service almost shot Iranian President Mahmoud Ahmadinejad in 2006. The agency’s spokesman dismissed the charge as inaccurate, admitting that while an unfortunate incident did occur, the book’s date and circumstances are completely wrong. … Newlyweds went diving in South Africa and found themselves inches away from being torn to pieces by a shark that didn’t care too much for their protective cage. “Good video but it would’ve been much better if the shark ate both of the people in the cage,” one man said.

ONLINE
Microsoft revealed that the company received 75,378 law-enforcement requests for user information in 2012. More than 137,000 accounts were potentially affected, but only 0.02% of the requests resulted in the disclosure of customer content. … A hacker named “Guccifer,” who apparently has a passion for nice leather and human sacrifice, leaked Hillary Clinton’s Benghazi emails after breaking into a former White House aide’s email account. … Child porn went viral on Facebook when a video of a grown man sexually abusing a young girl garnered an estimated 32,000 shares and 5,000 likes. The social-networking website took it down after eight hours. … YouTube is now serving one billion monthly users, equal to a little more than 14 percent of the world’s population. … Actress Amanda Bynes said on Twitter that she wants rapper Drake to “murder [her] vagina” but was quickly reminded by Red Eye contributor Andy Levy that “Chris Brown [is] probably more likely to do that.” Levy deleted the Tweet shortly thereafter. … NBA fans crowned a mystery man known only as the “Ice Cream Guy” King of the Internet when cameras caught him refusing to share a mint-chocolate-chip ice-cream cone with his girlfriend during the Magic v. Pacers game.