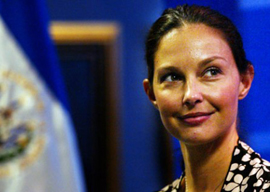 HOME
The City of New York agreed to pay Occupy Wall Street $365K for stomping all over its book tent when the NYPD raided Zuccotti Park in November 2011. … Senate Minority Leader Mitch McConnell asked the FBI to investigate how Mother Jones obtained an audio device that secretly recorded one of his reelection campaign’s strategy meetings. On tape, McConnell aides talk about targeting the emotionally twisted past of Ashley Judd, who allegedly “had a mental breakdown in the ‘90s,” among other things. … Arizona postal workers found explosives in a package mailed to Sheriff Joe Arpaio. The ATF detonated the package with a water cannon and is now following up on an investigative lead. … The National Council of Resistance of Iran opened a new office in Washington, DC, one block away from the White House. The organization was removed from the US government’s terrorist sponsor list seven months ago. … A Texas college student allegedly stabbed 14 people before being arrested. He reportedly told police that he has fantasies about wearing his victims’ faces as masks. … The US Treasury says it expects to collect a record $2.7 trillion in tax revenue this year. Rep. Dave Camp said that Congress anticipates revenues doubling over the next decade. … A California man “used several saws” at Home Depot to saw his arms down to the bone while in the store.

“A California man “used several saws” at Home Depot to saw his arms down to the bone while in the store.”

ABROAD
Margaret Thatcher died. The UK’s “Iron Lady” suffered a stroke and will be buried on April 17th. … The Sun published what it claims to be photographs of Kim Jong-un performing in a school production of Grease. Others insist the featured teenager is Kim’s older brother Jong-chul, which may explain why he was passed over as a successor. … Museum executives shut down the Louvre after its 200-man security force went on strike, citing pickpockets as the reason they can no longer work. According to one union member, “They threaten guards by telling them that they know where they live.” It is unclear if the guards understand their job description. … Leftist British MP George Galloway blamed North Korea’s aggression on the United States, which he claims “invaded Korea, killed millions of people, [and] divided the country.” He also praised the country’s “innocent culture” for not being “penetrated by globalization and by Western mores.” … Thieves in Germany somehow made off with 5.5 tons of stolen Nutella, a score worth about $20K.

ONLINE
The value of Bitcoin plummeted nearly 60 percent during a single day of trading at the Mt.Gox exchange. Many speculated that a DDoS attack caused the panic. A spokesman clarified that it was only the result of poor infrastructure, which couldn’t handle the influx of new accounts (about 60K in the first few days of April). … LulzSec hacker Ryan Ackroyd pled guilty to one count of carrying out cyber attacks under the screen name “kayla.” The group is responsible for breaching numerous websites, including those of Sony and PBS. … The ACLU revealed a March 2011 update to IRS guidelines stating that even without a warrant, the tax agency “can obtain everything in an [email] account except for unopened e-mail or voice mail stored with a provider for 180 days or less.” … Rep. Stephen Cohen flirted with singer Cyndi Lauper via Twitter: “great night,couldn’t believe how hot u were,” he said. “see you again next Tuesday.try a little tenderness.” Cohen maintains the Tweet was a ruse meant to poke fun at media outlets. … A Redditor is accused of publicly confessing to murder with a meme, although he claims it’s all a joke. He allegedly killed his sister’s “abusive meth addict boyfriend” by injecting the unconscious man with his drugs, which police later ruled as an overdose. He deleted the account when other users published his personal details online.