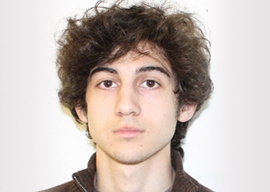 HOME
Two bombs exploded at the Boston Marathon. A female restaurant manager, a Chinese graduate student, and an 8-year-old boy were killed, and nearly 200 others were injured. Federal agents pieced together that a black bag and pressure cooker were used to create the explosives. The FBI released video of two main suspects, who were later identified as Russian-born Chechen brothers Tamerlan and Dzhokhar Tsarnaev. Tamerlan died in a gunfight with police. … The Senate voted down the Manchin-Toomey amendment, which would have expanded mandatory background checks to cover sales at gun shows and on the Internet. President Obama called it a “pretty shameful day for Washington” and claimed “the gun lobby and its allies willfully lied about the bill.” … A Mississippi man was arrested after he allegedly mailed letters containing ricin to the White House, a US Senator, and a local judge. Elvis impersonator and registered Democrat Paul Kevin Curtis, 45, maintains that he did not commit the crime. He arrived in court wearing a Johnny Cash T-shirt. Curtis authored a book claiming to expose a secret organ-harvesting ring. … A fertilizer plant blew up in Texas. The explosion registered as a 2.1-magnitude earthquake. One report estimates that it killed 35 people, including ten first responders, and injured more than 160. … A Hooters franchise temporarily closed on Hollywood Boulevard after an apparent beer-and-boobs connoisseur told everyone that he had a bomb in his lunch box. The LAPD swept the restaurant, and the suspect later admitted that the threat was a joke. It is unclear why he brought a lunch box to Hooters. … The homeless man accused of stealing an iPhone from a child in Greenwich Village pleaded that the deal was fair because he gave the three-year-old boy $2 for it. A judge set bail at $10K.

“The homeless man accused of stealing an iPhone from a child in Greenwich Village pleaded that the deal was fair because he gave the three-year-old boy $2 for it.”

ABROAD
The US government is nearing a $10-billion arms deal with Israel and other Middle Eastern nations. A senior administration official said that the deal, which will include missiles and warplanes, will help “our Persian Gulf partners…to address the Iranian threat.” … German MPs, led by Chancellor Angela Merkel‘s party, defeated a motion to impose gender-based employment quotas. The measure would have forced companies to increase the number of women on their boards to 40 percent by 2023. … Britain and France told the United Nations that they have obtained soil samples proving that Syria has used chemical weapons more than once since December. The US has yet to confirm these findings. … According to diplomats, Iran has tripled its installations of advanced uranium-enrichment machines within the past three months. They noted that the machines are not currently functional and that many are only half-complete. … Men from the United Arab Emirates were deported from Saudi Arabia when police officers determined that they were “too handsome.” Officials said they feared that female visitors, who are now allowed to ride bikes, would be too tempted by them.

ONLINE
Reuters accidentally published George Soros‘s obituary. The news agency announced that Soros had kicked the can “at age XXX,” prompting Twitter users to lament the death of such an old-looking 30-year-old. Reuters called Soros, who unfortunately remains very much alive, a “predatory and hugely successful financier.” … New York Times columnist Nicholas Kristof Tweeted that the Boston explosions should act as a reminder that Senate Republicans are to blame for blocking ATF appointments. … Before police fatally shot him, Boston Marathon bombing suspect Tamerlan Tsarnaev was a fan of YouTube. An account linked to his name includes playlists titled “Terrorists” and “Islam.” His most recent subscription was to a channel called “Allah is the One.” … Netflix began streaming its newest original series, Hemlock Grove, directed by torture-porn aficionado Eli Roth.