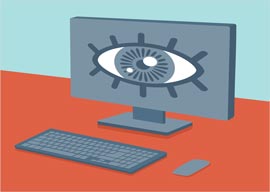 Despite being presented with (singular) evidence to the contrary, I clung weakly to my belief that few Professional Conservatives” ¢ were poseurs “who were only in it for the money.”

For one thing, I wondered, how could anyone convincingly pull off such a scam for years at a time without being exposed from without or collapsing under the strain from within?

Well, thanks for nothing to the reader who reminded me about Hal Turner.

But then literally the next day, VICE.com fanfared the following story:

(Once again, I really need to be careful what I write about at this place…)

VICE reported that one Chris Lloyd had got himself acclaimed the Tory candidate in his Montreal riding, despite (he insists) being candid about his identity as “an artist doing a project involving politics.”

“As soon as I said ‘art’ and ‘project’ (…) their eyes kind of glazed over a bit,” Lloyd is quoted as saying. But why not? Those local Conservatives know they stand little chance of unseating the reigning prince of Papineau, Justin Trudeau, no matter who they put on the ballot.

Since the CBC were actually behind this expose, none of this guy’s info must have been difficult to find, because nobody at the CBC works that hard.

And sure enough, one of Lloyd’s “art” projects “ “writing a letter to the prime minister every day since 2001″ “ has been exhibited in over a dozen galleries.

It’s true: a compulsive epistolary activity that was once the domain of precocious children and grown up cranks (including potential assassins) is apparently no longer considered a disqualification for public office. Why kill politicians when you can be one yourself?

“But don”t they vet candidates?” some of you are wondering. Maybe you still think newspapers and book publishers employ proofreaders and copy editors; that the Secret Service is an elite cadre of no-nonsense professionals; or, I dunno, that everyone is spying on you.

Yeah, I know the whole “privacy” thing is a big deal for many libertarians and conservatives, but I can”t get that worked up about it.

I”m an old fashioned girl who still remembers when thinking the government was spying on you was a sign of insanity and not sophistication.  Yes, technology has evolved, but come on: It’s like that old joke about how the women protesting outside the abortion clinic are the ones nobody would want to impregnate anyhow. And muttering hoary Joseph Heller epigrams like some Santeria spell merely proves you”re fluent in mid-20th century clichÃ©s. Congrats on that.

Besides, even important people aren”t that important.

Have you ever listened to FBI surveillance tapes of Mafiosi? They”re one step up from an old Woody Allen New Yorker essay:

Be honest: Isn”t 98% of your online detritus about as scintillating?

And how often do we read that “the authorities were tracking” this or that nutjob for years before said loony struck anyhow? If they can”t be bothered picking up the Garland, Texas shooters beforehand (any more than the Conservatives can”t shift themselves to Google their candidates) then are They really on their way to nab you?

Now let’s assemble the courageous whistleblowers and truthtellers who are the public face of Y2K-like privacy hysteria: