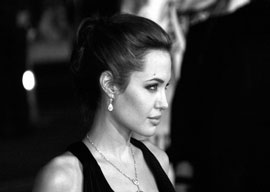 I recently heard comedian Nick DiPaolo say, “I don”t think I can watch Angelina Jolie beat the shit out of six Green Berets. My suspension of disbelief just can”t take it.” He was describing the art of ruining a great movie with propaganda, which is becoming the norm. The morbidly obese Melissa McCarthy is clenching her fists and making men cry while adolescent girls annihilate street thugs for using homophobic slurs. I”ve discussed men’s role in creating this mess before, but it’s everywhere now and it’s permeated every part of our culture. If you just landed here from outer space, you”d assume cis white scum like DiPaolo are functionally retarded and Western society is run by white women, black men, and a smattering of gays. We”ve gone from providing women and minorities with inspiring role models to turning them all into infallible gods who are constantly held back by bumbling white men.

Homer Simpson is borderline retarded, but his daughter Lisa deserves the Nobel Peace Prize. Peter Griffin and Al Bundy are equally useless (outside of the part where they work their fingers to the bone to provide for a bunch of ingrates). When my kids turn on cartoons all I see is girls in lab coats and blacks with glasses solving complex problems while some white boy stumbles in and blurts out, “DUH!”

Adult programming is the same. Is there a head of surgery on TV who isn”t black? Sir Lancelot is now black. The Ghostbusters are women. Thor is black. Mad Max is a woman. Spider-Man is black. Ocean’s 11 is all women. Meat Loaf is gay. The Honeymooners are black. James Bond is black or maybe he”ll be gay. At the beginning of the Annie reboot where we discover she’s now black, she performs for her classmates and tells them welfare-state pioneer FDR was the greatest president ever because he brought us the New Deal. Later in the movie, we discover Annie can”t read. Nice utopia, you Feel-Good Communists. That’s what’s so annoying about watching these people push us into the passenger seat. They can”t drive. The fake world they”re forcing down our throats is as boring to watch as it is totally implausible.

“How can you win an argument with an empowered woman who has a black man in her mouth?”

“Remember when you said men are superior drivers?” asks a wimp’s smug little girlfriend in an ad for Allstate insurance. “Er, yeah?” he stammers as she pulls a check from her purse and”with a black man’s voice”says, “Then how”d I get this safe-driving bonus check?” Uh, I don”t know, lady, maybe because you”re good at driving? We never said all women are bad at driving. We know Kitty O”Neil set the land-speed record, but we”ve noticed that overall, women tend to be inferior drivers. Ever seen NASCAR? The boyfriend in the commercial wouldn”t dare fight back because, well, how can you win an argument with an empowered woman who has a black man in her mouth?

Cuckmercials, as I shall now be calling them, are totally explicit about portraying “American husbands as feckless wimps.” That quote refers to the Kia commercial where a beta dad suggests they park somewhere safe as mom runs the car “up the gut” and parks on a hill before topping the whole thing off with “Someone has to wear the pants in this family.” The message is no longer that women are equal. It’s that women are the new men and they”re doing a way better job. Commercials are propaganda because it’s good for business. Campbell’s Soup realizes only a miniscule fraction of their clientele are gay parents, but having two fathers quote Darth Vader’s “I”m your father” gets all the virtue-signaling progressives who might otherwise go with Progresso.

Star Wars: The Force Awakens is a perfect example of this anything-but-dad mentality. The movie starts off with a female protagonist who is so perfect, she has no room to grow. At least Luke knew he was a douche and wanted to get over it. This Ã¼berwomensch knows everything about everything and can beat up anyone. She knows more about the Millennium Falcon than Han Solo and she’s only been in it for minutes. When she faces the new Darth Vader, Kylo Ren, she only needs to hear the word “Force” to instantly become a way better Jedi than him. At the end of the movie (spoiler alert) he is sent away for more training so he can be worthy of fighting this female gift from God. The other hero of the movie is a black man and he’s equally dull. He’s so perfect and pure and wildly naive, he’s basically a useless baby. Both of these characters are so pure of heart, they are totally devoid of character. Otherwise it’s a great movie, so to walk out and let your $17 go down the drain is to let the cultural terrorists win. Have no fear, fellow cis scum, I have a solution.

All you have to do is focus on the one moment of weakness where they actually convey something realistic about dads and our role in building Western culture. It can be like finding a needle in a haystack, but postmodern critical theory is all about bending the story to fit your agenda, so if they can bend it away from reality, we can bend it back. When watching a female Jedi reboot the Star Wars franchise and solve all the universe’s problems you simply say, “Of course this woman is extraordinary. That’s why she’s going to save the universe. You wouldn”t have some random slob taking down the First Order.” When you see the black guy babble like a toddler, you forgive his lack of personality. “He just left the stormtroopers,” you say to yourself. “He’s a fish out of water. Of course he’s acting like a ridiculous baby.” At the end of the film (another spoiler) we meet Luke Skywalker. “Well, they all basically worship him,” you tell yourself. “In that sense they”re respecting all the hard work white men have done in the past. He’s Jesus in a way. It’s a Christian film.” To enjoy any kind of pop culture these days, you inject your suspension of disbelief with steroids and comb through hundreds of metaphors looking for something that even sort of resembles a plausible reality.