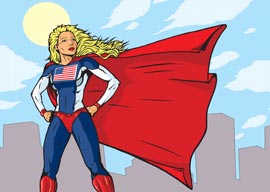 So I was watching this old-timey western called Support Your Local Sheriff the other night. There’s a scene where the female protagonist storms into the courtroom and demands to be heard. The men in the courtroom act flabbergasted, and she tells them she’s just as valid as any man, and goldarn it, she matters!

That’s when it hit me. Feminism was created by men. The movie was written by a man, William Bowers. Men from an all-male casting agency likely chose this brassy broad (the actress is Joan Hackett) and stuffed those words into her mouth. It’s a very male thing to want to storm into a room and tell a bunch of authority figures they ain”t all they”re cracked up to be. We like the idea of a woman behaving like that, because we behave like that, and we assume what’s good for the goose is good for the gander.

Men are the original feminists. Female men’s rights activist Karen Straughan talks about this a lot, and points out that before women could vote, it was men who wanted to bring back the whipping post to punish guys who hit their wives. A man sees a woman getting abused and thinks “Beat him!””whereas a woman would be more likely to want to work it out. I no longer believe the suffragette movement was made up of women who were mad as hell and not going to take it anymore. I now think it was men pushing them from behind while saying, “Aren”t you mad as hell? You shouldn”t take this anymore.”

Women aren”t fighters by nature. They aren”t “kick-ass.” They”re more about their immediate surroundings than changing the world. Studies show young male chimps are drawn to toy trucks while young females like dolls. It is inherently male to want to control things across the world and run over anything that stands in our way. It is inherently female to want to nest and nurture and make the home a safe place to be. When male chimps write parts for women, they put a truck in her hand and say she’s in the driver’s seat. This is what girl power has always been about.

Look at virtually every single feminist anthem. “Girls Just Wanna Have Fun” was written by Robert Hazard. The song “Girls” Night Out“ was written by Brian Allen. BeyoncÃ© is regularly mocked for having men write her songs, most recently by Linda Perry, a very prolific songwriter in her own right who is also a lesbian. We”re told “I am Woman” (the “hear me roar” song) was written by Helen Reddy and Ray Burton, but I”m guessing Reddy’s credit was a favor. She didn”t really write anything before or after that, but Ray Burton’s churned out dozens of songs. They did the same “cowriter” trick with “Redneck Woman””penned by the incredibly prolific John Rich”and “Man! I Feel Like a Woman!” by Robert John “Mutt” Lange.

When I was a teenager, we all moshed to “Suggestion” by Fugazi, which starts with a man singing, “Why can”t I walk down the street free of suggestion?” and “Is my body the only trait in the eyes of men?” The song is vocalist Ian MacKaye screaming with anger as a woman and that’s exactly what it sounds like. Women don”t roar with rage when you wink at them, but when gays hit on straight men they often end up pulverized like the dude from Bronski Beat.

These aren”t feminist anthems. They are men telling pretty woman what to say. “It’s Raining Men” was written by Paul Jabara and Paul Shaffer (of David Letterman fame) and you can tell. Women don”t want to go out and get “absolutely soaking wet” with men falling from the sky. That’s what men want women to want. The iconic depiction of an empowered woman is really just a man.

Last night, I was watching the new Disney hit Big Hero 6 with the kids. There are many disturbing things about it. San Francisco has been taken over by the Japanese and nobody cares. Entrepreneurs are psychotic villains who try to kill inventors and steal their ideas. However, what struck me most was the prevalence of the “Kick-ass chick” archetype. In a car chase scene, when the evil capitalist is trying to kill the good guys, some big stupid man is driving the getaway car. Then a young girl rips him out of the driver’s seat, grabs the wheel, and starts kicking ass. The men in the car stare wide-eyed as she tears through the streets, evading capture. They looked like the men in the courtroom from Support Your Local Sheriff.

You see the same character played by Sarah Silverman in Wreck-It Ralph. Women don”t do this in real life. No woman has ever won NASCAR. They can barely drive a motorbike over a log. Yet we keep telling them they”re kick-ass and sticking them in the driver’s seat. This is because we love looking at fast cars and we love looking at hot chicks. Ford Mustang recently released a prank video where some “dumb blonde” pretends she can”t drive but reveals she is actually a stunt driver after blowing everyone’s minds with some intense burnouts. This is presented as a feminist statement that shatters stereotypes, but it’s just men making women do man stuff because they like both.

On a recent episode of Mob Wives, one of the loudmouthed sluts yells, “It takes balls to admit you”re wrong, and if she doesn”t apologize to me, SHE HAS NO BALLS!” I don”t want women to have balls. I want them to have vaginas. I”m not saying I want them to stay at home fluttering their lashes and handing me a steak while wearing high heels (though I wouldn”t complain if my wife gave that a try). I”m saying being kick-ass only appeals to the nerds who play video games and want the Tomb Raider they”re looking at to also have big tits. It’s not feminist to see a chick do a backflip and blow a monster’s head off. It’s male-ist.