Put a Gag on Hugh Grant 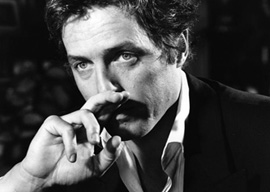 To all men’s eternal detriment, a conceited fool in the form of has-been actor Hugh Grant, self-appointed spokesman and shop-floor representative for chauvinist bigotry, spoke out this weekend on BBC’s Newsnight program on behalf of gag orders designed to protect super-famous miscreants” privacy.

With unstinting arrogance, Grant had the gall to state that “Women don”t behave as badly as men, that is quite clear. Men are naughty.”

Oh, dear God, can he really believe that? Unbelievably yes, unless he is such a good actor that he has us all fooled, and that he most certainly is not. Does it not occur to Grant that in order for these naughty men to be naughty, they require equally naughty women to satisfy their naughtiness? On the night Grant chose to exercise his naughtiness with the reciprocally naughty Ms. Divine Brown, the LAPD saw it all too clearly”at least enough of it to bring charges. Some might say that Ms. Brown was only there to get a closer look at Grant’s white convertible. What a naughty man was poor Hugh Grant!

“May heaven preserve us from middle-aged men who insist on living in the Middle Ages.”

All this is in response to the recent furor over super-injunctions, court-issued gag orders designed to protect the rich and famous from being exposed before the public for what they really are.

There is a massive difference between revealing that which is known to be true and that which is thought to be. The recently threatened exposÃ© concerning Grant’s ex-girlfriend Jemima Khan and Top Gear presenter Jeremy Clarkson seems profoundly damaging in that there has been no evidence so far to corroborate what appears to be a deliberately malicious attack. If News of the World were still operating their recording network, this might prove otherwise, but for the moment that studio has been forcibly shut down. But if such an allegation were found to be true beyond any reasonable doubt, does the public have a right to know? I say yes. Those who choose to live in the spotlight also choose to die in the spotlight. Applicants for the super-injunction do so to protect their own skin. That is because when the shit hits the fan, most men are pathetic moral cowards.