Queerer in the Bathroom 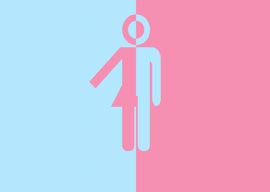 Last week, a 17-year-old boy in a wig and a skirt made national headlines by demanding to use the girls” restroom and locker room at his small-town Missouri high school. The young man, whose real first name has not been released, began publicly calling himself “Lila” this year, proudly proclaiming his “trans” identity. Biologically, he’s a boy. He’s not doing hormone therapy or anything body-altering. He’s a boy in a wig.

Lila was offered the use of a gender-neutral bathroom by the school administrators, and he refused it. But unfortunately, Lila’s desire to pee and change with the girls doesn”t sit well with”guess who?”the girls. Two hundred students staged a walkout at the school to protest “boys in the girls” room.” The media condemned the students” “hatred” and “intolerance,” and administrators voiced concerns about potential lawsuits and federal-government reprisals for not letting young Lila shake his member in front of the cheerleading squad.

I”ve always appreciated the murky gray areas that exist between “totally right” and “totally wrong” in most political and ideological disputes, but I don”t see the gray areas here. He’s a boy. In his mind, he might see himself as Audrey Hepburn reincarnated, but he’s a boy. It’s hard for me to understand how other people see this issue differently, but many do, including certain big-city mayors. I reached out to an old friend, someone I”ve known since my own misspent school days. This friend is an extremely outspoken LGBT-rights supporter and online activist (and the parent of a gay child). I asked her if she could help me understand the other side of this hot-button issue.

My friend shared her thoughts about the Missouri case:

Fear (or is it prejudice?) has been spread about trans girls or boys abusing their gender identity to attack other girls and boys in the bathroom. It has gotten to the point that my own cisgender daughter was stopped from going into the women’s restroom at her college by administration because, from the back, they thought she was a boy. My daughter is very feminine, with short hair and a punk aesthetic. In other words, this bathroom falderal has backfired onto straight, cisgendered peoples” lives.

These are not men dressed in drag going in to rape innocent damsels! These are women who went into the restroom to powder their nose or tinkle, like every other woman who goes in there. Yet, every time a trans woman uses a restroom, she puts her life at risk. Using the men’s room would most certainly result in harassment at minimum.

But the school offered Lila a safe, unisex, staff-only bathroom, and he refused the option. I reminded my friend that a female high school classmate of ours was sexually assaulted by a boy who followed her into the girls” restroom on campus. What saved her from further harm was that a teacher came to investigate and broke up the assault. I argued that a boy going into a girls” restroom must always remain a red flag. She responded:

Boys should not be allowed to use the girls” restroom. See, the thing is, it’s not like suddenly a child is going to school all boy, masculine, maybe even in sports, and then comes to school in a dress declaring they are now a girl. When a child is trans, they know from the get-go. These are not just any boys who declare, “I”m a girl now!” Transitioning takes time. A boy should never go into the girls” restroom. And unisex restrooms only serve to further separate, where we should be teaching our children to be inclusive. It’s that people need to realize that gender and sexual orientation do not mean sex maniac. Even for teens.

“A boy should never go into the girls” restroom.” Okay, but what defines a boy? Lila might sincerely desire to one day “transition,” but at present he’s a boy who decided to change his name and wear women’s clothing. Also, his personality change could be due to psychological instability (sudden personality shifts can be a sign of oncoming mental illness). My friend replied:

What defines a boy? What defines a girl? I believe the answer is much more complex than just what is betwixt a person’s legs. The answer is chemical, emotional, physical”but not just what we can see with a glance. The answer is not for another person to decide, though. It is not a decision for anyone involved, not even the transgender person. It just is. Lila Perry has identified as female since she was 13, so this is not an overnight thing. This is not a boy donning a wig and skirt suddenly and proclaiming, “I am woman, hear me roar!” But I think worst of all is equating transgender people with instability and mental illness. What an old ancient idea! Right up there with leeches, cupping, and the four humors.

I appreciate my friend’s input. And while it helped my understanding of the other side of this debate, I find myself unswayed. I”m being asked to swallow an article of faith”that a boy who says, “I”m a girl” magically becomes one (with corresponding legal recognition). “Say it/be it” gender reassignment is a quasi-religious belief. It should not become enshrined in law.