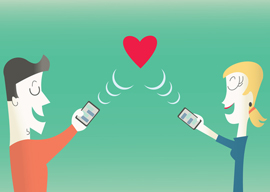 So it looks like I”m not really white after all. Possibly not even female.

I”m basing this on the findings of OkCupid, the dating site that’s also a data site. A few times a year, they pour some of their millions of user profiles through an analytical sieve and serve up the clickbait-y results to eager news outlets.

Back in 2010, OkCupid selected around 500,000 profiles created by self-described “white” people, then “isolated the words and phrases” that made them “distinct” from those of other races. The most commonly Caucasian-used words were displayed in tag-cloud style infographics that had the uncanny appeal of found poetry.

That’s why I”m starting to wonder about my genetic makeup, because according to OkCupid, white women are very, very interested in … the Boston Red Sox. Then in someone named “Jodi Picoult.”

Of the dozens of hot button white woman words, the only ones that resonated with me were “mascara,” “coffee,” and, I guess, “thunderstorms.”

I”m assuming OkCupid cofounder, Harvard math major and “big data” junkie Christian Rudder was the one who cooked up his company’s elevator pitch: “We use math to get you dates.” I feel safe making that guess because, well, I dated a mathematician and he sounded a lot like Rudder, here reflecting on that “white female” keyword cloud:

It’s also amazing the extent to which their list shows a pastoral or rural self-mythology: bonfires, boating, horseback riding, thunderstorms. I remind you that OkCupid’s user base is almost all in large cities, where to one degree or another, if you find yourself doing much of any of these things, civilization has come to an end.

For an American, Rudder displays a refreshingly un-P.C. fascination with and candor about racial differences that screams both “Asperger’s” and “I sold my company for $50 million, so.”

You see, according to OkCupid’s latest “study:”

Either they really are that ignorant or no one at the Daily Mail, or even OkCupid, has heard of the Bradley Effect or just plain old social desirability bias. And those two phenomena kick in when people are responding to more or less anonymous polls. How likely, in our current Salem-esque environment, are individuals to admit they prefer their own kind on a website that displays their name, location, and photograph?

I”d love to get Rudder’s take on dating sites of a rather different kind.

My Wikipedia entry used to include evidence of my supposed “white supremacist” views. Without a trace of irony, one such exhibit was my observation that “the matrimonial classifieds in Toronto’s South Asian papers describe desired complexion shades (the whiter, the better) in a manner that would make a Boer, well, blush.”