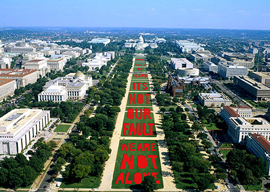 Remember the AIDS quilt? Back in the 1980s, gays swiped another quaint, wholesome, colorful thing (rainbows, anyone?) to trick us into thinking everybody could get AIDS, and not just stubbornly promiscuous male homosexuals (with heroin addicts who were gonna die anyhow sprinkled on top).

“By stitching our stories together,” say the rape quilt ladies, “we are creating and demanding a public space to heal.”

I demand the creation of a public space for me to puke.

“Blanketing over one mile of the National Mall, thousands of fabric squares will be stitched together to spell “NOT ALONE.””

And the best part?

“Not that it’s impeded their success, but the left is creatively bankrupt. LBJ was skinned by maggots ages ago, but “progressives” still chant “Hey, hey! Ho, ho!” and ho-ho-hope their latest enemy’s name has three syllables.”

“The Monument Quilt gives churches, schools, towns and our country clear and accessible steps to support survivors of rape and abuse when often, people don”t know where to begin.”

That’s weird, because I just Googled “dog dials 911″ and got 123,000 results. Yet these First World broads and their beta male enablers “don”t know where to begin” reporting a violent crime?

Just kidding. Progressive “activists” already know everything! No, this rape quilt is designed to “raise awareness” about yet another horrible thing everybody already knows about. It’s more of that empty calorie activism that females in particular find so irresistible. As Canadian blogger Kate McMillan says, “If women ran the world, we”d still be living in caves”but with really, really fancy curtains.”

Not that it’s impeded their success, but the left is creatively bankrupt. LBJ was skinned by maggots ages ago, but “progressives” still chant “Hey, hey! Ho, ho!” and ho-ho-hope their latest enemy’s name has three syllables. (If it doesn”t, demonstrators simply substitute the ever-unpopular “U.S.A.”)

Now they”ve been reduced to retrofitting a Reagan-era symbol for the 21st century. This rape quilt is the Teenage Mutant Ninja Turtles of protests.

Few objections have been raised, but give it a couple of months, and complaints from wymyn on Reddit will percolate up to Slate, Salon, Jezebel, and Bust:

Then defenders will counter that humble quilts were in fact noble symbols of resistance: abolitionists along the Underground Railroad hung “coded” quilts on clotheslines to steer runaway slaves to freedom.

Except that, like 90% of the stuff leftists believe (and teach your kids), that story is completely made up. Matter of fact, liberal do-gooders started spreading that “slave quilt code” rural legend around the time the AIDS quilt project began. Oddly enough!

This stupid quilt project is further evidence that rape is the new global warming.
I”m old enough to remember when the Washington Post at least pretended to be a real newspaper. These days it reads like the newsletter for a rape crisis center.

In this July 1 op-ed (topped off with a “trigger warning,” no less), Richard Morgan insists, “My own rape shows how much we get wrong about these attacks.” If his story is to be believed, what it really shows is that taking a bus from Washington, D.C. to New York City to have sex with a virtual stranger”but not THAT much sex, you see”is a super stupid thing to do.

I”ve never heard anyone utter these expressions in my life.

And Morgan hasn”t pressed charges against his attacker. Too traumatic. Unlike writing about his ordeal in the Washington Post. Should this skeevy gentleman in NYC turn out to be another Jeffrey Dahmer, I guess that’s not Morgan’s problem.