As someone who wasted a few years of his life teaching in undistinguished academic institutions, I could never figure out why Hollywood would bother making movies about college professors and why anyone would want to spend his time or money watching for two hours a disheveled and grumpy middle aged man, portrayed as a misogynist and a misanthropic, trying to overcome his writer’s block while forcing himself on his female (and occasionally, male) students. Like who cares?

But who knows? Perhaps after getting tenured and spending the rest of my life teaching illiterate and apathetic kids about the same esoteric and boring subjects year after year after year, writing articles and books that no one reads, and being surrounded during long faculty meetings (where, as Dr. K. once noted, the fights are so bloody because the stakes are so small) by obnoxious and emasculating feminists and lefty guys with beards and/or pony tales, I would also have probably lost my own lust for life, or my so-called “life.”

After all, most college professors”and I”m talking here about the humanities and social science departments”recognize that unlike janitors, hairdressers and personal trainers, no one really needs their services. Students sign up for classes in political “science” (which is what I was teaching) or Shakespeare, because they tend to be painless and inflated with a lot of “A’s.” If you really wanted to study French lit or American history, all you had to do is pick up a few good books in the library and read them. You certainly didn”t t have to force your divorced father, burdened with a huge alimony and a new wife, to pay $$$ (I”m not sure what’s the cost of a “credit” is these days) and to listen to an unkempt and bearded grump (don”t these guys get paid enough to join a gym or visit the dentist?) read his notes for the thousandth time.

In short, there are Alpha Males”and then there are college professors who wake up late in life in their cluttered office, as they wait for another student to knock on the door and ask them for an extension on their paper, finding out that all they have to show for their efforts is their tenured position. Isn”t that exciting? 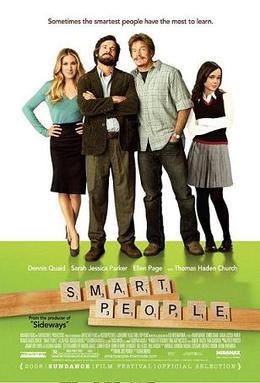 That’s a great title for film critics, like “if you”re smart, don”t go to see “Smart People”.” Well, here is mine: A boring film about Boring and Unpleasant People, led by Quaid’s Lawrence Wetherhold, and including his teenage daughter, Vanessa,  played by Ellen Page (straight from Juno; here she his using Yuppie slang instead of teenage lingo); his loser “adopted brother””as our hero reminds us again and again””Chuck” (Thomas Haden Church from “Sideways“), who is chaufering his injured brother around (in exchange a roof over his head); and in her worst movie part ever (and she had many), Sarah Jessica Parker (no sex and no city here), as Janet, a bitchy ER physician who once had taken a class with Wetherhold and still has a crush on her not so Mr. Big, who has been widowed for a quite a while. There is also Wetherhold’s metro-sexual son who is sleeping with his dad’s research assistant and some other shallow characters one encounters in academic milieus. And the film was directed by Noam Murro (never heard of the guy) and written by Mark Poirier, the author of the best-seller novel Goats (which I”ve read”not!)

“Smart People” seems to be drowning in beaten-up clichÃ©s and sophomoric jokes. First, there is Wetherhold as the cinematic archetype of the college professor who cannot get his book published, And then there is Vanessa, an overachieving Young Republican (she has a big poster of Reagan in her room) who admires, well, Dick Cheney, and who is studying a lot and gets a perfect score on her SAT, which is another way of telling us that she is cold and calculating. A Republican Stratford Daughter, if you will. And”horror of horrors!”she is a virgin, except for her infatuation with the Dick Cheney, that is. We are supposed to buy into the notion that behind the facades of the old and young Wetherhold hide warm and wonderful human beings that are just waiting to come out of their exterior shells, because, you know, deep down, they are good enough, they are smart enough, and, doggonit, people like them!

The media for these remarkable personal and intellectual transformations are “Chuck” and Janet. “Chuck” takes Vanessa to a bar, where she gets drunk, makes a fool of herself, smokes dope, and gets a bit slutty, which are (I suppose) the first steps on the road towards recovery from elitism to the love of humanity. At the same time, “Chuck” encourages his emotionally retarded brother to get a life while Janet teaches him to use a condom during not very arousing sex scenes. But he fails in that exam, and oops… they have twins. And the professor even gets to sell his book, You Can”t Read, to some publisher in New York, while his son’s poem is accepted by the New Yorker.

Where is Liz Taylor and Richard Burton when you need them? Buy or rent “Who’s Afraid of Virginia Woolf?” (which is based on a play by Edward Albee) a great film in which a bunch of professors meet and have a few heated arguments about this and that, and play such “games” as “Humiliate the Host,” “Get the Guests,” “Hump the Hostess” and “Bringing Up Baby.” Compare Burton who plays George, a history professor, and Liz as his wife, Martha, to Dennis Quaid and Sarah Jessica Parker in “Smart People.”

And remember what Gloria Swanson playing Norma Desmond says in Sunset Boulevard: “I am big. It’s the pictures that got small!” “Smart People” demonstrates that the scripts, the actors, and the movies are so small and insignificant these days.

I agree with one of our best screenwriters, David Mamet that part of the problem lies with the writers. Here is what Mamet had to say on the subject in a June 2008 issue of GQ:

Y”know, I grew up in a different generation. I grew up after World War II, and boys did different things in those days. You went camping. You went hunting. You boxed. And the image of a writer, to someone starting off in those days was not some schmuck who went to graduate school. It was Jack London, Nelson Algren, Ernest Hemingway. Especially coming from Chicago”a writer was a knock-around guy. Someone who got a job as a reporter or drove a cab. I think the reason there are a lot of novels about How Mean My Mother Was to Me and all that shit is because the writers may have learned something called “technique,” but they”ve neglected to have a life. What the fuck are they gonna write about?”

Indeed, as Alex Pappademas who conducted the interview with Mamet pointed out, Mamet has “captured the dark side of the modern male mind”a place simmering with misogyny, greed, lust, and violence.” It’s a world where Alpha Males”and not girlie professors”do a lot of fighting in noir urban settings, marking their territory as they jockey for power and wrestle for control over other men and women, which is what they do in his latest film which Mamet”who announced recently that he was “No Longer a ‘Brain-Dead Liberal’“wrote and directed, “Redbelt.”

In the movie, a cross between “Night and the City“ and “The Seven Samurai,” Mike, a Brazilian jujitsu instructor who runs a small martial arts academy in Los Angeles, a role played by Chiwetel Ejiofor, is a fighter and man of honor, a Knight or a Samurai, who never fights for profit. But he is backed into a corner as a result of a complex con job (a common theme in Mamet’s films) and is forced to violate his personal ethics in order to save his business and marriage and protect his friends while maintaining his integrity and sense of pride. It’s not a movie about the so-called lives of our college professors”which is one reason that I liked it.