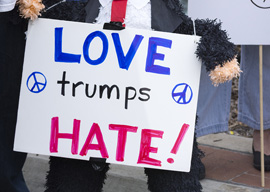 “What we care about is permanent protection, dignity, and respect,” blurted out Alex Uematsu of the pro-illegal group Cosecha Movement on Tucker Carlson Tonight. “I”m for those things too,” Tucker responded. Carlson has been eating liberals alive on his new show and all it takes is a few simple questions. When he asked Canisius College history professor RenÃ© de la Pedraja why people flee Cuba, the pink-cheeked PhD said, “They left their wives behind. They want to start a new life.” This was clearly a theory RenÃ© pulled out of his ass at the last minute, but this is what we”re up against these days. We are at war with a value system based on meaningless platitudes and conjecture. When you bring up data that contradicts their insane hypothesis they say, “I”m sorry”I just don”t”that sounds completely ludicrous to me,” as Million Student March organizer Keely Mullen did when Neil Cavuto asked her who was going to pay for her free-college utopia.

I went through this at a Trump rally when a frothing-at-the-mouth millennial said, “Why doesn”t the right love ISIS? ISIS kills Muslims.” Instead of considering the possibility that this contradiction proves that his hypothesis is incorrect, he turns it into a gotcha moment where Trump supporters will be duped into supporting Islamic extremism. This is the problem with their philosophy in a nutshell. It’s based on a hunch. That’s it. No fact checking. No consternation. No debate. Just a videogame plot based on what makes them feel like a hero. The ones who became educated in these fields at the various Hunch Universities across the country are even more irritating. They”re just able to use more made-up words to describe their made-up universe.

What’s particularly confusing about these people is how arrogant they are. It’s like their confidence is inversely proportional to how much they know about the topic. We get that you”re too lazy to research astronomy so you”ve chosen astrology as your passion, but why do you get so mad when we don”t also believe it? It’s fake. When you talk to someone who does research for a living such as Charles Murray or Kevin D. Williamson, you get a somber tone that leaves room for new information. Academics with a degree in bullshit, however, talk to their audience like they”re infants, literally. Check out the blacksplaining videos from MTV’s Franchesca Ramsey. That’s how day-care employees talk to children. Riley J. Dennis is a transplainer who takes time out of his busy day to deliver video essays explaining why you”re discriminatory if you don”t want to have sex with his kind. He sounds like a kindergarten teacher getting the new kid up to speed. Dylan Marron does homosplaining videos for Seriously.TV and they too have this eye-rolling, “this is the last time I”m going to explain this” tone that makes them sound like they come from the future. These people used to be esoteric freaks on the fringes of society. Today they”re mainstream. Today the president cries as he presents them with the Medal of Freedom.

The dogma of motherhood statements isn”t limited to YouTubers, academics, and random college kids at a rally. We hear this all the time from the left. They reduce the argument to something like “I love love and I hate hate,” and if you disagree, you love hate. The next thing you know, they”re holding up signs that say, “Love trumps hate,” like anyone would have a problem with that. I know a guy who was arrested on election night and he got the news Trump was the next president while in the Tombs. He said some of the black inmates were convinced they wouldn”t be allowed out now. What kind of logic is that? All black people go to jail? That’s simply not possible. Therefore, your hypothesis is incorrect. Play it through logically. Trump is going to deport legal immigrants? How? He’s going to imprison all his opponents? Who? He’s going to make it illegal to burn the flag? What? He’s going to repeal Roe v. Wade? When? He’s going to start a nuclear war? Where? He’s going to dissolve gay marriages? Why? Your belief system can”t make it past one question?

It’s frustrating talking to this half of America because they pretend to care passionately about something they haven”t looked up. They tell you we”re a nation of immigrants, but they can”t tell you how many are here. When you ask them how many illegals would be too many, they”ve rarely ever thought of that before. I”m not going to fault anyone for not being prepared for an immigration debate”politics is a boring numbers game”but why”d they bring it up? They”re pillorying people for not agreeing with them on a subject they have no real interest in.