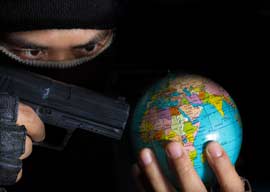 Amid all the empty, gaseous, fear-mongering bullshit we constantly hear about “terrorism,” lost is the fact that what were arguably that USA’s first anti-terrorist laws were designed to crush the KKK in the South during Reconstruction.

The Enforcement Acts of 1870 and 1871 expanded federal power under the guise of protecting Southern blacks. These laws were so aggressively enforced that they basically wiped out the Klan’s first incarnation within a year. At least temporarily, this flexing of federal muscle protected many Southern blacks. But just like the Civil War, it grossly extended federal power…as has the recent War on Terrorism.

Would it be “racist” of me to suspect that ever since the War Between the States, every political move designed to protect the “oppressed” was also designed to enhance federal power? Is it paranoid to ponder whether under all the nonsense we hear about civil rights and hate crimes and terrorism are convenient covers for what is essentially a bald-ass, butt-naked power grab?

In the wake of the recent mass murder of nine black churchgoers in Charleston, SC, many have asked why accused killer Dylann Roof isn’t being depicted as a terrorist or charged as one. They argue that if he had not been a white male basking in white privilege like a lazy beluga whale sunning his snow-white belly somewhere in the Arctic Circle, everyone would have immediately called him a sweaty, smelly, swarthy, dark-skinned terrorist.

As Osama bin Laden would have said were he alive today, that’s all a crock of shit.

“As Osama bin Laden would have said were he alive today, that’s all a crock of shit.”

When crazed psychiatrist Nidal Hasan went bonkers with a gun at an Army base in Fort Hood, TX in 2009 while shouting “Allahu akbar!” and picking off 13 victims, the feds refused to prosecute him as a terrorist. But the US Justice Department announced this past Friday that it’s investigating the Charleston shooting as a possible terrorist incident. So enough with your baseless whimpering about how white privilege will protect Dylann Roof from being charged as a terrorist. I’ve just demonstrated that reality is the complete opposite of what you’re claiming it is, and maybe one day you’ll have enough decency and honor to not only admit your errors, but to thank me for correcting you.

Dylann Roof should be tried for murder, and that’s it. Any attempts to criminalize his thought processes during the course of the alleged murders are by their very nature totalitarian.

But apparently nine counts of murder aren’t enough for some people. And apparently even a “hate crime” enhancement”which isn”t a separate charge, merely a recommendation for a longer sentence if “hate” was somehow involved in the crime”isn’t sufficient for them. They’re clamoring for the feds to take it to the hoop and also charge Roof with domestic terrorism.

They also whine louder than a nursery full of squalling newborns about how when a white person shoots up a bunch of people, the “media” depicts them as mentally ill lone wolves, whereas when a nonwhite person goes on a shooting spree, all nonwhite people are implicated and defamed and stereotyped.

That also must be why, whenever there’s an Islamist-inspired mass murder, most of the American media, as well as the president, urge us not to blame Islam as a whole.

By the way, what is the difference between a hate crime and a terrorist attack?

There’s no difference at all because both terms are essentially meaningless.

It’s bitterly ironic to hear any established government fanning fear of “terrorism,” because all political regimes retain power through systemic psychological terrorism and the threat of punishment. And they enjoy the fulsome semantic luxury of using the word “terrorist” to smear anyone who threatens their power.