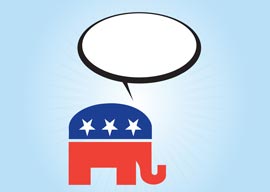 The word of the week is “cuckservative,” and boy, is it overdue. There’s been much tut-tutting about what a cuckservative is. Predictably the usual suspects in the inner and outer parties are calling it racist because they”re trying to consolidate their position. The Washington Post‘s disgraced journalist David Weigel, who has a history of mental illness and was fired from the paper after wishing death on conservatives in a private listserv, wrote up how awfully racist that terrible term is. Weigel has a difficult history with racism. A fellow participant in the JournoList with Weigel was Spencer Ackerman (now at The Guardian), who openly endorsed smearing conservatives as racist to protect the candidacy of Barack Obama. Weigel has never condemned Ackerman’s suggestion.

“Cuckservative” isn”t about race but about how much power you allow the word “racist” to have over you. It’s about the fake, phony conservatives who enjoy watching the real fighters on the right get sodomized while they gleefully gawk. They crave respectability over power and the limelight over influence. Seldom paid for their performances on Fox News or MSNBC, they repeat conventional wisdom after getting gussied up”but you can”t polish a soul.

I have been mocking the cucks for a very, very long time. Some cuckservatives have made if not a career then certainly a fetish of “policing” the right when they don”t trip over themselves to be on TV shows that no one watches. This is the respectable right that makes money from losing. Some of them have lost so often that they don”t even know what a winner looks like.

“This is the respectable right that makes money from losing. Some of them have lost so often that they don”t even know what a winner looks like.”

These cuckservatives resent it when you succeed and try to block you when you”ve defeated them by getting more attention. This is, ultimately, why they really hate Donald Trump: He has the audacity not to care about them! I know this feeling well because I somewhat pioneered it on the right. By breaking rules and by breaking news at my website GotNews.com, I built followers and supporters. I was so good at it that they had to kick me off Twitter. But who wants to buy Twitter stock these days?

Yet the cucks struck back. While Michelle Malkin routinely featured me and my work on Twitchy, when Twitchy got sold to cuckservative Salem Communications I was never mentioned again. When I wrote for the Daily Caller I got hundreds of Drudge links even though I wasn”t technically on staff. When I work for myself I get, maybe, two. Drudge, of course, has linked to other sites stealing my content because the cucks worried about how “problematic” I am. You”re not supposed to know that he has an arrangement with several big funders on the right. I”ve been asked by the Daily Caller’s editor in chief Tucker Carlson not to comment on the sniping from my ex-colleagues, but he’s done nothing when cuckservatives par excellence like Matt Lewis make things up about me in his publication. I even had to threaten a few cucks not to mess with me lest I expose their plagiarism. These silly fights are as pointless as they are hilarious. These losers like to status-signal how great they are, don”t they, Washington Free Beacon?

Cuckservatives who don’t enjoy seeing their country screwed are often too intellectually inbred to care. They don’t notice what’s really happening to their country because they, denizens of the Accela corridor, don’t really live in it. This is an old problem brought up by a young man. Thirty-year-old William F. Buckley, writing in the inaugural issue of National Review, put it thusly:

Radical conservatives in this country have an interesting time of it, for when they are not being suppressed or mutilated by the Liberals, they are being ignored or humiliated by a great many of those of the well-fed Right, whose ignorance and amorality have never been exaggerated for the same reason that one cannot exaggerate infinity.

Buckley never got to see how Twitter would amplify the ignorance and amorality of today’s cuckservatives. Whereas once Buckley’s publication stood against history yelling, “Stop!” today’s National Review serves as little more than a Jolly Roger crew”a yacht club for the rich to hobnob with their favorite writers for a tax deduction. The cruise ship’s younger writers subsist more or less by living with roommates well into their 30s, at which point they either get married or go to law school or write books that no one reads. National Review has no problem hiring plagiarists who get traffic but spend little time thinking about having material worth publishing.

I”ve had more than a few brushes with the cuckservatives of my day, from National Review‘s Jonah Goldberg to Commentary‘s John Podhoretz. Goldberg demanded that no one follow or link to me. Podhoretz called me a “disgusting monster“ and a “sick fuck” whom no one should give money to for pointing out that James Foley was a Muslim and hated America…hate facts that were later reported by The New York Times. I was kicked out of Grover Norquist’s meeting because I had once noted that scientific literature explains that there are differences between the racial and ethnic populations. Just like Charles Murray. Even though I had been invited.

I know so much about the cuckservatives because once upon a time I used to break bread with them, coveting”and winning”the awards that they bestowed upon their friends for thinking the right things at the right time. Fool that I am, I wanted prestige, but found little in the diminished paycheck. I was soon to learn that nearly every cuckservative supplements his or her income by having donor class friends buy dinner. In some cases they are quite literally on the payroll or live in the donor’s guesthouse or the Manhattan apartment while the master is away in Europe or in the Hamptons. In other cases the cuckservative will run around speaking to organizations favorable to the cuckservative’s favorite causes, which are, coincidentally, whatever the richest Americans favor. One of them I knew even tailored his column to whatever group was inviting him that week to speak. Not surprisingly the candidate many of those cuckservatives wanted in 2012 was Mitch Daniels, the former governor of Indiana who was quite literally a cuckold.