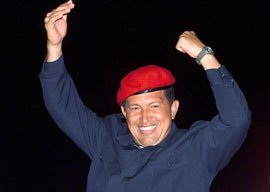 You will be missed, Hugo Chavez. The world has lost a man who was larger than life, and we don”t only mean your Body Mass Index. We will always love and admire you, even though you are now technically dead.

Because we absorb most of our political insight from people who”ve done nothing more in their lives than pretend to be somebody else while reciting lines that other people have written”we speak, but of course, of the noble and compassionate actors, actresses, and gender-neutral acting persons of Hollywood”we offer yet another warm and rosy encomium to your passing.

You are a hero for improving the lives of Venezuela’s poor. Even though most of your fawning admirers in America’s entertainment industry have never felt poverty and don”t know any poor people personally and are generally repulsed by them and in truth live far from the unwashed masses safely behind electric gates manned by armed security, pretending to relate to those far beneath them allows them to feel a little less guilty for being wealthy and privileged.

“The world has lost a man who was larger than life, and we don”t only mean your Body Mass Index.”

Even if debt has mushroomed under your reign and inflation is soaring and you”ve effectively sold off your country’s future to China”and even if this means that any uptick in the poor’s living standards is temporary”it’s the thought that counts, Hugo.

You bravely stood up to corporations and oligarchs, and since we”ve been trained Pavlovian-style to react with revulsion to buzzwords such as “corporations” and “oligarchs,” we thank you. Pay no mind to the fact that Hollywood is a clusterfuck of extremely well-heeled corporations run by oligarchs. And let us ignore the fact that you swept away one group of oligarchs only to replace them with a new breed of government-enabled oligarchs. These neo-oligarchs suck blood from the public treasury and according to various estimates have siphoned anywhere from 20 to 400 billion petrodollars and tucked them away in offshore banks where the humble slum-dwellers of Caracas won”t ever notice it’s missing. But since we are largely a creative rather than a pragmatic class, it’s symbolism rather than reality that is important to us.

It doesn”t matter that during your long and heroic life you made insinuations that there may be no life on Mars because of capitalism and that the USA caused the Haitian earthquake with a “tectonic weapon.” It isn”t important that we”d lambaste any non-leftist who uttered anything that was one-thousandth as stupid or insane. We can forgive such things because you are on the right side of history, a self-described “Trotskyist” who advocated “permanent revolution,” even though history has shown that socialism invariably leads to violent repression, mass murder, and even more egregiously intractable forms of the poverty it promises to cure. Because we emulate actors and actresses we must not deviate from the script, no matter how drastically it deviates from reality.