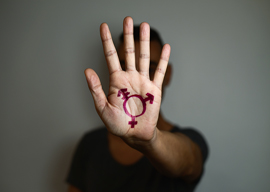 Trannies remind me of libertarians. To be more precise, the thing I find most objectionable about trannies is also the thing I find most objectionable about the hardcore, uncompromising “no government” anarcho-voluntaryist libertarian types. These “get rid of government” crusaders spend every moment of their lives hectoring nonbelievers like me, trying to make us acquiesce to their vision of a world without the state. What cheeses me off is, if you want to be free, if you want to live “off grid” without government, if you want to grow your own food and barter hens and nanny goats for potatoes and butter, go do it. What’s stopping you? It’s a big world and easy to get lost in. Sure, there’s never any guarantee that you’ll be safe from the long arm of the state—Randy Weaver found that out the hard way when he and his wife made the logical decision to drop out of society rather than try to change it to suit their beliefs—but still, living off grid (which I’ve done several times in my life) is way easier than getting 300 million people to agree in unison, “We’re going to dismantle government and live as medieval farmers and tradesmen.”

The anti-government ideologues act like they can’t go and “be free” until they’ve persuaded the rest of us to follow suit. Essentially, they’ve made their freedom quest dependent upon me coming along for the ride, even though it’s a trip they could easily take solo.

And that, right there, is why trannies annoy the hell out of me. A tranny is someone who claims, “I was ‘assigned’ the wrong gender at birth, and I need to be the real me.” Okay, fine. Go be whatever the hell you want to be! Go be a chick with a dick, or a man with a cooter. It’s absolutely none of my business how any adult decides to express him/her/itself sexually. But the thing is, these days trannies are not content to just go be trannies; they insist that we become accomplices to their fantasy. We have to pretend to see what they see. We have to use pronouns that we know are misapplied. We have to allow dudes with dirlywangers to shower, change, and go to the bathroom alongside our daughters. We have to foot the bill for sex change surgeries. To even suggest that sex change operations are elective and not a “medical necessity” is to challenge the tranny illusion. This is at the heart of the controversy surrounding President Trump’s announcement that trans folk will no longer be allowed to serve in the military. Trannies, their leftist allies, and “moderate Republicans” think soldiers are as entitled to state-funded sex change operations as they are to first aid on the battlefront.

In Sweden, the trans lobby has been able to bully the medical establishment into changing the official term for sex change (or sex reassignment) surgery. The new authorized term is “könskorrigering”—“gender correction.” A perfectly healthy organ (a penis) is now seen as a congenital defect to be surgically lopped off, no different from when doctors are forced to remove the left atrial appendage to save the life of someone with a congenital heart defect.

“Sorry, but you can’t make your mental health dependent on everyone else seeing you as you see yourself.”

Tranny-mania is an assault on language, common sense, and science. It’s also an assault on the very concept of aesthetics, and the right of every human being to have sexual preferences (an irony, considering that queer activism used to be all about championing the individual’s right to sexual preferences). Straight men are now told that it’s “transphobic” to prefer their women penis-free. The tranny argument is “If I think I’m a woman, you need to see me as one, even if I have a wiener.” Straight men are no longer allowed to find penises sexually unattractive, because trans activism is about changing human nature itself. It’s nothing more than the newest iteration of the New Soviet Man, that 20th-century fallacy in which communist ideologues claimed that with enough reeducation and coercion, mankind could overcome every natural instinct the state considered counterrevolutionary. Well, New Soviet Man is back, now wearing a skirt and fighting for trans acceptance rather than an end to self-interest and private property.

I have absolutely nothing against trannies. Honestly, there’s no “phobia” here. What I don’t like is the compulsion, the insistence that I play along. With the gay marriage issue, wherever you stand on it, the fact is it really doesn’t affect non-gays. Oh sure, Christian conservatives and “traditionalists” will make the “slippery slope” argument (“If you allow gays to wed, it might not impact your life immediately, but over time it will erode the moral fabric of our nation and one day a satanist cannibal will eat your sister”), and there have indeed been individual cases of compulsion involving wedding cakes, but still, it’s just a fact: Two men in Miami tying the knot has absolutely zero bearing on my life or yours. What’s odious about the tranny agenda is that it’s all about affecting non-trannies—you, me, your neighbor, your child, your unborn child, hell, even your pets. The tranny agenda is nothing but intrusiveness.

Why do trans folk so obsessively insist that the rest of us have to feed their fantasy? Recently, the LGBT community successfully lobbied the American Psychiatric Association into changing how it refers to trans folk in its Diagnostic and Statistical Manual of Mental Disorders. Previously, trannies were said to have gender identity disorder. In 2012, “disorder” was dropped in favor of “dysphoria.” This is not a small difference. Gender identity disorder made clear that trans people have a condition. Gender dysphoria (GD) merely indicates that they suffer discontent. The change was primarily made in order to separate trannies from people with body dysmorphic disorder (BDD). People with BDD see themselves as fat even though they’re skinny, or they see their face as hideous when in fact it’s fine. They may see a particular limb, like an arm or a hand, as disfigured or “alien,” and they’ll either hide the limb or try to remove it.

Regarding the latter, medical science considers it unethical to assist in the removal of a healthy limb or organ if the patient has BDD. By removing the “disorder” from transgenderism, by defining it by the symptom (dysphoria) rather than the cause (a disorder), the APA has essentially decided to normalize a mental illness via creative wordplay (people with BDD experience dysphoria as well, but that doesn’t change the fact that they also have a disorder). In attempting to explain the difference between body dysmorphia and gender dysphoria, trans activist Austen Hartke states, “Body dysmorphia causes someone to believe their body is a certain way, while gender dysphoria is a sense that the body should be a different way.” But that’s simply not true. People with BDD also believe that their body should be a different way (skinnier, for example, or minus an offending hand or arm). At the core, people with BDD and GD are in the same boat: They view themselves in a way the rest of us don’t (a skinny person saying, “I’m so fat,” a man saying, “I’m a woman”).

To be clear, if BDD and GD are both disorders (an opinion still held by many experts in the fields of science and pediatrics), BDD is much more severe than GD. Starving yourself to death because you think you’re too fat is much worse than wanting to live like a member of the opposite sex. But having the freedom to live like the opposite sex is never enough; trannies continue to suffer from dysphoria because, subconsciously, they know they aren’t the thing they’re trying to be, and they know that the rest of us see that. Hypnotherapy is often used to treat people with body dysmorphic disorder. And whether they admit it or not, people with gender dysphoria are essentially forcing us to use hypnotherapy on them. We, the non-trannies, are expected to reinforce their false reality by soothing them with a steady stream of positive reinforcement. We’re expected to shower them with false pronouns, undress next to them and pretend that we don’t see genitalia that obviously belongs in the other locker room, and rewrite science books because the old ones hurt their feelings. Trannies want to turn the entire world into one huge hypnotherapy session for their benefit, a world in which we’re reluctantly cast as the therapists.