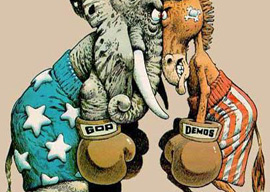 Jim Goad, in his comments about the “Fear of an Erudite White,” says just about everything I could have said about Jared Taylor and his new book, which I”m still reading with increasing admiration for its author. I agree that one can”t praise Jared sufficiently for his Southern courtliness, verbal brilliance, and willingness to speak bitter truth to moral cowards. I”m astonished that the present age could produce people of his qualities, who sound dramatically different from the usual leftist fellow travelers pretending to be conservatives. Having just read George Will, who upon turning seventy tells us how privileged he has been to leave behind the 1950s”which were full of “thoughtless cruelty” against minorities and before the feminist movement’s “justified” triumph”I have no idea of what now separates right and left in the media, except for purely arbitrary labels.

It seems to me that liberal journalists assign the term “conservative” to those of their dinner companions who can generate a “debate” without causing serious ideological division. The faux dissenters may even get to appear on TV, where they can talk up the last Republican president and rant against the “socialist” Obama. No sensitive conservative is supposed to feel anything but contempt for anything about America before the cultural left took it over in the 1960s. The figures and developments that aided the left’s ascendancy, as witnessed by the cult of MLK and the feminist movement, are now claimed by the right, as the right has now redefined itself to conform to the left. Autre temps, autres moeurs!

“I have no idea of what now separates right and left in the media, except for purely arbitrary labels.”

One can now be a “conservative” in good standing by opposing all government spending that occurred the millisecond “W.” left the White House. “Conservatives” are expected to approve of all governmentally enforced social changes that were introduced between 1960 and 2008. After all, these changes are now part of “conservative” history. Formerly leftist achievements should now be celebrated for embodying “values” or “permanent things.” We should also try to bring these achievements to other countries, even if it requires blowing up their populations. Do Arabs need gay rights? Yes they do, notes Jonah Goldberg, who wants to bestow on them what he considers to be a “conservative” achievement.

Like Taki and others on this website, Jared Taylor provides a counter-narrative that one isn”t likely to encounter on Fox News, in The Wall Street Journal, or in The Weekly Standard. It is a counter-narrative for which we would land up in jail as abettors of hate if we expressed the offending views too loudly in Europe, at least outside the former Soviet bloc. In Jared’s prohibited account of reality we are shown how the white Euro-American population ritually flagellate themselves for having improperly hued ancestors. Governments, educators, and even entertainers teach the white Christian majority to despise their collective past as irreparably tainted by prejudice and fascism. Whites are also supposed to welcome with open arms large-scale immigration from other parts of the world in order to “enrich” their supposedly loathsome ancestral culture.

In the US, race has surged up as the major taboo, and whites happily accuse each other of “racism” against blacks and dark-skinned Hispanics unless there is evidence of the most abject deference toward minorities. These minorities are in no way expected to return this deference”or even to be polite. In fact, as Jared amply demonstrates, blacks receive rewards from prominent whites for venting their hatred against the dominant race in the most obscene language. And nothing is apparently ever the fault of Third World immigrants or native minorities, which have been declared to be victimized and therefore exempt from normal social etiquette. High-profile blacks and Hispanics, Jared reminds us, make out extremely well by flailing away at whitey.