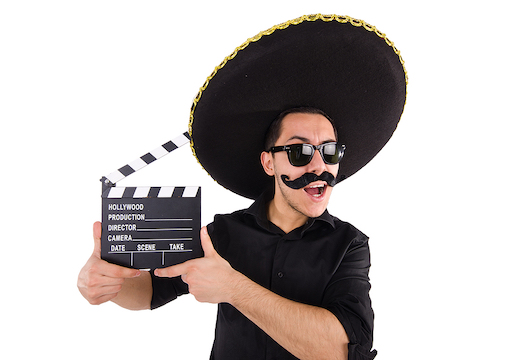 There’s an old saying I just coined: “You can ignore the race war, but the race war won’t ignore you.” No matter how insulated you think you are, the people in this country who are dead-set on making everything about race will eventually reach your doorstep.

Hollywood, that most leftist of leftist towns where every white wears a BLM pin and conservative thought has long been banished, just learned the hard way that the race war awards no points for wokeness. Whites gotta go. And that includes woke whites. Because race wars aren’t about ideology but, well, race (as should be obvious from the name).

“Actors, writers and producers warn of ‘reverse racism’ in the film industry which has created a ‘toxic’ climate for anyone who is a white, middle-age man.” So said the headline in last week’s Daily Mail (because no local paper would dare touch the story). Yep—it’s official: If yer white, get outta site! (I also would’ve accepted “If yer white, yer presence is a blight” and “If yer white, to yer career say g’night”).

A revolution is under way. White actors are being fired. Edicts from studio bosses make it clear that only minorities—racial and sexual—can be given jobs. A new wave of what has been termed by some as anti-white prejudice is causing writers, directors and producers to fear they will never work again. One described the current atmosphere as “more toxic than Chernobyl,” with leading actors afraid to speak out amid concern they will be labeled racist. Dozens of producers, writers and actors have spoken to ‘The Mail’ on Sunday about the wave of “reverse racism” pulsing through the industry.

I know one of those people, and I can confirm that the paper is accurately reporting this story.

For whites, “their careers are pretty much over,” said one of the execs. Adding insult to injury, certain skilled whites are being asked to continue working behind the scenes as advisers—unpaid and uncredited—so that all those new nonwhite hires can appear more capable than they actually are.

The antiwhite blacklist is being carried out in the name of the “BIPOC” coalition: “Black, Indigenous, and People of Color.” As The New York Times explained last month, the term “BIPOC” is used primarily to pacify blacks, many of whom dislike the more generalized “people of color” label, because they feel it doesn’t give blacks an “individual identity” separate from Latinos, Injuns, and Asians. BIPOC makes clear that this is a coalition of BLACKS (first) and POCs (second).

There’s simmering rivalry in the acronym. Remember that; it’ll prove relevant. But first, the tale of the cancellation that wasn’t.

“Hispanics give Hollywood an easy out. Producers can cast women who are essentially white while still adhering to their pledge to only hire from the BIPOC pool.”

Lesly Kahn is one of the most influential and respected acting coaches in the business. She draws a lot of water in this town, and she never gives impractical advice. In leaked 2018 audio from one of Kahn’s classes, the esteemed teacher told a Jewish actress who had ambiguously “ethnic” features that she should pretend to be Latina for the sake of getting work. Kahn told the young student to change her name to “Rosa Ramirez” and go all ¡ay Chihuahua! at auditions:

The Latin could actually get you interviews for representation. Just the fact that your name is Rosa Ramirez is gonna get you a meeting…. So you might try it…. Go to the headshot shop and tell them you’re Latin. Wear something fucking red. Wear some fucking sparkly earrings. Just fucking come up with the most Latin name you can come up with…. Aren’t we allowed to change our names to whatever we want to change our names to? Make sure before you change it to Rosa Ramirez that there isn’t already a Rosa Ramirez in SAG, and if there is, we try a slightly different name.

So Kahn’s advice is time-tested…and very, very “problematic” in today’s climate. Yet if you haven’t heard about this controversy, there’s a reason. Although it made the trade papers for a few days, Kahn quickly “settled” with BIPOC groups by pledging to fund a special “Latino scholarship” for actors who meet the “one drop” rule, and the matter was quickly forgotten. Kahn is still one of the industry’s most successful and respected coaches, and no one, anywhere, utters as much as one word about the “racist” scandal she escaped unscathed.

Odd, isn’t it? People have been canceled over so much less. Why’d Kahn get let off the hook? The reason our benevolent BIPOC overlords let this one go is that they were petrified the publicity might popularize Kahn’s strategy. Better to reach a quick settlement and hush the whole thing up. It takes a lot to get BIPOCs to forgo vengeance. Most of them attack whites specifically for the joy that cancellation brings. But in Kahn’s case, the race warriors wanted those headlines gone.

Because her “fake Latina” scheme is like the deadly toxin from Three the Hard Way—a targeted danger to the “B” in BIPOC.

Black Americans are in a bind. Their suicidal support of open borders has made Hispanics the superpowerful Democrat voting bloc of the future. It’s no coincidence that the same Hispanics who’ve taken so many black jobs demand to be part of any black scheme to take jobs from whites. And blacks are in no position to say no to such a powerful demographic.

The problem is, “Hispanic” can be many things, including white. When blacks are forced to do the “BIPOC” dance, they’re entering into a coalition with people who can be and often are as white as, say, Cameron Diaz, Lynda Carter, and Raquel Welch. In other words, Hispanics can represent exactly that “Western standard of beauty” that blacks so despise and that the foreign filmgoer market craves. Hollywood bosses might be willing to bend to black extortion when it comes to firing whites from behind-the-scenes positions; they might be cool with only hiring directors who look like Jordan Peele. But they see genuine dollar losses when faced with the prospect of not hiring attractive white actresses.

Hispanics give Hollywood an easy out. Producers can cast women who are essentially white while still adhering to their pledge to only hire from the BIPOC pool. This is not a new problem; previous black attempts to team up with Hispanics in the fight to racially remake Hollywood have turned sour fast. Back in 2000, when a BIPOC coalition formed with the goal of strong-arming the TV networks into hiring more actors of color, the NAACP double-crossed its Hispanic partners behind their backs to forge a separate deal with the networks that favored only blacks, much to the chagrin of the “browns.”

In 2004, Angharad Valdivia, a professor of gender, media, and Latino studies at the University of Illinois, outlined the controversy in a paper titled “Latinas as Radical Hybrid”:

Latina actresses can play a broad range of characters, including black, white, and everything in between, thus providing casting directors with an easy way to foreground the few famous Latinas out there who by virtue of ambiguity can slip into these roles. This presents both an employment opportunity as well as the possibility of seeing more people of color on the screen and in print. However the second effect is that hybrid Latinas and ethnic ambiguity also provide mainstream culture with a chance to displace and replace blackness. Blackness once more gets pushed to the margin.

So this is an old issue, and one that frightens blacks worse than an open-water relay. Like most of current-day black America’s preoccupations, the goal isn’t just to be pro-black but antiwhite. Hispanics are “backdoor whites,” but there’s no way that blacks can keep them off the BIPOC team. In 2000 they could, but not now; not with twenty years of demographic change and pro-Hispanic Democrat pandering. In 2000, blacks could sell out their “partners.” Today? Blacks couldn’t win that fight.

So, blacks are nervous. As it is, enough black Americans have been in prison to know that Mexicans and whites have a habit of forming alliances if forced. Alienating Hispanics is bad strategy for blacks, especially as the politicians they robotically keep voting for continue to bring millions of them in.

The very last thing that blacks want “amplified” is that there are influential people like Lesly Kahn encouraging a deliberate blurring of the lines between “white Hispanic” and “white white.” Which is exactly why I’m recommending that very strategy to white actors. It’s a great way to keep working: Just change your name from Henderson to Hernandez, and talk about your dear old abuela from Jalisco. But even better, it’s a way to fuck with BLM, which is always its own reward. The goal would be to build up enough paranoia in blacks (who skew paranoid anyway) that they’d begin to view with suspicion every new “Hispanic” actresses allowed in by the BIPOC mafia. Make blacks demand that Hispanics “prove” their ethnicity. That’ll lead to discord and fracturing and maybe sink this coalition like the last one.

Still, manufacturing “crypto-Caucasians” is only a short-term solution. Long-term, white low-budget (non-Hollywood) filmmakers must realize two things: First, the blacklist is going to dump a shitload of white talent in their lap, skilled professionals shut out of the big leagues. And second, white beauty sells. It’s a commodity, and a sought-after one that’s often exploited by other racial and ethnic groups (and I say that as a member of one of those groups). Pretty girls are the great equalizer. Low-budget films can’t compete with the blockbusters in terms of special effects, car chases, interplanetary battles, or epic historical re-creations. But they can compete on absolutely equal ground when it comes to attractive actresses. I come from the world of low-budget film production, and that’s a basic fact. Pretty girls sell tickets better than car chases do.

In a previous column, I mocked entertainment-industry conservatives for their fetish of trying to create a “new Hollywood.” That’s a pipe dream and it always will be. But lots of individual filmmakers will learn to make some fine lemonade from the blacklist’s bitter fruit. Young men scrolling through Netflix on a Friday night are gonna get damn tired of movies starring women who look like Leslie Jones. Filmmakers who are willing to use white actresses as leads will be able to drain viewers from the BLM-approved mainstream crap.

If moviemakers who work outside the system play it smart, they can steal some valuable market share, as Hollywood gradually becomes yet another piece of pricey real estate burned to cinders by the irrational, pernicious, hate-filled extremists of BLM.