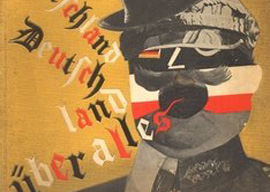 Back in the 1940s the Luftwaffe and Wehrmacht had to bomb and invade countries to prove das Herrenvolk’s superiority over Europe’s lesser peoples. Now, thanks to those lesser nations’ poor housekeeping and the German economy’s turbo-charging through the euro’s export opportunities, Germans merely have to sit back and refuse to buy up sovereign debt to see the rest of Europe fall at their feet.

The eurozone’s countries have no option but to knuckle under and “act German” by making the kind of “neither guns nor butter” cuts required to survive in anything approaching their present economic level.

The only alternative is the euro’s collapse, and nobody (important) wants that, as demonstrated by the quickness with which the Greek elite abandoned plans for a referendum and the Italians agreed to a non-democratic administration of “technocrats” (code for Italians who behave like Germans).

On Sunday, in an achievement that even eluded Hitler during an earlier period of German ascendancy, the Spanish fell in line and voted in a cost-cutting center-right government.

“Apart from a few squeaks of protest, most of the continent seems cowed and ready to lick the German jackboot.”

Soon, unquestioned German power—with the help of the Vichy French under the compliant Sarkozy—will stretch from the Straits of Gibraltar to Stettin on the Baltic, with German voters’ reluctance to bail out the rest of Europe trumping the Greek, Italian, Spanish, Irish, and other Untermenschen’s aspirations to have cozy public-sector jobs, plump early retirement, and plenty of sweet welfare.

But as in that earlier period of Teutonic ascendancy, only one brave island nation and its lion-hearted leader, David William Donald Cameron, stand in the way of Europe sliding into a dark age of ever greater German fiscal domination and undemocratic political union.

Realizing that Britain is economically too weak to stand in the German juggernaut’s way, Cameron has sent out the signal to Europe’s “resistance movements” (mainly stroppy Greek rioters and tax-dodgers) to rise up and demand that the Frankfurt-based European Central Bank buy up European sovereign debt so that the political largesse and good times can keep on rolling—effectively advocating a policy he refuses to implement at home. Unfortunately, apart from a few squeaks of protest, most of the continent seems cowed and ready to lick the German jackboot.