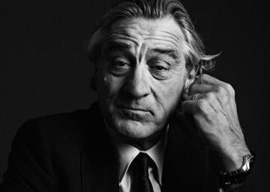 What’s the female equivalent of “I”ll never get an erection again”?

That happened to me when I found out actor Alan Rickman”upon whose lap I’d often fantasized sitting while he read aloud from the Manhattan telephone directory”was directing a hagiographic play about “activist” dingbat Rachel Corrie (AKA “St. Pancake.”)

No doubt millions of other women had that same unwelcome physical reaction right after some blousy star-bonker announced this week that Robert De Niro kept on his socks during sex.

While he was never on my “f***-it list””that Bananarama song left me profoundly unmoved”any residual feelings other females had for De Niro during his pre-funny grandpa era were likely erased by that hideous “Bobby socks” image.

If you’re me, though, the ultimate De Niro deal-breaker is the news that he’s producing a TV series about Boston neo-Nazis.

“There are more “Nazis” on your average Hogan’s Heroes rerun than currently reside in all of North America. (And even they were played by Jews.)”

Memo to Robert De Niro: American History X was not a documentary, just an ABC Afterschool Special with swear words.

There are more “Nazis” on your average Hogan’s Heroes rerun than currently reside in all of North America. (And even they were played by Jews.)

I know, because the ever-looming yet never quite materializing “neo-Nazi” takeover of Canada was supposedly the reason we needed our since-abolished (I helped!) “hate speech” law, Section 13.

One often hears that “if Such-and-Such didn’t exist, So-and-So would have to invent them.” Seemingly unaware that this expression is a wry observation about universal human stupidity, not a suggestion, our “Official Jews” reportedly invented “the Canadian Nazi Party” in the 1960s just so they’d have someone to “fight.”

Look, I know Boston went through the whole “busing” thing”about which the “bad” i.e., “conservative” white guys were, as usual, absolutely right.

And yeah, I realize that Boston Herald American photo of the white guy spearing the black guy with an American flag has been reprinted in millions of textbooks.

But I also know the less-famous “punch line” to that Pulitzer Prize-winning image of Beantown at its supposed worst:

…the man who was being attacked was named Ted Landsmark….He is presently the president and CEO of the Boston Architectural Center….The man in the photo wielding the flag was Joseph Rakes, who when last heard from was a laborer on the Big Dig in Boston. Ted Landsmark is writing opinion pieces for the Globe about the nature of the art and landscaping that will go on top of the tunnel.