Robots of the World, Unite! 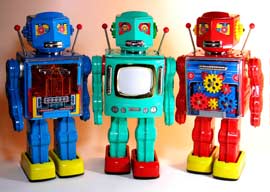 Antonio Garcia Martinez says he has seen the future, and it made him flee for the woods. Whereas he had previously toiled as a strategist for Goldman Sachs, an advisor for Twitter, and a product manager for Facebook, now he hides among the tall timber somewhere north of Seattle with a gun and a bucket toilet. Martinez claims that his stints in the tech industry led him to believe that the robots are coming, and they will spare few in their path:

Within 30 years, half of humanity won’t have a job. It could get ugly. There could be a revolution. I’ve seen what the world will look like in five to 10 years. You may not believe it but it’s coming, and it’s coming in the form of a self-driving truck that’s going to run you over. There are 300 million guns in this country, one for every man, woman and child, and they’re mostly in the hands of those who are getting economically displaced. There could be a revolt. You don’t realize it but we’re in a race between technology and politics, and technologists are winning. They’re way ahead.

“The most terrifying future dystopia may not involve a surfeit of workers and a scarcity of goods. The problem may lie in billions of humans who serve no useful purpose.”

While this may sound like the delusional frothing of a Luddite crank, many others in high places share Martinez’s fears. Artificial-intelligence guru Jeremy Howard says that if anything, people need to be more worried about robots displacing, dislocating, and forever setting adrift large segments of the work force. He dismisses the eternal optimists’ stubborn notion that while technology may temporarily replace old jobs, it always creates a sufficient number of new ones:

People aren’t scared enough. They’re saying, ‘Don’t worry about it, there will always be more jobs’…And it’s founded on this purely historical thing of there has been a revolution before, it was called the Industrial Revolution, and after it there were still enough jobs, therefore this new, totally different, totally unrelated revolution will also have enough jobs….It’s a ludicrously short-sighted, meaningless argument which incredibly smart people are making.

Howard predicts that a “tiny class of society” will seize control of all wealth and will grow to despise the vast swaths of an obsolete working class who’ve been replaced by technology and will thus be essentially “worthless” leeches in the new all-tech economy.

The unfortunate and seemingly inexorable fact is that technological advances will make most workers too physically weak and mentally sluggish to compete with robots. Whereas the old socialist worldview was that a tiny and lazy elite sponged off the proletariat’s invaluable labor, this new world will be characterized by billions of unskilled layabouts hoping for pity and begging for handouts from a tiny, productive elite. Ironically, technology may pave the way for a reverse scenario where the only people being exploited are an ultra-wealthy and super-intelligent elite—AKA, those who are already being accused of unfairly possessing “cognitive privilege.”

Despite Donald Trump’s campaign focus on jobs lost due to outsourcing, a recent study at Ball State University found that of the 5.6 million manufacturing jobs lost in America between 2000 and 2010, 85% were due to automation.

A 2013 study by a pair of Oxford economists predicted that automation may gobble up a full 45% of all US jobs over the next two decades. Entire professions once thought of as the exclusive domain of the working class—such as commercial driving, retail work, and restaurant gigs—may soon be transferred wholesale to machines. Even much of white-collar “mental work” such as legal research, translation, data analysis, and journalism may soon be stripped raw from humans and given to their unfeeling artificial-intelligence successors. Earlier this year, the White House issued a report claiming that 83% of jobs paying less than $20 per hour will soon succumb to automation.

The national US unemployment rate for July was 4.3%, a somewhat underwhelming number when you ponder that nearly 100 million Americans of working age are no longer even considered part of the work force. That means 37.2% of the eligible workforce “is not working or even looking.”

Still, the paid quislings at the Washington Post attempt to assure us that even though “the robots will steal our jobs,” that’s “fine,” because there will always be newer and cleaner jobs where those came from.