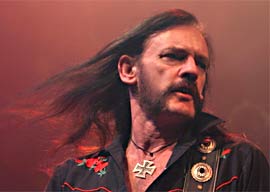 If the death of Lemmy Kilmister from iconic heavy metal band MotÃ¶rhead teaches us anything, it’s that society currently considers it far more respectable to be a drug addict than a Nazi.

The term “motorhead” is British slang for what in America would be known as a “tweaker” or a “meth addict” or a “speed freak.” Basically, Lemmy named his band “Speed Freak.” And probably to the degree that Lou Reed made heroin “cool” for generations of gullible kids who were hungry to transgress, Lemmy made crystal meth seem acceptably fun rather than something that causes heart failure and brain damage and turns pretty girls into hags. But meth is also something that kept Hitler’s heart beating and Nazi soldiers marching. It is the whitest of all drugs, and therefore I suppose the most “Nazi.”

Not that Lemmy self-identified as a Nazi”he merely had a lifelong affinity for wearing iron crosses publicly and collecting Nazi memorabilia privately. Sometimes it wasn’t even all that private”I remember living in LA in the late 1980s and reading about Lemmy causing a ruckus by flying a German flag outside his West Hollywood apartment. Lemmy also collected Confederate artifacts and relics of the Napoleonic era. When queried about his habit, Lemmy told a reporter:

Since the beginning of time, the bad guys always had the best uniforms. Napoleon, the Confederates, the Nazis. They all had killer uniforms. I mean, the uniform of the SS was great. They were the rock stars of the time.

Is it a mere accident that the bad guys always look better? Would the swastika and Rebel flag seem so visually compelling if they weren’t so forbidden? It seems almost objectively clear that from a graphic-design standpoint, the swastika looks better than the hammer and sickle, and the Rebel flag “pops” far better than the Stars and Stripes do. But would these symbols seem nearly so striking if not for the taint of evil that modern society projects onto them?

“Is it a mere accident that the bad guys always look better?”

Around second grade, I was summoned into the principal’s office at my Catholic school for drawing a German tank in my notebook. The reason I’d drawn the tank was that me and all the other boys in class watched Rat Patrol on TV and thought Rommel’s boys looked cooler than the Americans. But even then, being a “Nazi sympathizer” was not considered nearly as bad as being a communist. Even the suspicion of being a traitorous Red could wreck one’s social standing and career as quickly as the “racist” smear gets the job done these days.

In the years since, history has been rewritten so that the enemy has always been the Nazis rather than the communists. The history books have been altered so that we’ve always been at war with Eurasia rather than Eastasia. This has resulted in Stalinist forms of retouching and revisionism where iconic punk rocker Sid Vicious’s swastika becomes a hammer and sickle in the cinematic homage to that nonfunctioning, girlfriend-killing smack fiend. It’s a magical new world where hard-rocking glam geniuses The Sweet have had their androgynous bass player’s Hitler mustache and swastika armband doctored out of existence.

These days punk rock is almost entirely a tool of extreme leftist propagandists, while rappers are ironically in love with shameless capitalism as exemplified by Donald Trump. Heavy metal isn’t entirely in the thrall of leftist dogma like punk is, but it’s still subject to relentless calls to “diversify” its ranks. The simple economic truth is that you aren’t likely to get a record contract if you run around Sieg Heiling and flashing swastikas, even if no one has a problem with you singing about eating skulls and sacrificing virgins. Praising genuine current threats such as ISIS and Kim Jong-un won’t earn you nearly the same scorn that will befall you should you dare to make a non-condemnatory comment about a German dictator who’s been dead for seven decades.

This is supremely ironic to me, because both punk and metal sound entirely fascistic”they both bear the ruthlessly violent hum of Panzer tanks crushing everything in their path. Punk rock in particular started out sociopathic but was quickly refashioned into something socialistic.

The blind leftist sheep who still find meaning in punk rock 40 years after the fact can forgive Sid Vicious of his swastika and Lemmy of his Nazi memorabilia, yet a hard-stomping early British punk band such as Skrewdriver is effectively erased from the history books because singer Ian Stuart eventually reformed the band as a white-power unit. I can only speculate, but to me it seems that Sid Vicious and Lemmy get a pass because they were substance-addled jesters and therefore not taken as any sort of legitimate threat to the ruling order. In other words, it’s considered far more moral to do heroin, kill your girlfriend, and wear a swastika than it is to merely wear a swastika.