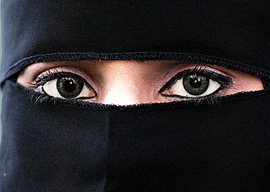 OK. Things are heating up in the old continent after a boiling summer. October will be the cruelest month, as the poet didn’t exactly say, but it might also be crunch time. Europeans seem more sophisticated than the parochial, law-abiding, taxpaying suckers in the good old US of A, but they’re no better than the pompous, self-proclaimed elite within the Beltway. Multiculturalism (human rights for those who don’t respect others’ human rights), high taxation, and open borders are what the bureaucrooks in Brussels are all about. So what is there to say about the old continent, except that it’s a rotten ship ready to sink unless Carla Bruni-Sarkozy has triplets? (It will ensure Nicolas Sarkozy’s reelection next year). Talk about a gang that can’t shoot straight.

Earlier this year, a failed asylum-seeker in England who claimed to be a lesbian won an injunction against deportation. A Ugandan illegal, she said she would face persecution in her homeland for seeking sexual solace with women. A judge, however, ruled that she wasn’t a lesbian after all and was to be removed from the green and pleasant (just joking) land of England. But the decision was overturned by a higher court that ruled she still “could be suspected of being Sapphic,” a word that the Ugandan did not comprehend. She remains in Britain on benefits, as does a man from Togo who has committed numerous crimes against women and children but claims that in Togo he’s a no-no, hence a possible victim.

“I don’t understand why European governments and courts continue to indulge this scum.”

How do you run a country when well-known criminals with records claim persecution back home and are allowed to stay in Europe thanks to the EU Human Rights Act’s unelected judges? When I was busted at Heathrow Airport 27 years ago for carrying two grams of cocaine in my pocket, I was warned I could be deported after serving my four-month sentence in one of Britain’s toughest prisons. The Home Secretary at the time waived the rule because of my previous exemplary conduct—not even the proverbial parking ticket in either continent—so I was allowed to stay and did not need to appeal. The great Maggie Thatcher told me years later that although she was appalled to hear that I might be deported, she had done nothing about it. Rules were rules. But that was then, this is now.

Which brings me to Kelly Brook, a model whose figure—to borrow Raymond Chandler’s words—a bishop would smash in a priceless church stained-glass window to peek at. Kelly is a naughty girl, and why not? A large poster of the Playboy model posing as a large-breasted angel was recently defaced by two young men because she pouted provocatively while thrusting her heaving chest in their direction. The poster was on the side of a London bus shelter. That is when Mohammed Hasnath and Muhammed Tahir went to work. They painted a burqa over her, telling the fuzz who arrested them that it was a sin for a woman to be uncovered in public. They paid a small fine and were set free. Muslims regularly deface posters in Europe with impunity on decency grounds. Hasnath said to the hacks covering the case that if non-Muslims were to look at their women in a lascivious manner, blood would be spilled. That, of course, does not stop the myriad Saudi and Kuwaiti kleptocrats who have overrun Britain to ogle white women and send their pimps over to try and pick them up. What is good for Mohammed Bouf Kaka does not apply to John Q. Smith.