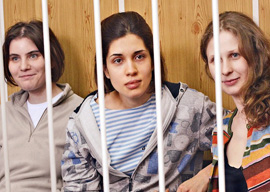 Western analysis of the stunt pulled in Moscow by the cretins known as Pussy Riot cannot convey the visceral rage their act has elicited from the typical Russian.

I don’t mean the typical Russian of central Moscow or St. Petersburg, but those from the endless cinderblock apartments that ring each city and fill in the rest of the largest geographic country on Earth. They are not commonly interviewed on television, and Western media hardly ever quote them. However, they do most of the nation’s working and slaving and living and dying. They also do the believing.

There are many things one does not do in a Russian Orthodox church. In many colder climes”basically all of Russia much of the year”adherents do not remove coats. Congregants remain standing throughout the ceremony. You cannot put your hands in your pockets and if you do, someone will tap you and wag his finger.

The clergy will not look at you. Their backs are to parishioners because Orthodox services honor the Almighty instead of trying to entertain those who pass through the archway. The service is not about you and it will proceed whether you are there or not.

This is a video of the “protest” by Pathetic Riot (sic) before an Orthodox ceremony, a rite still taken seriously in Russian culture. Note the horrified look on the peasant women’s faces. That is the expression of true belief being defiled.

Attendance was sparse at the cathedral that day, but many Russians apparently would have felt no qualms about kicking in every last one of these girls’ teeth. This is the degree to which their stunt offends typical Russians. Few would object to the same reaction at a neo-Nazi rally at Auschwitz, a pro-Khmer Rouge carnival at a Cambodian temple, or those insufferable jackasses who denounce homosexuality at soldiers’ funerals. Some people beg to have hell beaten out of them. That they generally don’t is a true crime against humanity.

Infiltrators and just plain traitors had framed the prosecution as a trial of “democracy” and “free speech.” This, like most of what newsreaders gurgle, is as much manure as the bile from these pretentious wretches’ throats. In Russia both government generally and Putin individually are criticized freely and frequently.

While there are instances of journalists disappearing or suffering untimely deaths (though by no means all or even most attributable to government), the exact same happens in the West and America in particular. The only difference is that Americans never hear about them. The West’s few enterprising journalists suffer “suicides,” with the only notes left behind addressed to their families.

Lamentably, there was no end to the insufferable idiots spouting off about this lack of Russian liberty.

One of them was Madonna, taking reprieve from showing the ravages of time to tell the world we must respect freedom. Not freedom of religion or freedom of association evidently, but freedom to spit on others’ most sacred beliefs in a place specifically designed for them to retreat from a world which already does that with glee at every opportunity imaginable.