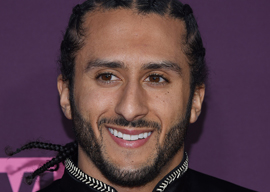 The inspirational story of a backup NFL quarterback suddenly dominating headlines by championing black-power politics sounds like a dream you’d dream if you fell asleep during a Warren Beatty marathon on TCM (specifically a section that ran Heaven Can Wait before Bulworth).

Nike’s announcement that they had re-signed Colin Kaepernick and plans to use him in campaigns, beginning with the commercial that aired during the inaugural Falcons–Eagles football game last Thursday, was the news of the day last week. To use a pretentious phrase that’s become trendy: There’s a lot to unpack here.

In the summer of 2016, Colin Kaepernick started wearing “cops are pigs” socks and chose not to partake in the national anthem, at the behest of his then-new girlfriend Nessa Diab, an MTV and radio host who was raised Muslim in California by her Egyptian parents. Diab not only suggested his protests but the next year, through her posts on social media, cost the quarterback a backup job with the Baltimore Ravens. She might be another example of what Steve Sailer referred to when he spoke of our society’s increasing “Rule by Actresses.” Sadly, though, this was not the first time Kaepernick had gotten in trouble through a woman: Two years prior he was not charged when a quasi-girlfriend claimed she may have been sexually assaulted by him. Those are potential charges that, in the era of #MeToo, and when the Tampa Bay Buccaneers have suspended their starting quarterback three games for allegedly groping his Uber driver, Kaepernick should be thankful took place in humanity’s Sexual Dark Ages—the year 2014.

Kaepernick would actually play football in 2016, after his protests started, putting up an impressive 16–4 touchdown-to-interception ratio but pairing it with a ghastly 1–10 record as a starter (something his supporters are embarrassed to bring up). Had he not protested, he probably would’ve landed a job somewhere else, definitely as a backup but possibly as only the third-stringer on a roster. His decline in the NFL had as much to do with the decline of the style of offense he ran, the read option, as it did with anything else. As Sports Illustrated put it:

“Do you think Nike or Kaepernick notices the irony in how similar to Trump they sound?”

Meanwhile, in a similar way, Kaepernick’s 2012 and ’13 stardom for the 49ers hid his need for similar incremental progress. During the Jim Harbaugh era in San Francisco, Kaepernick was surrounded by a running back, offensive line and defense that were among the NFL’s best, insulating him from the sorts of third-and-long situations and big deficits that once felled Tebow’s Broncos.

What those on the outside saw: Kaepernick took Alex Smith’s job in mid-2012, posted a 98.3 passer rating, had a transcendent playoff game against the Packers (263 yards passing, 181 rushing), and got the Niners to within a few yards of a championship. He followed that with another solid season.

What those on the inside knew: Kaepernick had a long way to go, since the coaches built complexity into the option run game rather than building it into the passing game. That led to big plays on the ground, with defenses trying to catch up to coordinator Greg Roman’s run concepts, and more manageable situational football. And when defenses became more adept at stopping the option, Kaepernick’s fortunes shifted.

Another problem: Kaepernick was playing for a contender, and the best way for the Niners to keep winning was to continue using him the way they had. By 2014 the team was 8–8, and Harbaugh was on his way out. And as the option began to yield fewer 70-yard runs and more seven-yarders across the league, teams relied on it less and less. That, in turn, meant fewer suitors for quarterbacks who once majored in it.

So Kaepernick’s decision to protest, and probably get kicked out of the NFL for good, rather than live on another few seasons as a washed-up backup, was the choice that he’d rather burn out than fade away. A parallel, perhaps, with Serena Williams choosing to get repeatedly penalized rather than lose without controversy to 19-year-old Naomi Osaka last weekend. In pro wrestling terms: Neither of these older athletes wanted to lose the belt clean.

To pivot back to the Nike commercial: This is not the first time Nike has televised The Revolution. While Kaepernick is the face they chose to celebrate thirty years of their “Just Do It” campaign, 1988 was also, controversially, the year Nike used the Beatles’ “Revolution” in an ad to sell sneakers. Nike’s “Just Do It” advertising slogan was always believed to have been inspired by the ’60s radical Jerry Rubin and his own catchphrase “Do It!” Rubin was, ironically, a close friend of John Lennon and once wrote from his prison cell in 1970, “Being a celebrity is a powerful weapon. People listen to you and tell other people about you. You are myth. You are media.” Rubin brought Lennon into revolutionary politics, and in Peter Doggett’s There’s a Riot Going On, the scene on the night Nixon was reelected is worth quoting:

They had broken off the sessions to watch the election results, and Lennon had attempted to drown his sorrow in tequila. A few months earlier, he had begun to suspect that Jerry Rubin was a CIA agent, who had shopped him to the US government as a radical threat, and provoked the immigration battle that was now the backdrop of his daily life. Rubin’s friends had convinced him that the Yippie founder was on the level. But it was Rubin who had sucked the Lennons into the revolutionary fray, who had convinced them that they only had to enter the struggle to tip the balance in the direction of righteousness. Now here they were, the hucksters who had seduced Lennon—Rubin, Abbie Hoffman, Allen Ginsberg—sprawled helplessly on the floor, weeping for their lost dreams.

Lennon was more angry than sad. He felt as if he’d been duped. He crashed through the door, bottle in hand, bellowing “Up the revolution” as a sarcastic commentary on his comrades’ failure. When he spied Rubin and Hoffman, he launched into a tirade about “pigs” and “middle-class Jews,” those charlatans who had sapped his energy and tipped him into a desperate struggle with the American government.

That the yippie Rubin became a yuppie stockbroker in the ’80s is all too perfect. His “Just Do It” radicalism, celebrity worship, and cynical transition to Wall Street paper-chasing all foreshadowed Nike tapping Kaepernick to be the face of their campaign in 2018. (You’ll notice “Just Do It” is not far from John Lennon’s own favorite motto from the ’60s, “Do What You Want,” which was occultist Aleister Crowley’s “Do What Thou Wilt.” Before you snicker at that connection, remember it was also Rubin, Hoffman, and Ginsberg who tried to levitate the Pentagon 51 years ago.)

And so Nike makes their commercial, featuring Trump-like declarations in self-belief, about how you too can be a winner. Can be great. Can be the best. That you shouldn’t settle for wearing a famous athlete’s jersey: You should settle for him wanting to wear yours. Do you think Nike or Kaepernick notices the irony in how similar to Trump they sound? That even in defying Trump they are still promoting American-style New Thought attitudes about thinking, willing, and believing yourself to greatness? How perfect is it that the magical “Do What Thou Wilt” (Crowley) and the corporate “Just Do It” (Nike) had their bridge in the hippie phony “Do It!” (Rubin).

For the left, all that matters is that in Colin Kaepernick they’ve found their new Muhammad Ali (who once said to George Foreman, ‘‘I’m going to beat your Christian ass, you white flag-waving bitch, you”), in the same way they believed they had in Obama their new Martin Luther King. Because, for the left, it’s all about, and forever about, re-creating The Sixties. To understand the profoundly nostalgic love leftists feel toward that decade, we must quote Ryan Gosling speaking to Rachel McAdams in The Notebook: “It wasn’t over, it still isn’t over.”