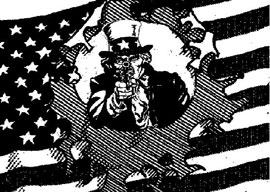 During these holidays we should take a second and send our best wishes to the neocons, poor dears, who are having a bad time during this holy season because their plans have gone awry”for at least the next six months.

Ten years ago they were sitting pretty. Saddam had fallen, his chemical and nuclear weapons were about to be discovered, and a new, improved Middle East loomed on the horizon. Well, we all know what a con that was”one that not only cost thousands of American lives, hundreds of thousands of Iraqi ones, and millions of refugees, but also one that turned Uncle Sam from a rich “have” into a heavily indebted “have-not” looking at a Chinese laundryman friend for a loan.

The neocons got away with it. They kept their jobs and the roles they play in the media as American patriots, and now they want to repeat the exercise. They”ve only changed one letter, from q to n, from Iraq to Iran. And”amazingly”they have gone one better: This time they want Uncle Sam to be on the side of the bad guys and rain bombs on the good ones. Have they gone completely bonkers, or has someone been putting LSD in the DC water supply?

“The Christian faith is under attack by the very people who are painted in the West as freedom fighters.”

The greatest bribers and influence-peddlers in DC are the Israeli and Saudi lobbies. Overthrowing Assad has been a Saudi/Sunni master plan since donkey’s years, and I”m surprised the wily Israelis have gone along with it”if they have, that is. For the Saudis, the Iranian nuclear program and the Syrian war are parts of a single conflict. (That’s where the Israel/Saudi alliance comes in.) The militant jihadists fighting the secular Assad forces are financed by Saudi Arabia and Qatar, the money controlled by gangs who call themselves royals and who have stolen their countries” oil and mineral wealth from their people to finance their hookers and palaces where they can drink their whiskey in peace. Al-Qaeda, that nice group who gave us 9/11, is the main beneficiary. Its aim is to get rid of Christianity in the Holy Land.

Which brings me to the new persecution”that of Christians.

In Baghdad, Sunni terrorists have bombed dozens of Christian churches; an estimated million Christians have fled Iraq. A huge quotient of Syria’s Christian population has fled their villages and towns for Assad-controlled areas. In Egypt, where Copts have lived since Christ’s time, millions have been intimidated or murdered during the brief time the Muslim Brotherhood held sway. They are now treated as third-class citizens and confined to squalid quarters. Priests are regularly murdered and churches are routinely bombed. Saudi Arabia, of course, does not tolerate Christianity or any other religion for that matter, but Saudi interests are given priority in the West because money talks and Saudi money talks louder than most.

So the Christian faith is under attack by the very people who are painted in the West as freedom fighters, financed by the Saudi-Qatari gang that hopes to establish a Sunni zone across Syria and Iraq and bottle up the snake, as the so-called Saudi King called Iran.

Which brings me back to the neocons.