Save the Pandas—Kill the White People! 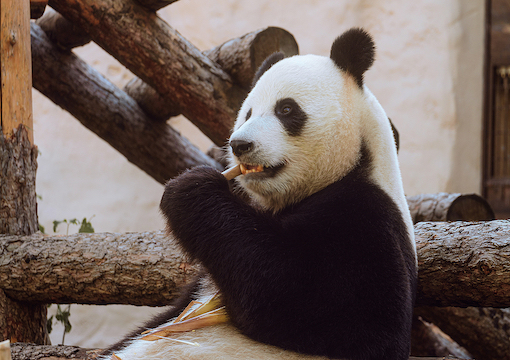 Just like pandas, white people are fast becoming an endangered species out there in their traditional areas of natural habitat, and for the same basic reason, too—namely, a strange reluctance to keep producing enough new bear cubs. The main difference is that, in order to combat this sad population decline, the People’s Republic of China isn’t currently blindly importing millions upon millions of potentially hostile black and brown bears from abroad in order to usurp the panda’s traditional place in the domestic food chain, unlike the ruling politburos of the U.S. and Europe.

The “Great Replacement Theory” holds that the native white panda (or possibly polar bear) populations of North America and Europe are being subjected to a “genocide by substitution” facilitated by programs of uncontrolled black and Muslim mass immigration that have been proceeding with ever-increasing speed over recent decades, at the alleged hands of such nefarious globalist elites as the IMF, E.U., U.N., and the wholly fictional Elders of Zion. But is this actually true, or just an alarmist conspiracy theory, as most mainstream naysayers maintain?

The French Resistance
The idea has most purchase in its main native birthplace of France where, in a November 2022 interview, perpetually depressed French novelist Michel Houellebecq told fellow Gallic thinker Michel Onfray that “The Great Replacement, I was shocked it is called a theory. It is not a theory, it is a fact.” “This is objectively what the numbers say,” Onfray agreed. And, objectively, this really is what they say, too. Come the end of this century, just about everywhere outside Russia and Eastern Europe, white-majority homelands will be Gone With the Wind.

“Come the end of this century, just about everywhere outside Russia and Eastern Europe, white-majority homelands will be Gone With the Wind.”

Houellebecq said the unspoken (at least in public) “wish of the native [white] French population” was not “that the Muslims assimilate, but that they stop robbing them and attacking them. Or else, another solution, that they leave.” And, if they don’t leave, then a mass foreign bear-hunt may ensue: “People are arming themselves. They are getting guns, taking classes at shooting ranges…. When entire territories are under Islamic control, I think that acts of resistance will take place. There will be attacks and shootings in mosques, in cafés frequented by Muslims, in short, Bataclan in reverse.”

As if on cue, on 23 December one particular alienated Elmer Fudd, named by London’s Times as 69-year-old white Frenchman William Malet, went on just such a reverse-Bataclan hunting spree in Paris’ Kurdish quarter, killing three completely innocent people. Most subsequent media coverage focused upon the alleged shooter’s self-admitted “pathological hatred” of foreigners, but spent rather less time explaining how this had allegedly originated.

In 2016, three young men of “North African heritage” (media-speak for “Muslim criminals”) had broken into his home. He had confronted them with a kitchen knife—rather than simply bending over and eagerly asking if they’d like to rape him, too, as contemporary polite liberal etiquette now recommends—then was sentenced to twelve months in prison for his unacceptable show of resistance. Worse, two of the injured burglars later sued him for €30,000 in damages, thereby literally making victims out of criminals and criminals out of victims.

Therefore, Houllebecq was proved correct: If, as here, Muslims don’t “stop robbing them,” then eventually their white French victims really will snap and perpetrate “attacks and shootings” in Muslim areas, as forecast. Houellebecq’s own reward for unwisely resisting was to be swiftly threatened with being sued by the Grand Mosque of Paris for supposedly inciting hatred with his grim words. The Mosque has since dropped its complaint, but only after Houellebecq met with its chief rector and modified his remarks to be more to the imam’s liking, as a good little subaltern native always should.

Numbers Don’t Lie—but Politicians Do
Data shows the Great Replacement really is occurring—that’s why saying so obviously now needs to be threatened with legal censorship—but the main factors behind it are probably not some implausible, planet-spanning, deliberate Jewish-globalist plot, as a hard-core minority of actual conspiracists maintain, but impersonal socioeconomic forces such as panda-like low white birth rates and the resultant Western demand for cheap, replacement immigrant labor from abroad. Those businesses and think tanks that consequently petition governments to liberalize immigration inflows may well be short-sighted, greedy, or exploitative, caring more for profit margins than for the future social cohesion of their homelands, but they are not actively trying to destroy the white West…just doing so accidentally.

Consider a recent tweet exchange, occurring in the wake of new U.K. census data being released by the Office for National Statistics (ONS) in late November 2022, in which sphere-headed ex–Cabinet Minister Sajid Javid responded to a post from chief Brexiteer Nigel Farage observing that several English cities were now “minority white[-British]” with the supremely unconcerned two-word shrug “So what?”

So what? How about what just happened in Paris, maybe? Or all the recent interethnic riots between Pakistani Muslims like Javid and Indian Hindus like his boss Rishi Sunak in the U.K.’s first-ever Great Replacement white-minority city, Leicester? That’s “so what,” Mr. Malteser-Head.

Panda-ing to the Mob
With such supremely blasé attitudes, our ruling class only fuels belief in parasitic conspiracy theories ever further. A classic example occurred in June 2020, when environmental “save the pandas” charity World Wildlife Fund UK (WWF) released a short video, narrated by celebrated conservationist Sir David Attenborough, arguing human population growth was endangering the planet and its creatures. A brief clip of thousands of brown-skinned Indians bathing in a river was accompanied by Attenborough warning of the pressing need to “stabilize the human population as low as we fairly can.” Hours after sharing the film, the WWF then deleted it, cringingly tweeting thus:

Earlier today we shared a video that could appear to support a narrative that people of color are responsible for the pressures of a growing world population. This is not our intent at all. We have deleted the video and apologize—we will do better.

How impeccably woke of them. Even the panda on their Twitter logo is now a fashionably gay, rainbow-colored specimen: Explains why they are really going extinct. Online leftists, however, chose hysterically to misinterpret the WWF video as indicating a sinister wish to cause a different form of planetary life to die out, too: black and brown people, like all those lovely Indians cavorting in their blessed river. Self-righteous tweets soon began breeding faster than the Ganges-bathers themselves. Complaints about the “inherent racism of overpopulation narratives” vied with alarmist assertions that the idea the teeming masses of Africa and Asia could ever become subject to any kind of number-limiting demographic “control” from above was “terrifying, frankly.”

Accordingly, reedited versions of the WWF’s clip soon reappeared online, but with one very significant editorial change: The only footage now allowed to illustrate the booming global population was of white people. And this, despite the fact that, of all major races on Earth, whites currently have amongst the lowest birth rates.

It is not merely “a narrative” that non-whites are responsible for “the pressures of a growing world population,” as the WWF’s mea culpa pleaded, but an undeniable demographic datum. Population Institute Canada (PIC), of whom Attenborough is also a patron, complained the WWF’s completely accurate message had simply been labeled an inconvenient “hate fact” by the online mob.

PIC explained that “Western Europe’s [population] growth-rate is near zero, while Canada, the US and Australia are growing only through immigration, mostly of people of non-European origin. In contrast, sub-Saharan Africa is growing at 3% annually, which means a population doubling time of about 23 years, and Africa is on track to add one billion people a few decades hence.” Unsurprisingly, it turns out “Nature doesn’t care about a ‘Social Justice’ agenda,” unlike woke mobs on Twitter, and that black Africans still produce pollutants, just like white Europeans.

What appears to be the implicit message in editing out images of all non-whites in a population-control video and replacing them with whites? Simply that “whites should be made to die out and be replaced.” This obviously is not what the WWF actually believes, but you can see how certain people might conclude otherwise. And what heinous acts might such a conclusion then one day lead such individuals to perform? I think we’ve just seen a sneak preview of that over in Paris.

A best-selling 2003 British humor book about grammar took as its title a zoology text’s comically mistaken assertion that, due to an unfortunate error in comma placement, today’s typical bamboo-chomping panda Eats, Shoots & Leaves. A bit like today’s equally endangered white Frenchman in a Kurdish café, then.