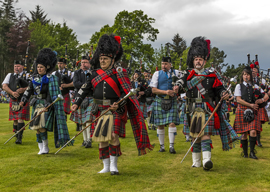 “See, if you was Billy Connolly sitting right there,” said the Winston Churchill doppelganger beside me in a Glasgow pub, “Ah”d fuckin” stab ye.” I was with my uncle and this was his closest friend of at least 30 years, so I knew him well.

“Aye,” he replied, “Ah”d sink the knife right there.” Then he poked his finger right below my rib cage. I asked him why, and he said it was because of all the swearing Connolly put in his act. “He didnae have tae go blue fer fuck’s sakes,” he lamented.

Of course, if I were Billy Connolly, this Glaswegian would be buying me so many pints, we”d have to slide over a new table to carry them all. The entire bar would be hollering with joy and begging for photographs. I”d probably get raped.

They don”t hate Billy because he swears. They all swear. They hate him because he left their underdog, working-class town and moved to Hollywood.

This is the Scottish mentality in a nutshell. It is fierce nationalism mixed with an obsession with the underdog that borders on psychosis. In the same pub, years later, another one of my uncle’s friends learned my wife was Indian after asking why her eyes “were so Chinky.” He started to cry when she told him and kissed her hand as though she were the pope. “See what happened to youse people?” he asked rhetorically through tear-soaked rosacea, “It’s a fuckin” tragedy, so it is.” Scots aren”t rational human beings. They”re drunk. They don”t want to separate because it’s a smart economic decision. They want to separate because they fucking hate England. They don”t hate England because of history. They hate them for the same reason they hate America. They hate the winners. This has made them profoundly socialist and if they leave England, they will become a cold, wet, Cuba at best”McIslamabad at worst.

“This is the Scottish mentality in a nutshell. It is fierce nationalism mixed with an obsession with the underdog that borders on psychosis.”

My parents are from Glasgow and I spent summers there my whole youth. We still go back a lot and nothing’s changed. They are all still one misunderstanding away from a fight (if someone offers you a Glasgow kiss or a Glasgow smile, run). This is why bartenders will say, “Here you, watch it” if a patron so much as raises his voice. She knows she has to keep the pit bulls on a short leash or the entire venue will be flattened. God knows what they”d get up to without restraint. Cormac McCarthy’s The Road comes to mind.

Don”t get me wrong. I love Glaswegians. Every single one of them is funny. From the bus driver to the police to the NED who wants to rob you, everyone has a fantastic quip that cuts to the core. They make the funniest shows on television and if anyone could understand them, they”d move Hollywood to Scotland. Greats like Rab C. Nesbitt, Still Game, and Limmy’s Show are uncensored satires that take the cultural quirks of the Scots and polish them into comedy grenades. Being hilarious is what they do best. Creating jobs and building an economy? Not so much.

It wasn”t always this way. They “invented the modern world.” They pioneered the separation of church and state. Glasgow used to be the manufacturing hub of the West. Before “Made in Taiwan” there was “Made in Glasgow” and that ocean-accessible town handled just about everything. They didn”t just distill our whiskey. They built our ships, fabricated our fabrics, and processed our tobacco. It seems like every time I check a plaque in a park in Glasgow, I learn it used to be the front lawn of some industrial baron from 200 years ago. The industrial revolution itself was facilitated by a Scot, and this massive surge of factory work brought in gigantic beasts of men from the Highlands who worked ungodly hours in the factories and made England look like Scotland’s baby brother.

The 18th and 19th centuries were good to Scotland. Slowly, however, industrialization seeped out of factory towns such as Glasgow and Paisley, as it did for the rest of the Western world. By the time the baby boomers were born, there was just shipbuilding and whiskey. When India held up a sign that said “Will build ships for food,” the nation was left with just whiskey. That’s the last thing an unemployed Scot needs. Today, the shipbuilding beasts of yesteryear are on the dole, drunk in pubs singing what Scotland considers to be its “national” anthem:

O flower of Scotland
When will we see your like again?
That fought and died for
Your wee bit hill and glen
And stood against him
Proud Edward’s army
And sent him homeward
Tae think again.

Edward the Second was sent homeward in 1314’s Battle of Bannockburn, but England is back in Scotland now. This time, they”re not here to rip out Braveheart’s entrails but to put them back. They”ve provided the province with a pretend parliament where Scots can (sort of) determine their own destiny. They also painted Scottish figures on the English pound and told them they had their own currency (comedian Stewart Lee has a great bit about a Scot checking the market every day, stunned to discover the Scottish pound is yet again exactly on par with the English pound). They bailed out the Bank of Scotland and moved Lloyds” head office and other financial institutions into Edinburgh, which helps bring tourists since the junkies were scaring them away (a move they promise to rescind if Scotland separates). How about a thank you?