‘Serotonin’: A Love Letter to Protectionism 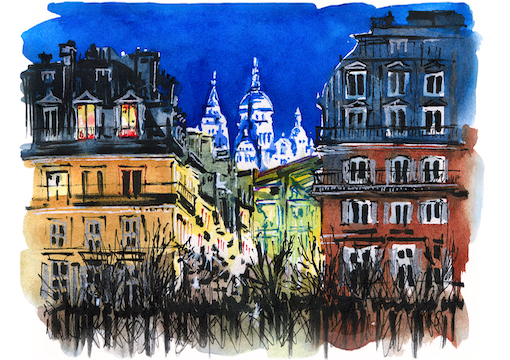 French reactionary writer Michel Houellebecq became world-famous on Jan. 7, 2015, when a caricature of him appeared on the cover of Charlie Hebdo to promote his new novel Submission about the future Islamification of France just as Muslim terrorists slaughtered the magazine’s staff.

That attack marked the opening of the two-year stretch in which the end of history ended: Merkel’s Mistake, Brexit, and Trump.

Submission, in which a Houellebecqian antihero adapts to the new order in Europe by converting to Islam and taking three brides, turned out to be terrific, perhaps the most memorable novel of the now-ending decade, which will likely go down in history as the era when much of the top talent moved to the right (or, alternatively, most of the mediocrities moved to the left).

Not surprisingly, Houellebecq (pronounced simply WELL-beck) can’t top Submission in his new book Serotonin, a more conventional literary novel about a depressive middle-aged bachelor’s nostalgic reverie over the women who once loved him.

Serotonin’s narrator, Florent-Claude Labrouste, is another Houellebecqian protagonist drifting between mordant contempt, comic ineffectualness, anhedonia, and an Aspergery compulsion to list the name of every chain store at which he shops. Houellebecq, who worked as a computer administrator after studying agronomy in college, has helped introduce the nerdish tone of science fiction to prestige literature, as if Nabokov’s Humbert Humbert had been your tech support guy.

This time Houellebecq’s protagonist is a well-paid 46-year-old consultant for the French Ministry of Agriculture. Unusually within Houellebecq’s oeuvre, he is quite handsome and once, despite his anonymous career, drew beautiful women easily. (In real life, the dilapidated author looks like Iggy Pop’s homelier brother.)

“In Serotonin, old-fashioned trade protectionism serves as a metaphor for life and love, while the ideology of free trade represents depression and death.”

At the beginning of Serotonin, the narrator quits his job, and moves out from the stylish apartment he shares with his cheating Japanese girlfriend (Houellebecq recently married a Japanese woman whom I hope can take a joke). He flees to the last hotel in Paris that allows smoking. (Houellebecq’s fundamental complaint is basically: What’s the world coming to when a Frenchman can’t smoke in a Parisian hotel?)

There, nothing much happens other than he reminisces over old girlfriends and, in a characteristically French touch, stops showering. When the stench gets too bad, he breaks down and obtains a prescription for a (fictional) state-of-the-art antidepressant. It relieves his aversion to bathing, but:

The most undesirable side effects frequently observed in the use of Captorix were nausea, loss of libido, and impotence.

I have never suffered from nausea.

So, nothing much happens either when he meets up with a now-alcoholic old girlfriend, a Hitchcock blonde who’d once been an actress in avant-garde plays she had loathed:

Her beauty, blonde, elegant and cold, seemed to predispose her toward texts read out in a blank voice in a subsidized theater…. She would never have suspected, she told me, that such crap existed, it was baffling she said for them to offer such nonsense up to the public.

Fortunately, two of Florent’s other girlfriends were more adorable. It’s surprising how much romantic power Houellebecq can suddenly generate in his prose. Houellebecq is a patriotic French writer and is proud that romance is France’s greatest gift to human culture.

The narrator wonders if seventeen years ago he should have asked his 19-year-old true love to give up her veterinary studies in Paris to move to Normandy to be his wife.

But I didn’t, and I probably couldn’t have done;… I was a modern man, and for me, like for all of my contemporaries, a woman’s professional career was something that had to be respected above all else….

Exactly why Houellebecq has become ensconced in the pantheon of literature can be unclear. Reading him in translation, he seems more of a deft stylist than a masterful one. Serotonin is a fine book, but its lack of the science-fiction framework of Submission makes it less of a must-read.

Houellebecq is more of a novelist of ideas, a little like Vonnegut, another depressive semi-sci-fi author. What’s striking about Houellebecq is that so many of his ideas seem rather obvious in 2019, but hadn’t been expressed much at all in literary circles over the previous quarter of a century.

Some of Houellebecq’s distinctiveness stems from his having missed out on the academic-cultural gravy train that employs many other successful fiction writers. He had to get a real job fixing computers.

Keep in mind, however, that he hated having a real job. Serotonin is in part a fictionalization of a career path Houellebecq might have wound up on as an agribusiness executive if he’d been handsomer and thus more appealing in job interviews. His narrator writes of college:

I had felt nothing but revulsion for business and all that it involves…. I didn’t give a damn about my career—I don’t think I thought about it for more than thirty seconds, it seemed so unlikely that anyone could seriously be interested in anything but girls—and the worst thing is that now, at forty-six, I realize that I was right at the time: girls are whores if you want to see them that way, but a career is a more considerable whore and one that doesn’t give you any pleasure.

One unusual thing at the time that Houellebecq did was opposing free market capitalism from the right. (In recent books, Houellebecq treats the left as washed-up and intellectually irrelevant.) To Houellebecq, deregulating the marketplace, whether economic or sexual, was not going to be as conducive to human happiness as its optimistic Anglo-American theorists promised.

In Serotonin, old-fashioned trade protectionism serves as a metaphor for life and love, while the ideology of free trade represents depression and death. The purpose of property, whether private or national, is to shelter you from relentless competition.

His protagonist’s job at the Ministry of Agriculture is to write position papers for trade negotiators who are supposed to represent the interests of French farmers. The farmers always, though, seem to lose in the end. France, it is assumed, simply has too many farmers.

When I subscribed to The Economist in the 1980s, the editors complained endlessly about the European Community’s Common Agricultural Policy, which lavished subsidies upon small farmers by fixing prices high for consumers. The Economist whined about the “mountain of butter” that Europe’s huge number of coddled dairy farmers produced.

Back then, the French state was adamant about keeping its country folk happy. Just because foreigners could make butter cheaper, the postwar French government reasoned, didn’t mean that French dairymen shouldn’t carry on their time-honored trade in their picturesque countryside. Ever since Napoleon ratified that the peasantry could keep the lands expropriated during the French Revolution, to be a French peasant had been to be privileged among the world’s many farmers.

But over the decades since, even the French couldn’t stand up to the seductions of globalization. When a Normandy dairy farmer asks the narrator, “And do you think there will never be protectionist measures?”

“Absolutely impossible,” I cut in without hesitation. “The ideological pressure is too great.”… I had been confronted with people who were ready to die for free trade.

In the most exciting chapter of Serotonin, the dairy farmers block the highways and fight the police in a premonition of the Yellow Vests movement that began in rural France between the time Houellebecq submitted his manuscript and its publication.

So, while Houellebecq isn’t at his Submission-level peak in Serotonin, he remains the fiction writer most attuned to our age.