Seven Ideas You Can Never Discuss on Television 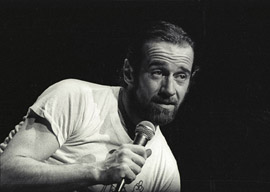 In 1972 comedian George Carlin famously delineated the “Seven Words You Can Never Say on Television.” All seven words dealt with bodily parts or functions at a time when such things were simply not mentioned in polite company. If anything, Carlin was understating the case”back then, I don”t remember anyone on TV even suggesting that nipples existed, much less coming out and saying “tits.”

In the intervening decades, society has not only shed such taboos, it has actively embraced vulgarity. At least on cable TV, one is now allowed”in some cases encouraged”to not only say all seven of those words, but to use them in a single sentence while demonstrating them for the camera. These days we have reality shows about crippled midget meth-smoking stripper Satanist hermaphrodites with AIDS competing against similarly afflicted freaks for cash prizes, and it’s “all good””even something worth celebrating.

Modern culture has disabused itself of the false notion that the human body and its various functions are unnatural or unspeakable. It has rid itself of most sexual hang-ups, but”since all societies define themselves primarily via taboos”in its stead it has erected a new and equally fraudulent idealized vision of humanity entirely unsupported by science, logic, or evidence. There’s a whole new set of dirty words that didn”t used to be dirty”all of them derogatory terms for people who aren”t white males”and a forbidden set of ideas which one must not permit to seep inside one’s head without risking censure, shunning, verbal abuse, career death, and possible assault.

The new sacred cows come in new shapes and colors, but they”re still sacred and they”re still fat fucking cows. The taboos have switched from the sexual to the cultural, but shiver me timbers if they aren”t enforced with the same blind, vengeful, true-believer tenacity as the old taboos. Ironically, these taboos find their deepest roots among a presumably “edgy” demographic”but the detached, ironic smarm so endemic along the Left Bank is only a thin crust atop a molten core of inviolably sacred assumptions and risk-free sanctimony. There is a new prudery afoot, and it’s based entirely on a faulty, illogical, and unsustainable myth of universal human equality.

What follows are not seven dirty words, but seven dirty ideas one cannot espouse or even ponder on television without being kicked in the face by a velvet-covered steel-toed boot. Although others treat these ideas as if they were radioactive, carcinogenic, and poisonous, none of them seems remotely radical or extreme or offensive or controversial to me. Instead, they all seem supremely reasonable. But in a world where what’s deemed “politically incorrect” is so often factually correct, these seven big fat elephants are stinking up the whole room.

1. ALL MEN ARE NOT CREATED EQUAL.
Equality is a concept which nearly everyone believes but no one has bothered to prove.”¨ The unassailable notion of blank-slate cognitive and physical equality, despite all contrary evidence, is the fat stump rooted deep in the soil from which all the other modern taboo branches sprout. The sweetest fairy tale ever told is the one where God made everyone equal.”¨ It’s such a wholesomely peaceful notion, people will rip your head off your neck if you don”t submit completely to it. But if no two blades of grass are alike, how can any two humans be alike? If anyone thinks all men are created equal, they”ve obviously never been in a locker room or attended an interracial calculus class. All things being equal, there is no such thing as equality.

2. AT BEST, HUMANS SHARE AN EQUAL POTENTIAL TO BE ASSHOLES.
The main problem with “humanism” is that it fails to account for human nature. I look at the world and see a rainbow of people who all suck in different ways. I”ve met noble souls of all colors and screaming assholes of every hue. All tribes, nations, and individuals across this great planet share an equal ability to annoy and disappoint. Every culture, subculture, and counterculture is blindly self-justifying, and, when it achieves sufficient strength, it becomes rapaciously predatory. The best possible world religion, the only one with an outside chance of ensuring global harmony, would consist of a basic agreement that we can all be assholes.