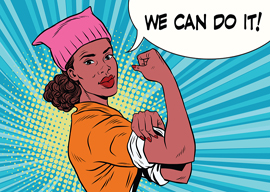 For centuries writers have depicted the weaker sex’s knack for using gossip and manipulation to pursue their ends. Research on women’s in-group relations confirms this natural tendency, in which there was probably once immense evolutionary value. Such covert aggression may be understood as the functional equivalent of man’s more common and overt physical aggression, which, being the stronger sex, he is better able to engage in.

Of course, while their own flaws are fair game, men in our politically correct time are not supposed to talk about this sort of thing, nor anything else that, though strictly empirical and value-neutral in itself, will nonetheless be perceived as “sexist.” Meanwhile, women themselves know the truth of this manipulative tendency only too well: It is the reason so many prefer “male friends.”

Nor is this handy wicked tool so hard to perceive, provided we are willing. Thus, Christine Blasey Ford—a professor of that frequently sophistical, hysterical, anti-male, and accordingly female-dominated discipline called psychology—has alleged that 36 years ago, when they were both teenagers, Judge Brett Kavanaugh tried to rape her at a party. Where and when exactly? Ford doesn’t remember.

It was during a couple’s therapy session in 2012 that she suddenly recalled the horrible incident, although the notes from the session contain no mention of Kavanaugh, who says he’s innocent. To be sure, therapy in general is no science, but a means by which you can find anything at all. It is an endlessly freewheeling medium for exploring—and creating—your “issues.” So long as you can afford $300 or more an hour, you get the support of “a caring expert,” who will be glad to lend the appearance of something legitimate, or at least important, to whatever you happen to discover in your mysterious psyche. Were you ever raped? Abused? Neglected? Did daddy like big sister more than you? Was your passive-aggressive mother secretly jealous of your nice figure? Well, maybe! But do go on at any rate, because what matters is how you feel!

“It’s important for women to not follow feminists in equating expressed male sexual interest itself with moral evil.”

Ford’s allegation is highly dubious. It reeks, moreover, of characteristically female manipulation. Back in early July—just after Kavanaugh became known as one of the nominees to replace the retiring Justice Anthony Kennedy—Ford made the allegation anonymously to The Washington Post via a tip line. Ford wouldn’t go on the record, however, so the paper responsibly chose not to do a story on the subject. Then in late July Ford wrote her congresswoman, Democrat Anna Eshoo, who passed the letter on to Sen. Dianne Feinstein, the ranking Democrat on the Judiciary Committee.

Thus Feinstein had been aware of Ford’s allegation long before coming out with it. Like the vindictive wife who will never let her weary husband forget how terribly he erred in the distant past, Feinstein cunningly waited to pull this dirty trick she had up her sleeve. Coming out with it now is a calculated, last-minute attempt to stop Kavanaugh’s confirmation to the Supreme Court.

As if this story were a send-up of progressive stereotypes, one of Ford’s attorneys, Debra Katz, is a woman who looks like she just came from teaching Gender Trouble at Bryn Mawr College. A fund-raiser for Hillary Clinton’s presidential campaign, Katz has ties to George Soros and is a big donor to left-wing causes. “These people are all miscreants,” she has said of the president’s advisers. “The term ‘basket of deplorables’ is far too generous a description” for them. Finally, although she is “DC’s Leading #MeToo Lawyer,” Katz has a long record of dismissing accusations of sexual harassment against Democrat politicians, including those against Al Franken and the Creep-in-Chief himself, Bill Clinton.

The Senate Judiciary Committee has invited Ford and Kavanaugh to testify on Monday. Ever unsatisfied, Ford believes that doing so would be “contrary to the Committee discovering the truth.” You see, she wants more witnesses to be involved (or rather, perhaps, people to be paid off). But the only witness she named, Mark Judge, claims the alleged rape never happened.

In what may be the most egregious temper tantrum to date in these Mean Girls politics, Ford attempted to leverage her status as a “sexual survivor” to get the FBI to do a seventh—yes, a seventh—investigation of Kavanaugh as a condition for providing testimony. “No!” the insensitive FBI answered, sending the pouting professor back to her bedroom to knit a quilt: “It’s not faaaiiir! What about the stuff the Deep State had arranged to be uncovered?”

For the serious psychologist—that is, not you academics, but a person who always thinks for himself and never conforms to any group—Ford is a most recognizable type of American woman. Having never learned to respect male authority, she has no respect for authority and social order at all. Rule your wife, said Delphic maxim No. 95. Like Eastern sages, the great Greek tragedians intuited the perennial antagonism between male structure and female chaos. First principle, O Deplorables, for any healthy and lasting culture: If men do not rule the house, in time women psychologically dominate the culture, and that means dysfunction throughout. So Nature Herself has made things, and hence the deep, dark gender lesson of our time.

The Twitter rabble and the establishment media, each addicted to blind virulence, have been busy attacking the alleged witness Mark Judge because, among other sins, he has written intelligently about the inherent ambiguity of seduction:

Of course, a man must be able to read a woman’s signals, and it’s a good thing that feminism is teaching young men that no means no and yes means yes. But there’s also that ambiguous middle ground, where the woman seems interested and indicates, whether verbally or not, that the man needs to prove himself to her. And if that man is any kind of man, he’ll allow himself to feel the awesome power, the wonderful beauty, of uncontrollable male passion.

This proves, we’re supposed to believe, that Judge is a bad character, and so by association is his friend Brett Kavanaugh. In reality, such interpretations evidence nothing but sheer bias and fear of the dark truth about sex, which is far too complicated for the zealots of our progressively idiotic time.

Clearly Judge, a pious Catholic, does not want men to drag women by their hair back to the He-Man cave. He believes “a man must be able to read a woman’s signals,” and “that no means no and yes means yes.” Where Judge is apt to be misunderstood is his acute awareness of “the ambiguous middle ground” and bold affirmation of traditional masculinity.

As with the other mammals, it’s typically men who pursue women. It’s woman, after all, who has supreme biological and hence greater sexual market value. Sexual desire is expressed in inherently murky, messy psychological and emotional terrain, men and women alike sometimes changing at imperceptible speed. Can the dizzy, ardent lover keep up? Ah, what an onerous business it is, though so pleasant! Nobody ever knows what will come next! Myself, I schedule regular quarrels for the workweek, getting them out of the way in order to save the weekend for what a great poet called “the lineaments of Gratified Desire.”

Sometimes a woman feels undecided about a man. She does not know whether she’s “into” him or not until he “makes a move” or “goes for it.” (“The girls,” you see, are not always available for immediate group consultation.) Notice the active verbs and the gender roles here: It’s the man who asserts himself, trying, as it were, “to prove himself.” And yet, the primary power belongs to the woman: She either approves of him or not. Without her approval, the show doesn’t go on, unless, that is, he overpowers her with force, thereby incurring the eternal wrath of Rosie O’Donnell and the national feminist response teams.

“The ambiguous middle ground” is that evaluative space in which the woman makes her all-important decision. Essentially affective, it’s nothing like some rational, precise mathematical formula. Nor can its complexity be reduced to verbal consent.

For, short of asking, how can a man be certain beforehand that a woman is interested in him? There are times, certainly, when he should obtain verbal consent. Nevertheless, the thing is quite a mood killer. Then too, there’s nothing women disdain more than timid men who are scared to “go for it.” “You want my permission, you nervous ninny?! Off with your heads!”

And again, until he does so, the woman may be unsure of how she feels about him; she might not like him much until, her passion responding to his, she elects to enjoy the body’s happiest pleasure.

For many intellectual men, such politically incorrect truths have become difficult to understand. For the feminized academy has taught them that women are angels who want nothing so much as “gender equality.” And so, while the pitiable “forward-thinking man” is busy reading up on the latest resentment to come out of Women’s Studies, his wife is sneaking off to do the business with her buff personal trainer, or Donald Trump. “Where were you so late, my love?” “Oh, Martha and I stopped for drinks after work. By the way, have you spoken to your boss about that raise we discussed?”

Being objects of male desire, that incessant, burdensome thing, entails not a little discomfort for women. It entails, unfortunately, a lot worse. But though sexual harassment and sexual assault are wrong by definition, it’s important for women to not follow feminists in equating expressed male sexual interest itself with moral evil. As we’ve seen, the nature of sexual desire is not comprehended by such a childish simplification.

What hinders understanding here is the culture’s fear of facing the complete truth about sex: namely that, in the Bard’s words, it can be “murd’rous, bloody, full of blame,/Savage, extreme, rude, cruel, not to trust”—and all that before you’ve been through a divorce! For while everybody knows there are lots of men who are cads, creeps, or brutes, apparently we’re supposed to believe women are so much better in eros. It is as if they never mistake clumsy yet harmless advances for something else, or lie or use deceit or willfully selective memory to endeavor to get what they want.

This gender disparity reflects two things: the natural paternal bias toward the more valuable sex, and the reality that their evils are generally subtler than those of men, with the result that they’re harder to perceive. Meanwhile, the #MeToo movement has gone berserk, and the manipulations of Ford and other women may thwart Kavanaugh’s confirmation to the Supreme Court. Of course, that would be welcome to the Democrats and their judicial activism agenda.

In 1992 the Democrats, having exploited the Clarence Thomas–Anita Hill controversy of the previous year, were able to elect a record number of women to Congress, including the cynical Dianne Feinstein. Regardless of the outcome of this fabricated controversy, Feinstein, with the earlier controversy undoubtedly in mind, has succeeded in stirring up the resentments of women who may enable the identity-politics Democrats to take back control of Congress. Look for the pink-pussy-hat wearers and the hysterics who were carried out of Kavanaugh’s hearings to vote with especial fury going forward.