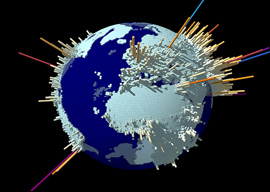 I am a pessimist, for reasons I have expatiated upon at book length. In that book’s first chapter, I distinguished two usages of the key word:

I’m using the word “pessimism” in two slightly different senses: to indicate low expectations of one’s fellow men, and to name a belief about the probable future. If we expect too much of people, we’ll be disappointed, and our schemes will fail. Heady optimism about human nature leads directly to disaster. To put it in the style of John Bunyan’s The Pilgrim’s Progress: The Road of Denial leads to the Precipice of Destruction. Didn’t the great utopian experiments of the twentieth century teach us that? We’ve repeated those experiments—in a less brazen way, to be sure, but with the same inevitable result now coming upon us.

A thinker of high thoughts should, however, strive for objectivity—for that “view from nowhere” that we attain when all personal biases have been stripped away.

“I am, as one of my oldest and dearest English friends reports, ‘a gloomy fucker.’”

I am therefore going to obey Oliver Cromwell’s exhortation to the Scots: “I beseech you, in the bowels of Christ, think it possible you may be mistaken.” I am going to look for silver linings.

There are two styles of pessimism: 1) beliefs about the probable future and 2) low expectations of one’s fellow men.

1) Beliefs About the Probable Future

1a: Fiscal catastrophe. We all know the issue: Modern liberal democracies with big welfare states have, or soon will have, more money commitments to citizens than they can meet through state revenues and borrowing in rational credit markets.

My assumption is that these nations’ political systems are not capable of solving this problem, that they will patch and fudge and postpone all they can, and that the inevitable occasional crises will be survived somehow, with the political system more or less intact, followed by more patches, fudges, and postponements. In other words, decades of Argentina.

One swallow doesn’t make a summer, though, and one Argentina doesn’t make an inevitable model for the civilized world. Argentina is atypical in all sorts of ways: Her economy is more agricultural than most, her national mean IQ is lower, and her political history is nasty, brutish, and short.

Some nation somewhere will be smart enough to figure out a solution—to pass through the inevitable crisis to a new plateau of social stability, with curtailed government spending and a population reasonably content with their reduced entitlements. It will only need one, and the rest will follow.

1b: Ethnic disaggregation. A population made up of big sub-populations differing in race or ethnicity is unstable. It will eventually disaggregate, with ethnic cleansings and secessions.

But what about Switzerland? The ethnic differences are slight—mainly linguistic—and the country exceptionally decentralized. But doesn’t (1a) point toward more decentralized nations anyway? Come to think of it, isn’t linguistic diversity as bad as it gets? At least American blacks and whites can talk to each other.

Sure, local ethnic disaggregation is inevitable. Different peoples just don’t want to live mixed with each other in close quarters. Nations can survive, though, once disaggregation has reached the point where ethnies occupy self-sustaining regions—states, provinces, cantons.

Even if you think that some peoples have too little human capital among them to be self-sustaining, there may be stable equilibria without disaggregation. We may even already have found one.