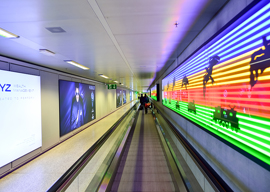 By their adverts shall ye know them; such, at any rate, is my supposition whenever I arrive at any airport.

It did not surprise me greatly, when I arrived at Geneva Airport, that the advertisements on the way to the baggage reclaim should have been for expensive luxuries. Geneva, after all, is a bourgeois, indeed an haut bourgeois, city; and as I knew from previous visits, even restaurants for refugees there from the Horn of Africa are expensive by the standards of other places in the world.

Two of the advertisements, however, caught my attention. One appealed to rebellion, the other to daring. I do not associate Geneva with either, particularly, certainly not in its present-day incarnation; rather it is its extreme stability that attracts some and repels others. It is true that my hotel had security guards outside it with automatic weapons and I was asked to identify myself as I entered; but I gathered that a Syrian delegation of one criminal gang or other was staying there for negotiations with other Syrian criminal gangs who were staying elsewhere in the city. In a noble display of multicultural sensibility, all charcuterie had been removed from the breakfast buffet, lest the presence of pork offend the Syrian murderers, and replaced by something called turkey ham. Surely it should not have been called ham, but smoked turkey? The very word might have upset the delicate constitutions of the Syrians, in a way that no amount of bombardment, killing, torture, etc. could have done.

“In what kind of society can buying a watch count as an act of daring?”

What did the rebellion touted by the advertisement consist of or amount to? It consisted of a male model, no longer in the first flush of youth but obviously trying to look still young (perhaps, unknown to me, he was an aging rock star), who was tattooed to his fingertips and up to his collar. To me he looked both repellent and stupid, though not by nature unintelligent. Intelligence, however, makes stupidity and bad taste all the more appalling.

The appeal to rebellion was itself of interest and significance, for it assumed that rebelliousness was necessarily a good characteristic, irrespective of what was being rebelled against, in this case good sense and good taste. Such approval of rebellion as a good in itself is a profoundly adolescent attitude; which is to say, profoundly shallow, if I may be allowed a slight paradox. You can, after all, be shallow to the very fiber of your being, and this was an appeal to that deep shallowness.

While I am not against rebellion as such (there have been and presumably will always be many things worth rebelling against, such as idiocies become orthodoxies), in the absence of a proper object mere rebelliousness becomes unattractive, a manifestation of mere egotism. And yet at the same time, I was seized by a certain sadness by the advertisement, that we live in so safe and tame a society that defacing or abusing yourself in this hideous fashion, as so many millions of others now do or have done, counts as rebellion. How fragile must be a person’s sense of individuality that he feels obliged to mark himself out in this way! I count myself fortunate that I never felt any such obligation, and from my earliest recollection never had reason to doubt my own individuality, however unfortunate it might have been in some respects.

As to daring, how is one enjoined to dare in the passage leading to baggage reclaim in Geneva Airport? It seems by buying a certain kind of watch, no doubt very expensive but not to my eyes very elegant: a large stainless-steel apparatus that could no doubt also serve as a knuckle-duster, and that tells you to the nearest millionth of a second what time it is in Reykjavik.