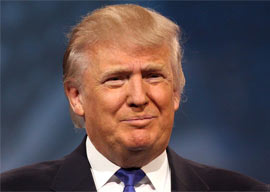 America’s 2016 presidential campaign is turning out to be the longest Rocky movie ever made.

Since the moment that Donald Trump announced his candidacy in June 2015, the scoffers and sneerers and naysayers have stated definitively that he is a Cheeto-colored buffoon who has absolutely no chance of winning the presidency and you’re an idiot for ever thinking he did.

Week after week and month after month, we’ve been assured that Trump finally made a gaffe from which he will never recover, and yet he always recovers. We’ve been lectured endlessly that women and Mexicans and Jews and Muslims and Mormons and gays and trannies and hermaphrodites and otherkin dislike him so much, there’s no way this crusty old white dude with the freaky hairdo can cobble together enough hate-filled, poorly educated white male deplorables to have even a chance of winning. (I will note for the record that on average, nonwhite voters are far less educated than white ones, but the mainstream press avoids this fact as if it were a leaky, blistering case of anal herpes.)

A mere five weeks ago, Trump trailed Clinton by about eight points in national polls. Vanity Fair crowed that “Trump’s poll numbers are collapsing” and predicted that “Clinton’s headed for a landslide.” Pundits, certain that the GOP had another Goldwater on their hands, were solemnly nudging him to drop out of the race.

“America’s 2016 presidential campaign is turning out to be the longest Rocky movie ever made.”

Six days ago, Clinton led Trump by three points in the Real Clear Politics average of national polls. Four days ago, her lead had slipped to 2.3 points. As I type this on Sunday night, Trump is less than one percentage point behind Clinton and nipping like a wolf at her cankles.

In the course of only a few weeks, he has flipped the script in several battleground states and is now leading or tied in several states that could deliver him the Electoral College like a tasty nacho bowl at Trump Tower.

The media has stabbed the beast again and again, but they just can’t kill him. Like Rocky Balboa, he gets beaten to a paste and then comes back swinging. A friend of mine likened Trump’s stubborn success to the 1950s sci-fi exploitation movie Kronos, a giant alien machine that absorbs the energy of all the bombs and missiles tossed at it and only grows stronger in the process.

Trump’s recent ascent in the polls has been aided greatly by Clinton’s “deplorables” comment as well as her pathetic collapse at the 9/11 memorial ceremony which proved that the only “conspiracy theory” about her health was that the establishment press had conspired to deny that she was ill.

I’ve been thinking for months that all it will take for him to win is to appear alongside Hillary Clinton in their debate next Monday night. After relishing how he psychologically murdered all his opponents in the Republican debates, and after observing for years how Hillary is so thin-skinned that it’s a wonder you can’t see her internal organs, I strongly suspect (OK, “hope”) that the first debate will seal his eventual triumph and the long-overdue restoration of a national sense of honor and destiny that rightfully used to scare the shit out of the rest of the world.

Year after year and generation after generation, the establishment media has shed even the slightest pretense of caring about average working white Americans in flyover country who’ve been screwed up the yin-yang by corporate outsourcing, globalist trade deals, and lax to nonexistent enforcement of immigration laws. For working-class white males in particular, a Democratic Party who once esteemed them as their core constituency has now targeted them as the source of All Things Evil. Yea, they have shat and shat and shat yet again upon the heads of what were once known as average blue-collar Americans, and yet these sheltered coastal nincompoops still appear clueless about why so many of their Designated Cultural Enemies are enthused about the only candidate in decades who understands and directly addresses what fuels their bitterness.