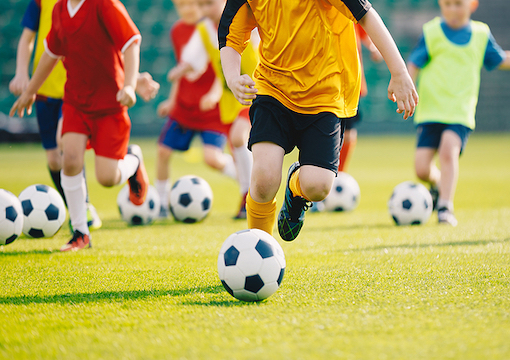 With the World Cup starting this Sunday, I realized that after decades of complaining, I’ve finally made my peace with soccer.

Like many Americans, I always felt that the world’s most popular sport was kind of lame. Granted, it was fun to play even if you weren’t any good, and the World Cup’s battle-of-nations aspect—e.g., can Germany beat France in a fight?—was diverting every four years.

But with a few tweaks of soccer’s rules to Americanize it, I used to reason, it could be more competitive on television with the National Football League and National Basketball Association, sports that feature explosive action and last-second heroics.

“Like many Americans, I always felt that the world’s most popular sport was kind of lame.”

For example, how come nobody in the World Cup stadium knows for sure how much time is left in the game except the referee, and he’s not telling?

I’m old enough to remember that up through 1969, NFL games likewise had an unofficial clock up high in the stadium that players and spectators could see that merely approximated the time left in the game, and an official clock in a ref’s pocket that kept the actual but confidential time. It was frustrating to fans in the 1960s when your team was driving for a come-from-behind win, and suddenly the ref would shoot off a starter’s pistol to end the game.

When the upstart American Football League began in 1961, it sensibly made the stadium clock official, which the NFL finally adopted when the leagues merged in 1970. But soccer still hasn’t.

The underlying philosophical difference is that while American spectator sports are now run on the assumption of a big budget that participant versions of the sport can’t replicate, such as that there will be a paid timekeeper in charge of the clock, soccer assumes that all levels of the game should play by identical rules.

Granted, natural-gas-rich Qatar is supposedly spending $220 billion to host this off-season World Cup in the Persian Gulf, which would presumably have paid for some timekeepers. But even World Cup soccer matches are played with the same austere rules used when 22 guys and a ref with a watch get together in a vacant lot in Paraguay.

Soccer’s commitment to keeping the rules the same for all levels of the game tends to strike U.S. sports fans as knuckleheaded compared with the American push to constantly improve the television product for fans sitting on their couches.

On the other hand, the relentless aggrandizement of American spectator sports as spectacles tends to relegate the versions of the game that the public plays (or, increasingly, doesn’t play) to obvious inferiority. American touch football, for example, is fun, but it’s self-evident that it’s a pale version of the real thing on TV.

That Americans optimize our sports for watching rather than for playing may have something to do with why, outstanding as our best athletes are, on the whole we are fatter than Europeans.

Another complaint Americans have is that even the world’s best soccer players tend to dog it up and down the field a little, as if they are winded, which they often are. In contrast, most American football players go all out anytime they are moving, although that is, to be honest, only a small fraction of each three-and-a-half-hour game.

I used to make up rule changes for soccer to make it more exciting like American football. The most obvious way is to stop the action more to let players catch their breath. Have time-outs for TV commercials and allow much more substitution.

Eventually, it was pointed out to me that, like most American sports fans, my idea of making soccer more exciting was, in effect, to make it blacker.

Men of West African descent are the world’s fastest sprinters, but they tend to be worn out by higher aerobic demands: In Olympic track, African-Americans and Jamaicans drop off sharply from 400 meters to 800 meters and are virtually unknown beyond 1,500 meters. Thus, they do best in team sports that give them time to catch their breath.

As late as 1963, American college football required starters to play both offense and defense, but the two-platoon system of offensive and defensive specialists became permanent in 1964. By 1967, O.J. Simpson was showing fans how exciting a game optimized for black speed could be.

In contrast, soccer has mostly resisted the urge to change its rules to make it easier for West Africans, although this World Cup will allow five substitutes per game, up from three. (This 2020 change was justified as having something to do with Covid.)

Nonetheless, European professional soccer is increasingly dominated by blacks as Africa’s population surges relative to Europe’s. France won the last World Cup with a 52 percent black squad. Yet, whites remain competitive: Tiny Croatia made it to the 2018 final with an all-white squad.

The U.S. men’s World Cup team has long emphasized employing the “best athletes,” which is something of a euphemism for blacks.

By my count, of the 26 players recently named to the U.S. World Cup roster, six appear to have two black parents and six have one.

To find twelve more-or-less black players for the U.S. squad despite African-Americans showing little interest in soccer required some creativity in coming up with rather exotic blacks.

For example, forward Timothy Weah’s father George is the president of Liberia. (George was World Player of the Year in 1995.)

Yunus Musah is an anchor baby born to a Ghanian mother on vacation in the U.S., who has lived almost solely in Europe and has played more than thirty international matches for England’s national youth teams.

Strikingly, the huge focus on blacks left no room for a single player of Mexican descent, despite Mexican-Americans being roughly as numerous as African-Americans and playing a lot more soccer.

Granted, the Mexican national team has never ascended much above the ranks of the pretty good (in the last seven World Cups, Mexico has qualified for the round of 16 each time but hasn’t advanced to the quarterfinals), despite a population of 130 million, almost three times that of two-time World Cup champion Argentina, a somewhat mestizo country (e.g., likely the legendary Diego Maradona was part Amerindian, but not Argentina’s current genius Lionel Messi, who is all Italian).

There appear to be only two players on the American team of mestizo or pardo (triracial) descent, American-born Cristian Roldan of Central American background and Colombian-born Jesús Ferreira.

Another twelve (46 percent) are whites, counting two of the four Spanish-surnamed players as white: Luca de la Torre, whose father is a scientist from Spain, and Giovanni Reyna (son of U.S.-born national team captain Claudio Reyna), whose paternal grandparents were from Argentina.

American kids play a lot of soccer these days, but traditionally we haven’t been as obsessive as the Europeans about getting really good at it. As Michael Sokolove wrote in 2010 about the highly effective Ajax soccer academy in Amsterdam for boys that trained the brilliant Johan Cruyff:

There are two ways to become a world-class soccer player. One is to spend hours and hours in pickup games. This is the Brazilian way…. Children play all the time and on their own. It helps to grow up dribbling a soccer ball at all times—in other words, it helps if you don’t really go to school too much.

The other way is the Ajax method. Scientific training. Attention to detail. Time spent touching the ball rather than playing a mindless number of organized games….

The more thoughtful people involved in developing U.S. soccer talent know that we conform to neither model.

In contrast to Ajax, American youth soccer culture traditionally schedules many eleven-on-eleven games, which are good exercise but not good training at dribbling a soccer ball because you have to share it with ten teammates. And the goal of American parents was a college scholarship, not turning pro at 16 like every Ajax dad dreams of for his son.

The old American soccer system largely reflected the values of white, middle-class American parents. It was not designed to win World Cups but to get their kids some exercise, let them experience success in a game that African-Americans aren’t interested in, and maybe earn a college scholarship.

But at the elite level in the U.S., that easygoing era is now over. Only seven out of 26 on the U.S. team played any college soccer, and they are all at least 27 years old. None of the sixteen youngest players bothered with college before turning pro.

Yet, while the old American youth soccer culture was never going to get America close to winning the World Cup, on the whole I think it was one of the healthier developments in our culture in my lifetime. Hopefully, it won’t be washed away by the new professionalism.