Our New Planet Is Going to Be Great! 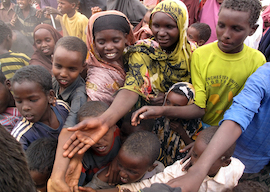 Or is the entire notion of white citizens democratically voting to keep out nonwhites too racistly triggering for more enlightened entities, such as the Ninth Circuit Court of Appeals, to allow?

For example, in 1991, when Omar’s family fled Somalia due to their complicity in the genocidal regime of the dictator Siad Barre, the population of Somalia was only 7 million.

Today, 28 chaotic years later, Somalia has more than doubled in size to 15 million despite immense outflows of emigrants. The U.N. forecasts that Somalia’s population will reach 35 million in 2050 and 76 million in 2100.

Alternatively, millions of Somalis (or, quite possibly, tens of millions of Somalis) might prefer to follow Rep. Omar to the Magic Dirt of the first world. According to a Gallup poll, at present one-third of the population of sub-Saharan African wants to migrate, and it’s unlikely that additional population growth will make Africa more attractive.

Here’s my latest update of what I call The Most Important Graph in the World: Do American and European white voters have the right to say no to the hundreds of millions of blacks and Muslims who will want to flee the messes they’ve made of their own countries?

“The ongoing African population explosion is likely to be at least as globally destabilizing as climate change, yet we seldom hear about it.”

Or would restricting immigration by nonwhites be “white nationalism” and “white supremacy” and therefore unthinkable?

While this would have seemed like an insane debate as recently as, say, 2011, there is a strategic electoral logic behind the Democrats’ Great Awokening that is constantly pushing them in an ever more antiwhite direction. As a Coalition of the Fringes, the only thing that holds together the Democrats is demonizing core Americans. Without ever increasingly whipping up hatred of whites, what is there to keep the Democrats’ collection of miscellaneous identity groups from turning on each other?

For example, the current fracas broke out with an intra-Democratic dot vs. feather brawl between two flavors of Indians. The brains behind Rep. Alexandria Ocasio-Cortez’s (D-NY) operation, her tech-millionaire chief of staff Saikat Chakrabarti, went on the warpath against fellow Democrats. Chakrabarti denounced as racist those who aren’t quite extremist enough on immigration, such as Rep. Sharice Davids (D-KS), who is advertised as “the first openly LGBT Native American elected to the United States Congress.”

Unlike Asian Indians, American Indians don’t have any relatives abroad to import, so they are increasingly at odds over immigration.

I don’t believe Sharice is a racist person, but her votes are showing her to enable a racist system.

At that point the House Democratic Caucus, chaired by Nancy Pelosi’s ally Rep. Hakeem Jeffries (D-NY), fired back at Chakrabarti and his deficit of Intersectionality:

Who is this guy and why is he explicitly singling out a Native American woman of color? Her name is Congresswoman Davids, not Sharice. She is a phenomenal new member who flipped a red seat blue.

Keep Her Name Out Of Your Mouth.

This last line was accompanied by six interspersed emojis representing “clapbacks,” which are some kind of hip-hop form of argumentation in which you prove the logic of your point by clapping your hands obnoxiously in your rival’s face.

Pelosi is from California, where elderly white Democrats like herself, Dianne Feinstein, Jerry Brown, and Barbara Boxer long held on to power despite decades of demographic change. But that has been due to the political passivity of California’s vast Mexican population.

In contrast, this year Pelosi has run into endless trouble with feistier ethnicities such as Palestinian, Puerto Rican, and Somali.

Donald Trump then decided that not enough attention was being paid to him, so he took up a topic that Tucker Carlson has been emphasizing recently: the bizarre spectacle of diverse grifters sermonizing Americans on their sins:

Nothing they say on the subject of race is sincere. It’s all the hustle designed to get them what they want. Omar has made a career of denouncing anyone and anything in her way as racist.

When you stop and think about it, it’s kind of nuts that Americans sacralize foreign elites like Omar (her family was high-enough ranking in the old dictatorship that when it fell, her fellow Somalis wanted to kill them as vengeance) from the worst-run countries on Earth and pay them to lecture us on how the only thing that will save us is letting in more of them.

For example, I recently reviewed This Land Is Our Land: An Immigrant’s Manifesto by the white-hating Calcutta-born NYU professor Suketu Mehta:

I claim the right to the United States, for myself and my children and my uncles and cousins, by manifest destiny…. It’s our country now.

After all, it’s a terrible burden that people from Somalia and India take on to move to deplorable America, but our sacred newcomers just happen to have a lot more cousins back home who are willing to redeem us with their vibrant diversity. Their relatives are so much more moral than you racists Americans that they will sacrifice themselves by moving here for the good of our souls.

So interesting to see ‘Progressive’ Democrat Congresswomen, who originally came from countries whose governments are a complete and total catastrophe, the worst, most corrupt and inept anywhere in the world (if they even have a functioning government at all), now loudly and viciously telling the people of the United States, the greatest and most powerful Nation on earth, how our government is to be run. Why don’t they go back and help fix the totally broken and crime infested places from which they came. Then come back and show us how it is done. These places need your help badly, you can’t leave fast enough. I’m sure that Nancy Pelosi would be very happy to quickly work out free travel arrangements!

Much like the brouhaha after Trump’s January 2018 comments comparing Norway and Haiti, respectable opinion went berserk with rage. You aren’t supposed to point out that the conventional wisdom is stupid.

Of course, Pelosi immediately diverted the topic from her squabbles with the diverse Squad to the racist badness of the nondiverse Trump, just as she wound up doing when she tried to discipline Omar last March for pointing out, with her Somali courage (see Black Hawk Down), that rich Jewish donors have a lot of influence on American politics. Pelosi instead ended up siding with Omar in blaming white Christian Americans for everything bad that has ever happened in this country, including the Dreyfus Affair in France.

Demonizing old-fashioned Americans is the KKKrazy Glue of the Democrats. But will enough voters catch on to cost them in 2020? Trump isn’t terribly adroit at governing, but he’s fairly adept at revealing his enemies’ hypocrisies and hatreds.

Obviously, Omar isn’t going to go back to Somalia to help her people. She’s not going to make the mistake made by an immigrant Somali journalist named Hodan Naleyeh who “tried to change the racist media narrative around Somalia and Somalis” by returning home from Canada to report on the good news in Somalia. Just last week, terrorists in Somalia blew the poor woman up.

No, Omar is going to work for the good of her clan by trying to undermine America’s borders so more Africans can move here.

There are lots more where she came from.

Now, there’s nothing inevitable about these forecasts. They depend upon birth, death, and migration rates. In this century, many third-world countries have enjoyed success at moderating their fertility. But Africa has lagged far behind.

Half of babies born worldwide are expected to be born in Africa by 2100, up from three-in-ten today. Nigeria is expected to have 864 million births between 2020 and 2100, the most of any African country. The number of births in Nigeria is projected to exceed those in China by 2070.

To paraphrase Ann Coulter: Our new planet is going to be great!

The ongoing African population explosion is likely to be at least as globally destabilizing as climate change, yet we seldom hear about it.

Many African leaders continue in thrall to the primal African cult of fertility. Sub-Saharan Africa has traditionally had such high death rates that the culture compensates by trying at all costs to maximize births. For example, just last week, Tanzania’s president John Magufuli orated:

When you have a big population you build the economy. That’s why China’s economy is so huge…. I know that those who like to block ovaries will complain about my remarks. Set your ovaries free, let them block theirs.

We need elites with the courage to make clear to African politicians like Magufuli that their cultural backwardness will not be allowed to swamp the rest of the world. I suspect that many Africans would respond favorably to a Western crusade for more sustainable African fertility levels.

Unfortunately, perhaps the biggest threat facing the world in this century is that contemporary white culture’s worship of blacks as holy will keep us from criticizing Africans for their more primitive traits, such as their fertility obsession, and instead indulge them by letting them dispatch their surplus population to our lands.

Maybe that’s the explanation for the Fermi Paradox?

In 1950, physicists Edward Teller and Enrico Fermi were discussing UFOs. Suddenly, Fermi pointed out that, considering the vast age of the galaxy, the big question is not if there is evidence for intelligent aliens visiting our planet, but why isn’t there more evidence that they have already been here.

Perhaps the great filter is that intelligent aliens tend to become obsessed with the Sisyphean task of combating racial inequality, blaming it on their own malevolent bias, and dissipate their energies on that?