Softly Wiping the Chalk From the Blackboard 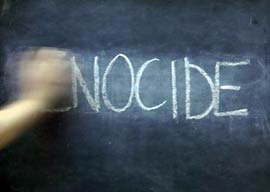 The 15th annual White Privilege Conference ended on Saturday in Madison, WI. As is usually the case with the locales for such public displays of white ethnomasochism, Madison’s quotient of blacks is roughly half the national average. In contrast, presumably ignorant and “prejudiced” white Southerners”the kind of people most despised by bourgeois-yet-Marxist whites who believe in fairy tales such as “white privilege””have for centuries lived in the blackest part of the nation. It is typically whites with the least amount of experience living alongside blacks that tend to idolize colored folks beyond all reason.

I had initially planned to attend the event as a sort of performance art“dressed head-to-toe in white with an entourage of Madison’s white bikers dropping me off and picking me up from each day’s festivities”but alas, my white privilege was not so extensive that I was able to afford the financial and temporal sacrifices my attendance would have required.

According to conference founder Eddie Moore, Jr., “white supremacy, white privilege, racism and other forms of oppression are designed for your destruction”designed to kill you.” If that’s the case, privileged whites are doing a piss-poor job, seeing as how the 400,000 or so Africans who were transported to the New World in slave ships have”through the noxious evils of white privilege, white technology, and living amid a predominantly white culture”blossomed into around 40 million modern American blacks. That’s an increase of 100-1 and truly the most inept genocide in world history.

“Assuming they have brains, how do they keep them from exploding?”

I could be wrong, but at least judging from pictures taken at the event, most of the attendees, local hosts, and T-shirt models appeared to be white, although I”d bet they”d say “whiteness” is a social construct all while accepting guilt (and perhaps private S&M whippings) for the idea that they benefit from “white privilege” even though whiteness is nothing more than an idea. Assuming they have brains, how do they keep them from exploding? I bet they”d crawl out of their skin if they could. They make my skin crawl.

Apparently the only way to dismantle white privilege and usher in this long-promised and long-delayed era of post-racial harmony is to be absolutely fucking obsessed with race.

Phenotypically white professor Joe Feagin, past president of the American Sociology Association and author of Living With Racism and White Racism as well as roughly ten million other books about how white people are racist meanies, came dressed in his trademark sexy bolo tie. He purportedly claimed that all white people are either racists or “recovering racists” and allegedly uttered things such as “The white racial frame is more than cognitive. It’s hostile, vicious, emotional, and visual,” “Whites live the white racial frame like goldfish in a bowl of water,” and “The heart of the white racial frame is white virtue/superiority. This is (unsurprisingly) the hardest thing for white people to see.”

Feagin allegedly closed his speech with words from Martin Luther King and a photo of black American runners famously giving the Black Power salute at the 1968 Olympics in Mexico City. How urban and edgy of him!

What’s easy for me to see”and unlike Joe Feagin, I don”t wear glasses, rose-colored or otherwise”is that Joe Feagin is a white man suffering the late stages of Passover Syndrome.