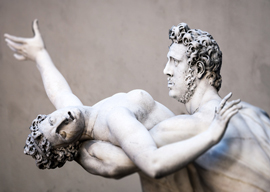 From the police blotter:

New York City police have arrested a man wanted for raping a woman after forcing his way into her Upper Manhattan apartment. Jean Rodriguez … allegedly raped the 20-year-old woman Tuesday after pushing his way into her Washington Heights apartment when she answered the door.

Sounds nasty. In this or any other particular case there may be circumstances we don”t know”but there is no doubt that rape happens. The law codes of civilized countries consider it a heinous crime, and rightly so. If events transpired as reported, Mr. Rodriguez should do serious time.

Now consider the late Arthur Koestler, whose style of sexual approach was somewhat … forthright. After conquering Mamaine Paget in early 1944, he wrote her an apologetic note:

I know that I behaved in a rather swinish way … but I still believe that is permissible if the result is enjoyed by both. Without an element of initial rape there is no delight.

Did Ms. Paget call the cops on Koestler? File a civil lawsuit against him? Tell him never to darken her door again? Commit honorable suicide? No: she commenced an affair with him, and six years later they were married.

“It is now a cardinal axiom of our culture that any accusation of any crime committed by a black against a nonblack must be false; or, if the evidence is irrefutably overwhelming, the perp’s blackness must not be spoken of.”

So while the word “rape” names a dreadful crime, it covers a wider territory than just that: a territory well watered by the soggy uncertainties of subjectivity.

Most of the subjectivity is on the female side of the transaction. If Ms. Paget’s 1944 counterparty had been some other male with a feebler personality and a less skillful approach, she would indeed have cried rape. Every man understands this, though few women do.

That is especially the case with the youngest generation of adult women, who have been steeped all their lives in a warm soak-bath of victimology. The resulting mentality was on display in the July 12 New York Times story I passed comment on in last week’s podcast.

The story concerns 18-year-old Anna, a student at Hobart and William Smith Colleges in upstate New York. Anna got drunk at a frat party, went with a football player to his room, and was later found “bent over a pool table as a football player appeared to be sexually assaulting her from behind in a darkened dance hall with six or seven people watching and laughing.”

After sobering up, Anna cried rape. The college investigated, but the football players she accused were cleared.

Anna admits to having been insensibly drunk. She seems not to have been chained to that pool table, nor to have screamed for assistance at any point. So … was this rape? You may say it was piggish behavior on the part of the males present”on which point I”d agree with you”but was it rape?

The Cultural Marxist take on the story is that since Anna is female and the footballers male, of course it was rape. Female = victim.

Fitting stories like this into the CultMarx narrative is no simple matter, though. There may, for example, be the confounding factor of race. Oddly”although it would not seem odd to New York Times editors or readers”there was no mention in all that long article of the race of the males involved.

Might they have been black? Here’s a picture of the school’s 2103 football roster. A third of them or so are black.

Given the state of our culture, two things can be said with perfect certainty.

First: If Anna had been black and the males involved white, this would have been a colossal news story, as the Duke lacrosse team pseudo-rape pseudo-story was. There would have been marches, demonstrations, candlelight vigils, and angry manifestos mass-signed by the college faculty.

As a black and a female, Anna would have been a twofer victim. If she”d also been a lesbian, the entire editorial staff of the New York Times would have been raptured up into heaven before they could do any reporting.

Second: If any of the accused males were black, the authorities would have done their utmost to minimize the case, if they couldn”t bury it completely.

It is now a cardinal axiom of our culture that any accusation of any crime committed by a black against a nonblack must be false; or, if the evidence is irrefutably overwhelming, the perp’s blackness must not be spoken of.