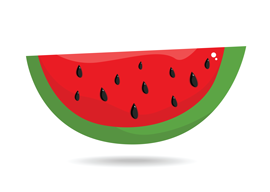 Exposed as I am, even at this distance, to the still-radioactive residue of America’s “original sin,” I thank God every day for making Canada too cold to grow cotton.

Looks like I”ll have to add “watermelon” to that prayer of thanksgiving.

I told you”I told Jackie she was gonna win, and I, uh, said that if she won, I would tell all of you something I learned about her this summer. Which is that Jackie Woodson is allergic to watermelon. Just let that sink in your mind. And I said, you have to put that in a book. She said, YOU put it in a book. And I said, I”m only writing a book about a black girl that’s allergic to watermelon if I get a blurb from you, Cornell West, Toni Morrison and Barack Obama saying, “This guy’s okay, this guy’s fine.”

Now, my reputation as a rabid white supremacist precedes me. (As does my seemingly contradictory one as a self-hating Zionist dupe.)

“Being a man of the left, I daresay Handler never expected he”d ever be the guy wearing the dunce hat.”

So surely it counts for something that even I was pulled up short when I read that.

I rapidly righted myself: OK, I thought, maybe these two writers are close friends. I recalled a similar ceremony I”d attended, at which a Catholic priest, who”d known the Jewish honoree since high school, made cutting jokes based on their religious differences, and the guest of honor loved it.

Handler’s comments seemed like a naked attempt to bring the audience’s attention back to himself. (News flash: the average author’s ego dwarfs a diplodocus.)

But was what he said, was he, “racist,” as the Internet’s white-knight, hive-mind jury quickly decided?

I made a note to watch for what Jacqueline Woodson herself had to say, if anything.

Woodson’s op-ed in the Friday New York Times (where else?) is entitled “The Pain of the Watermelon Joke.”

Reluctantly popping over to the NYT website to reread it for this column, I was confronted with the Sunday op-ed page, which approached a late-career-Marlene-Dietrich level of self-parody.

After being confronted with a photo-illustration of a man in a “hoodie” draped with an American flag, readers are offered: “Where Do We Go After Ferguson?” by Michael Eric Dyson (whom I briefly confused with Neil deGrasse Tyson and now resent for preventing me from cracking a perfectly decent “How’s about outer space if you love it so much?” joke); “conservative” Ross Douthat’s contention that “After Ferguson, it’s harder to make a case for optimism about race and politics in America”; and (I”m not joking) “When Whites Just Don”t Get It, Part 5″ by Nicholas Kristof.

(Something else to thank God for? Maureen Dowd and Thomas L. Friedman are off today.)

Woodson’s “Watermelon-quiddick” op-ed is, predictably, very “Maya Angelou””a slice of bitter yet lyrical autobiographical anti-nostalgia, heated to, if not quite to a boil, then to a strong simmer, over a steady, well-stoked flame of resentment:

In a few short words, the audience and I were asked to take a step back from everything I”ve ever written, a step back from the power and meaning of the National Book Award, lest we forget, lest I forget, where I came from.

And lest you find yourself carried away by all the “We Shall Overcome”-ity, Woodson notes:

Mr. Handler’s watermelon comment was made at a time of change. We Need Diverse Books, a grass-roots organization committed to diversifying all children’s literature, had only months before stormed the BookCon conference because of its all-white panels.

(Said literary event took place in America, by the way. Not Rhodesia.)