Watching Steven Soderbergh’s comedy The Informant! (with Matt Damon as that guy back in the 1990s who squealed to the feds about how he fixed the price of lysine for Archer Daniels Midland) reminded me of Econ 101, where you learn about the glories of competitive markets. Traditionally, economists draw their examples of “perfect competition“ from agricultural commodities like corn, which ADM processes into other commodities, such as lysine, an amino acid used in animal feed.

What the professors sometimes forget to tell you is that you don”t want to work in an industry where the invisible hand sets the price.

Before the Sherman Anti-Trust Act was finally enforced in 1911, the first thing the more respectable sort of businessman would do when a new commodity like oil came along was to sit down with his rivals to agree on how to cut production and raise prices. American captains of industry prided themselves on their cooperativeness, not competitiveness. ADM’s internal byword”“Our customers are our enemies; our competitors are our friends”“would have struck J.D. Rockefeller and J.P. Morgan as sound thinking.

To this day, business strategy largely consists of trying to wield market power so you can charge more than the commodity price.

Trust me, it’s no fun competing in a commodity market. In the 1980s and 1990s, I worked for two archrival marketing research firms who each invested a fortune to turn a lazy and lucrative little industry of idiosyncratically guesstimating supermarket sales into a precise but unprofitable commodity industry where, it was often said, there was room only for 1.5 firms. The facts, it turned out, were a commodity”a lesson the newspaper business has painfully learned in this decade.

In contrast, it’s much nicer to be in an industry driven by the mystique of brand names, where you can slack off and let your past successes carry you for awhile. Consider the recent career of Steven Soderbergh, who became a directorial superstar in 2000-01 with Traffic, Erin Brockovich, and Ocean’s 11. Since then, Soderbergh, a man who apparently bores easily, has mostly amused himself by employing stars from Ocean’s 11 in attempts to pull off movie industry stunts as implausible as Danny Ocean’s casino heist:

Let’s try Brad Pitt in an adaptation of Michael Lewis’s book about baseball statistics, Moneyball! (Sony had the business sense to shut this project down two days before filming started, although I, personally, would have rushed, graphing calculator in hand, to see Moneyball.) 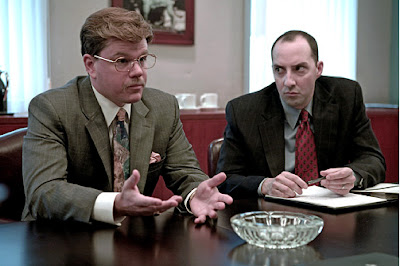 Let’s try Matt Damon in a movie about a chicken feed ingredient! Who doesn”t want to watch American, Japanese, and Korean executives divvy up the lysine market as taped for the FBI by Mark Whitacre, an annoying ADM division president who may not be quite right in the head? Why not make a movie in which there’s nobody the audience can identify with other than maybe Whitacre’s blindsided and beleaguered lawyer (Tony Hale, pictured here with a pudged-up Damon as Whitacre), who doesn”t appear until the last 20 minutes?

The Informant is either the most entertaining of Soderbergh’s recent low-budget experimental movies or the least entertaining of his big-budget popcorn movies. Scott Z. Burns” screenplay is very good at accurately and lucidly retelling complex historical events. Soderbergh’s cinematography, sound, and editing are both intentionally obnoxious and expert.

The Informant! largely works as Soderbergh’s self-parody of the heroic-whistleblower-inside-evil-multinational-corporation genre, as epitomized by his Erin Brockovich and by his buddy Clooney’s Syriana and Michael Clayton (for both of which Soderbergh enjoyed an executive producer credit—just as Clooney has an executive producer credit on The Informant! It’s like they have their own little Ocean’s 11 alumni cartel.)

Unlike in Clooney’s corporate thrillers, ADM, it turns out, doesn”t have anybody killed and isn”t above the law: vice chairman Michael Andreas, son of Washington heavyweight Dwayne Orville Andreas, goes to prison for price-fixing. Moreover, the heroic whistleblower turns out to be … well, if you don”t remember the lurid Whitacre v. ADM dueling revelations in the business press in the 1990s, I won”t remind you yet.

Soderbergh’s mistake is to play the story as a comedy from the opening bars of Marvin Hamlisch’s kitschy 1969 Laugh-In-style score. The film would have worked much better if the absurdity had crept up unannounced.

The funny thing is that ADM (the “supermarket to the world”) actually is a dodgy company. You could tell back then by all the high-minded PBS shows ADM sponsored, such as the McNeil-Lehrer News Hour. A company that’s just out to make an honest buck, such as Procter & Gamble, advertises on soap operas, not on public affairs shows watched primarily by political junkies and Washington insiders. Tim Carney’s book The Big Ripoff: How Big Business and Big Government Steal Your Money

explains that ADM is the prime beneficiary of the taxpayer’s ethanol subsidy, and its corn syrup business exists largely due to the cane sugar tariff.

Hence, ADM chairman Dwayne Andreas was possibly the biggest and most bipartisan political donor in America. He had been tried (but not convicted) for a $100,000 contribution to Hubert Humphrey in 1968. Four years later, he left $100,000 in cash on the desk of Richard Nixon’s secretary Rose Mary Woods. ADM planes were always waiting to transport potential presidents, such as Bob Dole.

Yet, Soderbergh zips past these more intriguing ADM scandals to get to the lysine cartel, which I have a harder time getting outraged over.

Due to Whitacre’s taping of its meetings, this 1992-1995 cartel is perhaps the best documented in history. Economist John M. Connor’s Global Price Fixing: Our Customers are the Enemy

Lysine purchasers didn”t much notice the cartel’s existence because it only raised prices back to the level at which they had been before ADM became the first American entrant in this Asian-dominated industry. It built the world’s largest lysine plant near its headquarters in Decatur, Illinois, in 1991. ADM’s $150 million investment didn”t make sense economically without presupposing a cartel to drive the price back up to where it had been. After decades of globalization in which U.S. regulations have helped drive manufacturing abroad, I”m not sure I”m all that upset by this.

Soderbergh, of course, has no interest in the economics of anti-trust. Instead, he’s fascinated by Whitacre, whom he portrays rather harshly until the very end, when he absolves him with the excuse that he was manic-depressive.

I”m not crazy, however, about letting bipolar disorder become established as an all-purpose excuse. The problem is that manics get credit for a surprising fraction of the big events in the history books. Think of Ross Perot, for example, surging into the lead in the 1992 Presidential race as a third-party candidate, then disappearing into seclusion all summer, then finishing strongly to win 19 percent of the vote. Therefore, since they get the credit, we can”t afford to let them wriggle out of the blame when their self-confidence runs amok. I suspect that Soderbergh might be too focused on jocularly depicting Decatur’s small town schlubiness to emphasize fully the more alarming aspect of Whitacre’s story. Whitacre, who obtained an Ivy League PhD in biochemistry, then rose rapidly up the corporate ladder in Germany before becoming the youngest corporate officer of ADM, was a man of immense ambitions. Perhaps he was attracted to ADM because it was a massive player in DC. He reminds me a little of Lee Harvey Oswald who traipsed all over the world”defecting to the Soviet Union, for example”looking for a conspiracy to join so his name would go in the history books.

What Whitacre found unsatisfactory about ADM, I speculate, was that it was a family firm, with countless Andreases standing between him and the CEO position. His plan appears to have been to use the FBI to take down the Andreases. Then, when he had the most politically well-connected job in corporate America by the time he was 40, well, who know where his ambitions would have led him next?

Whitacre turned out to be a little too crazy. Yet, how many of our leaders got to where they are because they are just crazy enough?