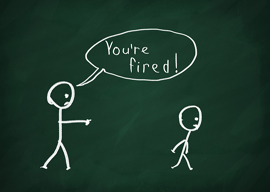 If you strip away the swastikas and goose-stepping, The Producers is, at heart, a story about wresting success from failure. Max Bialystock is a Broadway producer who has lost the ability to give theatergoers what they want, so he hatches a brilliant plan: If he can”t mount a successful show, he”ll produce one that’s destined to flop, and find a way to profit from it. Win by losing”it’s a concept that fascinated me as a child. I had no idea at the time, but watching The Producers was actually a form of training for becoming involved in West Los Angeles GOP politics.

I”ve been politically active my entire life, but never in local races. Being a Republican in West L.A. is somewhat akin to being a mezuzah salesman in Mecca. My local congressman had always been Henry Waxman, a misshapen creature who had somehow avoided jail time for downing a chandelier inside the Paris Opera. Waxman had been in office so long, his first election-night victory party featured an appearance by Genesis (not the band, but the biblical event). I always assumed Waxman to be bulletproof in his district, an elected-for-life leftist Jewish Democrat who loves Israel in practice and schvartzes in theory.

In 2009, when I joined Friends of Abe, the “secret” organization of entertainment-industry Republicans, I quickly realized that one of the more questionable perks of membership was having to be friends with a man named Ari David. Ari was a young GOP politician whose father-in-law was supposedly some political-money bigwig, so everyone had to be nice to Ari (to his face, at least). He considered himself a political humorist, and to prove it he made videos like this one, which has something to do with examining the contents of his toilet (be forewarned”you see ass crack).

Ari decided to take on Waxman, and I, being the good team player I always am in any situation until I get pissed off for some reason and become embittered and vengeful, was more than happy to help him out by attending local debates during the 2010 GOP primary in order to provide wisdom and counsel.

“A lot of Republicans are coming to understand the value of the Bialystock Gambit.”

Ari had four GOP adversaries: There was Chris Kolski, a Polish immigrant with an accent so thick it was damn near impossible to understand him. He may have been a smart man, but there was no way to tell without a translator. There was Robert Flutie, a brusque, crude New Yorker totally out of place on the L.A. Westside or indeed in any neighborhood in which the local markets don”t have an entire section reserved for gabagool. There was Chuck Wilkerson, the worst candidate of all. Wilkerson was a fossil; he made Waxman look young and vibrant. Worse still, he seemed to have dementia. At the first debate I attended, he had a senior moment and went blank, sitting there motionless in the middle of his remarks. And then there was David Benning, the only decent choice”smart, dignified, well-spoken, and good-looking in a “bland white male” kind of way. Ari the toilet gazer was my friend, but it was clear as day that Benning was the best candidate.

When it came time for the local GOP to throw its support behind a candidate, the apparatchiks chose Wilkerson the fossil. I was floored. Waxman’s age was supposed to be part of our ammo against him. How could we criticize his advanced years when we were running an even more ancient geezer? The decision to endorse Wilkerson seemed to make no logical sense. Even with the party’s nod, Wilkerson still nearly lost to Benning in the primary (Wilkerson won by just 39 votes). Waxman went on to wipe the floor with Methuselah’s grampa in the general, winning by a margin of 65% to 32%.

Weeks later, I had the opportunity to chat up one of the local party leaders over a few beers. Why, I asked, did you guys decide to endorse the worst candidate?

“It’s very simple,” he explained. “We knew we”d lose to Waxman, no matter what. Forget that “we can do it” rah-rah bullshit; that’s what we feed the rubes. We knew, mathematically, that we couldn”t win. What was more important was to protect our jobs, and the party’s coffers. If we ran a decent candidate and lost, we”d be blamed. They”d say the candidate was good, but the party failed to give him the necessary support. The rank and file would be demoralized, and demoralized people don”t write checks. But by running someone we knew would make a serious blunder”like freezing from senility”we could put the blame on him. We could tell the saps that we were just as let down as they were, and next time”with their help and their dollars”we”d find a candidate worthy of our noble party.”

As a fan of The Producers, how could I argue? Wrangle personal gain from an inevitable loss. It was a sound strategy. Hell, I admired it.

Which brings us to Donald Trump. There are a lot of GOPs who believe that Trump simply cannot win in a general election, even against Hillary Clinton. And I”m not at all certain I disagree. But my opinion is beside the point here. What I do know is that a lot of Republicans are coming to understand the value of the Bialystock Gambit. Find a way to win by losing. Figure out a way to use Trump ascendant in a manner that can strengthen your own position now or down the road.

Nobody knows it, but two weeks ago, political bird-watchers witnessed a perfect example of a notable GOP group using Trump in just that way. On April 21, Friends of Abe (yep, I”ve circled back to them) announced that it was shutting down as a formal organization. The group will stop collecting dues, shutter its website, lay off all staff, close its offices, and surrender its 501(c)(3) tax exemption. The dramatic news of FOA’s collapse was covered by many major newspapers and every industry trade, because some damn fool leaked the story to the press (full disclosure: I have been accused of being the one who spilled the beans, and all I can say in response is that I”m absolutely, 100% not guilty, and I will make it my primary goal in life to find the real leaker).

The disbanding of FOA was presented by the media as being the result of Donald Trump divisiveness. “The dissolution of a secretive club for Hollywood conservatives has baffled and dismayed its members, with some blaming internal divisions, including disputes over Donald Trump,” explained The Guardian in typically measured tones. The establishment (and FOA-friendly) conservative press was far more shrill. “Hollywood Conservative Group Breaks Up Over Donald Trump,” screamed Townhall.com. “Group of Hollywood Conservatives Dissolves Over Trump-Cruz Divisions,” blared the headline on Newsbusters. “”Friends of Abe” has reportedly broken up over concerns about Donald Trump and the California primary,” added Ed Driscoll at PJ Media.

I spent four days speaking with a half-dozen journalists who were researching the story, and every damn one of them told me, in private, that they doubted the narrative they were presenting to the public. No one”no one“believed FOA’s collapse was about Trump. Was there a division in FOA between Trump supporters and Cruz people? Of course. But it was a friendly division. Could people get snippy online? Naturally. But no one was going to start fistfights or toss drinks Caine Mutiny-style during meetings. Getting along with those who hold opposing views is part of what it means to be a Hollywood Republican. If these folks can coexist with socialists and communists, they can sure as hell spend a night alongside fellow GOPs who support “the other guy.”

Yet even in the face of their own nagging doubts, journalist after journalist went with the “Trump divisiveness” angle. They went with it because, naturally, Trump stories get hits. One reporter told me that within 24 hours of running the story, it had displaced Prince’s death as the paper’s most read online piece. Think about it: Trump torpedoing Gary Sinise’s little underground haven for right-wing entertainers had more traction than the death of Prince. I don”t even like Prince and I find that offensive.

The bottom line is, it made sense for journos to go with the Trump angle, not just because of the increased views, but also because (and this is what matters) it’s the angle they were fed by FOA members and at least one cofounder. Reporters were acting in good faith, repeating what they”d been told. The bad faith comes into play when we see why FOA fed the phony “it wuz Trump” story to the press. And it’s the same reason the L.A. GOP endorsed that fossil Wilkerson in 2010: A convenient fall guy was needed.