Stealing Surfboards From a Baby, Supersize My Seat, &amp; Go to Church or Go to Hell 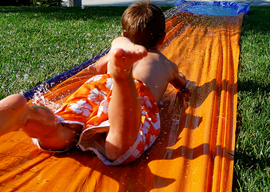 STEALING SURFBOARDS FROM A BABY

I went with my three-year-old grandson to a baby party today and I ended up threatening a five-year-old boy. I know that sounds horrible, but he kind of deserved it. Over and over again, I had asked this brat of a child to share the Slip ’n Slide surfboard because my grandson—who is an angel—had been patiently waiting at least 10 minutes for his turn. There were other children waiting as well. Instead of sharing, the brat looked me straight in the eye, deemed me inconsequential, and continued slipping and sliding with the surfboard. Finally I had to tell him I would simply snatch the surfboard away from him if he did not fork it over on his own. When he didn’t budge, I pried the surfboard right out his hands and gave it to my grandson. What I really wanted to do was push that little demon over and be mean to him, but I controlled myself. Had I known who the brat’s parents were I would have told them to handle the situation, but nobody seemed to be watching the kids except me. Now I am worried I should not have gotten involved.

“When children are left to make up their own rules, those rules tend to be very lenient.”

What would your grandson have learned if you did not get involved? He would have learned nobody is there to help him. He would have learned how to be tricky, inconsiderate, and defiant to get what he wants. Children learn by example, especially when they are small. If you do not show them how to behave, they will make it up for themselves—and when children are left to make up their own rules, those rules tend to be very lenient. In a perfect world all children would end up being nice, honest, and considerate when left to their own devices. In a perfect world the mother of the brat would have been watching and stepped in and made sure her child shared—no, actually, in a perfect world, that child would never have been acting like a brat in the first place. But alas, this is a highly flawed world, and many parents don’t care what their children do at a party as long as they don’t have to watch them, play with them, or handle any meltdowns. So given the imperfect situation I think you did what was needed to protect your grandchild while showing him the brat was wrong. If the parents approach you I would give them an earful about keeping an eye on their son, and I would not back down. Good work, Granny.

I am a big man and I do not fit it economy-class seats. But my wife, children, and nanny are all small enough to sit in such seats with room to spare. I’m a successful businessman, but I simply hate to spend money unnecessarily. Do you think it would be rude for me to travel in business class while everyone else travels in economy? At the very least, should I upgrade my wife?