Stumbling Upon a Worthy Cause 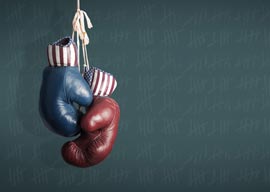 This weekend, Donald Trump posted a short position paper on immigration policy that begins with this blast of patriotic common sense:

When politicians talk about “immigration reform” they mean: amnesty, cheap labor and open borders. The Schumer-Rubio immigration bill was nothing more than a giveaway to the corporate patrons who run both parties.

In response, the mainstream media have mostly been sniping at the details of Trump’s mechanisms, rather than trying to dispute (or even mention) the winning hand he’s holding when it comes to fundamental principles:

1. A nation without borders is not a nation. There must be a wall across the southern border.

2. A nation without laws is not a nation. Laws passed in accordance with our Constitutional system of government must be enforced.

3. A nation that does not serve its own citizens is not a nation. Any immigration plan must improve jobs, wages and security for all Americans.

What’s behind Trump’s sudden rise to Public Enemy No. 1 of the Establishment? They tried bankrupting him over his immigration skepticism in June (even the golf tour cut business ties with Trump), and tried blacklisting him in July for not being reverent toward John McCain. But now, in August, Trump is doubling down on the issue he seemingly stumbled upon: immigration.

“Trump recognized that immigration skepticism had matured as a philosophy, but nobody running for president was selling it.”

What’s been going on?

First, Trump is always looking for an underserved market, especially one that aligns with his innate personality. Of course, he’s hardly infallible at judging which way the winds are blowing. In this century, he’s poured a lot of money into golf courses in the teeth of the worst golf recession since the 1930s (although golf seems to be finally growing in popularity in 2015).

But Trump made at least one historic call: When he started his lavish Trump Tower in the 1970s, the Dow Jones hadn”t hit four digits in a decade. It seemed then like a ruinous bet. When he finished it in booming 1983, however, it was exactly what the newly rich suddenly realized they wanted.

My hunch is that Trump read Ann Coulter’s ¡Adios, America! a few weeks before his campaign announcement and recognized that immigration skepticism had matured as a philosophy, but nobody running for president was selling it. (The central joke of Coulter’s book, one that Trump’s candidacy now makes even funnier, is that white liberals don”t realize that by amping up immigration, they are making their purported worst nightmares come true. And not just economically, but also culturally: the ostentatious Trump brand of luxury high-rises promoted by his reality TV show appearances, for example, is not one that would appeal as much in a more rooted society with more discriminating tastes. But in multicultural, globalist New York, Trump’s self-promotion over the decades has successfully made his name synonymous with that most broadly appealing value of the age, money.)

Candidates who aren”t entertaining enough to get themselves free airtime are beholden to wealthy donors. And one of the strongest forces in the world in recent decades has also been one of the least discussed: class solidarity among billionaires.

Now, you might think that having a billion dollars would free you to indulge in a Trump-like blast of a good time telling unwelcome truths. But in reality, we largely have a highly disciplined class of the extremely rich, who gather frequently in Davos and Aspen to be informed of the latest talking points about why any resistance to them is racist.

While the rich and powerful used to gloomily plot together in secret Bilderberg confabs, the current generation finds it more effective to invite the media to their conferences on how to fight nativist bigotry (and, by the way, high wages) by flooding working-class neighborhoods with Third Worlders. Thus, billionaires and journalists have become coconspirators against the public weal. That’s a tough tag team to beat.

Over the past two months, Trump has caused a sensation by violating billionaire class solidarity by criticizing mass immigration, the single most unifying political issue for plutocrats. Last year I went through the Forbes 400 and noted the superbillionaires who had made themselves conspicuous by donating publicly to the push for more immigration, such as Bill Gates, the Koch brothers, Michael Bloomberg, Sheldon Adelson, George Soros, Mark Zuckerberg, Rupert Murdoch, and the widow Jobs. And a large fraction of the other top dogs, such as Warren Buffett and Larry Ellison, had at least paid lip service to increasing immigration.

Since I have my reasons for paying attention to rich guys who might subsidize patriotic intellectuals (did I mention I”m holding a fund-raising drive?), I looked through the entire Forbes 400 for anybody who might be on the other side. Tied at #134 were possibilities Donald Trump and Ross Perot, whom I then suspected of having restrictionist leanings; but as of 2014 I had never heard of either contrarian putting his own money into the cause. And down in the bottom 100 I identified two billionaires whom I knew had given money to anti-open-borders groups, although I will keep their identities confidential in this age of blacklisting.

But that’s not much of a roster of skeptics compared with the luminaries paying to promote more immigration. In other words, “cheap labor” is the easiest principle that billionaires can unify around, because it’s not a principle, it’s just an excuse to grab more money.

The influx of foreign workers holds down salaries, keeps unemployment high, and makes it difficult for poor and working class Americans”including immigrants themselves and their children”to earn a middle class wage. Nearly half of all immigrants and their US-born children currently live in or near poverty, including more than 60 percent of Hispanic immigrants. Every year, we voluntarily admit another 2 million new immigrants, guest workers, refugees, and dependents, growing our existing all-time historic record population of 42 million immigrants. We need to control the admission of new low-earning workers in order to: help wages grow, get teenagers back to work, aid minorities” rise into the middle class, help schools and communities falling behind, and to ensure our immigrant members of the national family become part of the American dream.

Bill Clinton encouraged his golf buddy Trump in late May to run for the Republican nomination, presumably to smooth the path for his wife. But “America’s first black president” has got to be worrying about what he helped unleash.