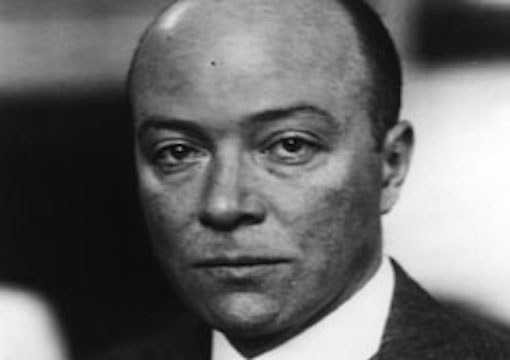 In April 1936, Ambassador William Bullitt relayed an urgent message to Washington: “Enough with the Jews already.”

Bill Bullitt was one of the most fascinating and influential figures in American foreign policy in the first half of the 20th century. Bullitt was born into blue-blooded Philly aristocracy. Daddy was old gentile money, Mommy was old Jewish money (though the matrilineal line had years earlier converted to Episcopalian). Voted “most brilliant” at Yale, the young Bullitt accompanied Wilson to Versailles. A lefty radical, Bullitt led a secret diplomatic mission to Russia to negotiate with the Bolsheviks.

In the 1930s, Bullitt became FDR’s closest confidant in the diplomatic corps, and the grand overseer of all American diplomats in Europe. Knowing Bullitt’s experience in Russia and fondness for commies, FDR made Bullitt the first U.S. ambassador to the Soviet Union. But the old magic was gone. Bullitt now saw the Soviet state for the nightmare it was, and he saw something else…something he detailed in an April 20 (hmm…why’s that date so familiar?), 1936, report to Secretary of State Hull:

The chief weakness of the Soviet State today is, indeed, the inefficiency of the bureaucracy. The communist form of State requires a bureaucracy of exceptional ability. The Russians have always been and are bad bureaucrats. In consequence, extraordinary numbers of Jews are employed in all the Commissariats. Only one out of each sixty-one inhabitants of the Soviet Union is a Jew; but twenty of the sixty-one Commissars and Vice-Commissars are Jews. The upper bureaucracy in nearly all Commissariats is Jewish. The Commissariats of Foreign Affairs and Foreign Trade from Litvinov and Rosengoltz down are almost totally Jewish. The Commissariat for Internal Affairs (OGPU) is under a Jew—Yagoda. So is the State Bank. And so is the Commissariat for Ways of Communication, which controls the railroads. The official news service (TASS) which supplies all the newspapers of the Union, is under a Jew—Doletski. The newly created Art Administration, which controls the entire artistic life of the country, is under a Jew—Karzhentsev. Only the Army is relatively free from Jews but there are many in the Ordnance Department. This astonishing number of Jews in the better paid positions has not yet produced overt anti-semitism but there are many bitter comments on the fact that about 80% of those who can arrange to pass their vacations at Sochi, the expensive and fashionable summer resort on the Black Sea, are Jews.

Bullitt called the gentile Russians “uncivilized barbarians” (“To speak of the Russians as Asiatics is unfair to the Asiatics”…burrrrn!). Without the Jews and their “particular set of skills,” he explained, the entire Soviet shebang would collapse.

To what extent can the same be said about our present-day left? Without the Jews, just how effective would the “uncivilized barbarians” be? Numerically, there are far more blacks, Latinos, and halfwit millennial whites on the left than there are Jews. But it’s the Jews who are the intellectual and organizational backbone, and the financial lifeblood…the think tanks, philanthropic organizations, deep-pocket donors, Hollywood producers, news media owners and editors, and academics.

Ultimately, the Soviet monster turned on the Jews, an example of the phenomenon I covered in a column last year (the unfortunate Jewish habit of birthing “golems” that eventually turn on their creators). Jews might have been running the show, but they were still a numerical minority who led by brains, not brawn. At some point, the Jews lost control of the “barbarians.”

Is that what’s occurring now on the East Coast, as “people of color” beat, hack, and shoot Jews like it’s The Purge: Kristallnacht Edition? These attacks are happening in a leftist capital where, in theory, nothing should go down if Jews don’t want it to. And surely leftist Jews are against being hunted in the streets and macheted in their homes.

“I don’t have space to link to all the op-eds by Jews defending the nonwhites who are knocking them off.”

I don’t have space to link to all the op-eds by Jews defending the nonwhites who are knocking them off. Column after column making excuses for the attackers and slamming Trump and others on the right for “demonizing” Jew-haters of color. Jewish journalists and activists have even opposed the simple solution of increased police patrols in besieged Jewish neighborhoods, lest the presence of cops “marginalize” the piceous pogromists. There have been hundreds of op-eds and social media posts by Jewish leftists defending the thuggish criminals and arguing against any measures that might provide relief for the beleaguered Jews. In my “golem” piece, I referred to that kind of behavior as suicidal. But I didn’t go far enough: It’s actually murder-suicide…taking themselves out in the name of taking out the West.

We Jews can do the “Medea” thing quite well (“I love my children but I hate you more”). And that rather neatly brings us back to Bill Bullitt. In 1939, Bullitt (now ambassador to France) was allied with FDR’s Jewish advisers who were trying to force a war with Germany. So great was the Jewish hatred for Hitler (and I’m not saying Jews didn’t have a legitimate reason to hate him) that the hawks forged ahead knowing quite well that a full-blown war would be disastrous for Jews living under Nazi rule. It was more important for the Nazi state to die than for Jews to live; at least that’s how certain influential Jews saw it at the time. But in 1943 Bullitt pulled an about-face. He condemned FDR’s demand for unconditional surrender in Europe, arguing that such a policy would unnecessarily prolong the war, resulting in gratuitous destruction and Soviet domination of much of the continent. In what German diplomat Karl Otto Braun called one of the great ironies of Bullitt’s life, the man who had aggressively helped initiate the European theater now wanted to put the brakes on, whereas FDR’s Jewish insiders went full steam ahead, regardless of the devastation it brought to Europe’s remaining Jews.

The cornerstone of every Jewish conspiracy theory is that Jews are always working toward a positive endgame for themselves. “Jews must live!” All conspiracy theories begin with that conclusion and work backwards. But the conspiracy nuts miss one important factor: Jews can be just as fond of suicide solutions as their Muslim lessers. We have a nasty nihilistic streak. It’s just not a trait commonly associated with us, which explains the widespread bafflement over the Jewish response to the East Coast attacks. Why did Jewish leaders have to be strong-armed into admitting that this wave of anti-Jewish violence was even occurring? Why have the most respected Jewish news and opinion organs done nothing but excuse the violence? How can those crimes be happening in a city with so much Jewish political influence?

When it came to defeating Hitler, the attitude of influential American Jews in politics, academia, and the press was that Germany had to be destroyed, regardless of the collateral damage to Jews. There are far too many Jews who think they’re still fighting that war, not against Hitler per se, but against the West that gave rise to him, a white Christian world that must be defeated to finish the fight from eighty years ago. And again, the collateral damage is expected and accepted. It’s not a consciously understood agenda. It’s just a long-simmering paranoia about how whites, who gave us our last really serious pantsing in the ’40s, are always coiled to strike again.

Leftist Jews will tolerate the violence from predatory ghetto rats and Third World immigrants, because such untermenschen are seen as necessary evils in the fight to destroy a greater evil.

The importation of immigrants from uncivilized nations is an essential element in the destruction of the West. That many of those immigrants are deeply and innately anti-Jewish is something leftist Jews understand and indulge. Similarly, the “prison abolition movement” in all its forms (from the elimination of bail to replacing incarceration with citations and probation) is another important front in the war to transform the U.S. into a Third World hellhole. NYC is the model home for the planned community the left would impose on all of America. The violent street attacks are not an unintended consequence of a criminal justice system that blanches at punishing nonwhites. What’s happening now is exactly what’s supposed to happen.

Yet still, boneheaded observers ask, “Why is this happening?” And the literally retarded ask, “Why would blacks attack fellow minorities?” In fact, the ghetto thugs are only doing to Jews what they’ve done (and continue to do) to gentile whites whenever the opportunity presents. For every Jew who’s been beaten to a mocking cry of “Take that, kike,” there are a hundred gentile whites who’ve taken a similar beating to “Die, cracker.”

Unless you look at it from the perspective that there are matters more important to leftist Jews than the safety of their own people.

Leftist Jews are holding out their hands like a scale. In one palm is the well-being of their community. In the other, the war against the white Christian West. Permanent revolution, perpetual war. That’s the hand that wins; the war comes first. There may be a leftist Jew or two who’ll do a Bill Bullitt about-face as the collateral damage continues to mount in Jewish communities. But by and large, Jews will stay the course, advocating the importation of millions of people like Ilhan Omar and Monsey slasher Grafton Thomas (the son of an illegal immigrant). They’ll continue to advocate for the dismantling of the criminal justice system, and they’ll continue to use their presence in the media to shield nonwhite and immigrant criminals from responsibility and prosecution.

Even at the recent “march against anti-Semitism” in NYC, participants blamed “cynics” for “inflaming painful divisions.” The attackers aren’t the problem; the carpers who highlight the attacks are.

New York Jewish activist Shimon Rolnitzky pretty much laid out the game plan in a JTA op-ed last week. The nonwhite and immigrant communities are not to be criticized for the escalating violence; they are allies in “the fight.” Bill de Blasio and other leftist politicians are not to be criticized either; they’re on the front lines of the fight. And Jews are not to arm themselves or use force to protect their neighborhoods. If a Jew or two is martyred, that’s the price of the successful pursuit of the fight.

Brains and brawn, working together, just like Bill Bullitt observed in Moscow. Except this time, the “brains” are facing their purge passively, content in the knowledge that they’re not going down alone.