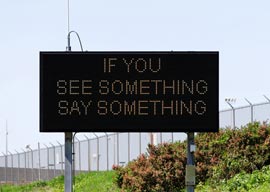 According to CBS” L.A. affiliates, neighbors of Muslim mass murderers Syed Farook and Tashfeen Malik noticed some very suspicious things going on at the couple’s apartment in the days and weeks leading to the horrific massacre that took fourteen lives, but they chose not to report anything, for fear of being labeled “racist.”

As Yoda might have said had he taught racial-sensitivity courses instead of Jedi training, “Conditioned well they are.” Political correctness wins again. Fourteen innocent lives lost, but at least no one was racist. I”m hardly being facetious. To the PC crowd, “racism” is worse than murder, and any outcome that ends in death rather than racism is considered a positive one. It takes decades of training to create a population as frightened to death of appearing racist as whites in the West are today. This kind of thing doesn”t just happen overnight. As Rodgers and Hammerstein phrased it (in a different context), “You”ve got to be carefully taught.”

Back in 1997, I was living with a young lady named Sarah. Sarah was an up-and-coming actress. She was very bright, and very observant. Sadly, she was also Canadian. She had grown up during the “boom” years of the Canadian antiracist witch hunts (ZÃ¼ndel, Ross, Keegstra, etc.). These were headline-grabbing events in that nation all throughout the 1980s. The government’s message was clear”be a white racist, go to jail (and “racism,” of course, is whatever the government tells you it is).

“Reporting something suspicious about anyone darker than Edgar Winter is a hazardous endeavor, and average citizens know it.”

Sarah’s conditioning accompanied her to L.A., where she worked as a salesclerk at a store in a high-end shopping mall in Manhattan Beach. One afternoon, while she was working alone, two guys who “just so happened to be black” came in wearing disguises. Fake curly black wigs and phony bushy mustaches (apparently, Avery Schreiber has black love-children). The two costumed men chose thousands of dollars of merchandise and insisted on paying with an out-of-state check. The store had a no-checks-allowed policy, but even with the obvious red flag of the disguises, and even though it was policy not to take checks regardless of the race of the customer, Sarah accepted the check and let them walk out with the stuff. Naturally, the check turned out to be bad. Sarah would later tell the police that she thought it would have been “racist” to deny the transaction. And although she cost her employer thousands of dollars in lost merchandise, she wasn”t fired. Her employer agreed that Sarah did the right thing; better to go broke and lose your business than appear racist.

The PC bullying we see now works so well because the soil has been tilled for decades. In Germany, every child knows that being called a “racist” will get you more time behind bars than attempted murder. Holocaust denier Ernst ZÃ¼ndel received a five-year sentence for “racial hatred” simply because he posted some articles online, whereas GÃ¼nter Parche, the madman who stabbed tennis star Monica Seles in the back with a 10-inch knife, nearly killing her (and ending her tennis career), received a suspended sentence (prosecutors were asking for only 33 months anyway). Here in the U.S., although we don”t have hate-speech laws (yet), anyone my age will remember the careers ruined in the “80s for the crime of making one “racist” remark (Al Campanis and Jimmy the Greek are two prime examples). The phenomenon of high-profile people and ordinary citizens having their careers and lives destroyed by accusations of racism began as a trickle in the U.S. in the “80s, but these days, every week there seems to be at least one instance in which sites like the Huffington Post or Salon destroy someone over a racist statement, word, or thought.

Reporting something suspicious about anyone darker than Edgar Winter is a hazardous endeavor, and average citizens know it. When congressional Republicans have tried (on several occasions) to pass laws giving immunity from lawsuits to terror whistle-blowers and tipsters, Democrats have blocked the efforts and media hacks have assailed the bills as (what else?) “racist.” I would argue that leftists need not worry; no immunity law could possibly assuage the fear the average American has of being marked with the dreaded R-word.

Remember back in 2013, when Asiana Airlines Flight 214 crashed on final approach in San Francisco? Only two people died, which meant we all felt comfortable having a good laugh when TV station KTVU in San Francisco was duped by a prankster into announcing the “names” of the airplane’s pilots: “Sum Ting Wong,” “Wi Tu Lo,” “Ho Lee Fuk,” and “Bang Ding Ow.” The on-air gaffe made for a great viral video, followed by a hearty mea culpa from the station. Pundits around the world wondered how the fake names ever made it to air, considering the fact that, as local newspapers reported at the time, as many as five people had to check and approve the names, and another person had to type them into the teleprompter. Plus, a random person at the NTSB confirmed the names when the station called before airtime. No one up the chain became suspicious? Really?

About a year after the incident, I met a young lady who was working at KTVU at the time of the crash. She told me that the general consensus among her coworkers was that those who approved the names did become suspicious, but no one wanted to take the risk of being the first to speak up. KTVU has many Asian employees, and most of the people involved in approving the names were white. No one wanted to look “racist” for suggesting that the names were fake…just in case they were wrong.

And then the next day, the white employee finds himself called into HR:

HR: We”re letting you go. We can”t allow one of our employees to call Asian people a joke and make fun of their ancient culture. Today’s workforce has no place for racism in any form, period. You”re a white supremacist, and you should be ashamed of yourself. Free your mind! Heal your hate! As Maya Angelou once said to Jimmy Carter while enjoying Keemun tea with the Dalai Lama… [The lecture then continues for 90 minutes.]