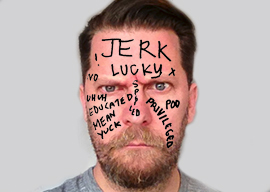 The backlash for my “Tackling Asian Privilege“ was so intense, it made me feel like a Maxell tape ad. I got a handful of texts (how”d they get my number?), dozens of Tweets, hundreds of comments, and thousands of Facebook links telling me I”m “ignorant” and “useless” and should get my ass kicked. They told me it was a “dishonest call to include Asian-Americans in discussions on race” and suggested I check myself before I wreck myself.

So I checked myself. I quit drinking for a day and spent a lot of time staring in the mirror. I gotta be honest: What I saw there made me sick. When I looked inside myself, I felt even more disgusted. It only takes a second to realize I”m doing better than others because of privilege. Doye. However, to apply this logic to others is insane. Asians face all kinds of racism and have no privileges. The fact that they”re doing better than every other group means they”re simply better. White people suck.

I would like to take a moment to deeply apologize to all our Asian readers and also to all our racially aware readers. In particular, I”d like to thank the student at Berkeley who pointed out how similar my essay was to Peggy McIntosh’s “Invisible Knapsack.” That one was a wake-up call.

“If whites accomplish too much, they probably cheated. If anyone else succeeds, it’s due to hard work.”

In fact, after going over my “Tackling Asian Privilege” essay, I realized the whole thing ceased to be offensive when I subbed out the word “Asian” for “white.”

“Nobody clutches their purse to their side when a white person walks into the elevator. If a white person applies for a job at a bank or on the police force, he or she is often welcomed with open arms (assuming both places have met their diversity quotas). When a white person commits a crime, some people are shocked (assuming he’s rich and educated). When a certain type of white man is appointed to the head of the Department of Energy, everyone knowingly nods his or her head. White privilege pervades every part of our day-to-day life and it’s time they joined the conversation about race.

“Though they comprise 75% of the American population, they make up 47% of all doctors. Only 2.3% of doctors are African American, yet they”re 13% of the population. Thirty percent of African American men will go to jail. Right now we have 1 in 11 African Americans in prison, but our nation can only say the same about 1 in 45 whites. Nobody sees the problem with that?

“Quebec’s McGill University is one of the most elite schools in North America, and to walk through their campus is to see way more Caucasians than African Canadians. This is true of all Ivy League schools. American whites have the second-highest education level of any racial demographic and they”re also the second-wealthiest. While African American households earned an average of $30,939 in 2005, whites walked away with only $10,000 less than twice that.

“The reason for this is simple: PRIVILEGE.”

“Though many whites come here with little or no money and live in rough neighborhoods, some are lifted out of this disadvantage within a generation and are soon living an upper-middle-class lifestyle. Millions of the poor are still white, but so what? Generally speaking, in America, whites live a disproportionately advantaged life where things are simply handed to them. Whites turn on the TV and they see Captain Kirk driving a spaceship. When they”re told he’s a fictional character, they jump to real-life astronaut Neil Armstrong. Whites are unfairly overrepresented in science, medicine, law, finance, education, and virtually everything that generates wealth. They are probably drastically overrepresented in Nobel Prizes, especially the men. These arrogant crackers may not publicly flaunt a racist moniker such as “model majority,” but who knows how they speak in the privacy of their own homes? As a people, white people need to recognize they got where they are not by the virtue of hard work but by stepping on the backs of others. Many of us think paying reparations is an impossible task, but we should at least be willing to join the conversation and admit, as Obama put it, “You didn”t build that.” We need to recognize that our position is innately unfair. We need to acknowledge we are lucky. And most importantly, we need to stop it right now.