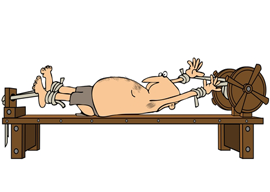 Well before I wrote these weekly screeds, I was”God help us”a poet. One of some tiny renown, in fact.

Luckily for everyone, poetry, like smoking and drinking, is among those youthful pastimes in which I no longer indulge. (Had there been national awards for those last two, I flatter myself that I”d have made their short lists as well.)

Unlike most poets I knew and read, however, I didn”t write fiction, too. I”ve completed two short stories, neither much good. A third never grew beyond an idea that invaded my brain more than 25 years ago, along with a title: “Teaching Men to Bleed.”

The plot sprang from my purgatorial stint in the 1980s anarchist left, when I was, I now realize, more of a right-wing libertarian all along. (And I wondered why I was so ticked off all the time …)

To their credit, though, the “group” I “belonged” to”such pretentious punctuation seems, well, obligatory when you”re trying to describe a tribe attempting to live without rules”agreed with me on one nonnegotiable point in this mid-Solidarity, pre-fall-of-the-Berlin-Wall era:

“Of course, our antiheroine really just poisons these gullible doofi with an intestinal bleeding agent, leaves them to die on the United Church basement floor, and absconds with their tuition money to … well, I never got that far.”

That’s probably why the first “poem” I ever wrote”the one that, when published, made what you”ll forgive me for referring to as my “name””was really nothing more than a furiously speed-written account of a real-life brush with one such creep in particular.

(And yes, I wrote breathlessly about this life-changing discovery as if I were Darwin trudging across the Galapagos”if Darwin had been a clinically depressed, alcoholic 23-year-old wearing Doc Martens, a baby doll dress, and black bike shorts. Sorry.)

As I met more unsavory “men of the left,” I conceived of a short story that would, I hoped, emerge as a cross-pollination of Heathers, The Edible Woman, and Arsenic and Old Lace.

The main character”a Valerie Solanas clone”is deeply disillusioned. Why, her male “comrades” are just as misogynist as the right-wing men of her radical feminist fever dreams, if not more so. (See also “Ghomeshi, Jian,” who by all accounts put the “stud” in “women’s studies.”) Then the Montreal Massacre erases the last trace of sanity our antihero has managed to retain.

In a city where Learning Annex catalogs are piled up just inside every other cafÃ© doorway”flogging new age men’s movement/inner child rebirthing seminars”her new workshop fits right in. The all-male class for “[Men]Struation 101″ will be dosed with what’s advertised as a harmless, all-natural herbal formula designed to simulate cramps and very light bleeding, thereby midwifing participants onto a higher plane of wimmin-ly empathy and suchness.

The workshop sells out. In fact, she finds herself turning away a larger number of smug, spindly vegan white men of all ages than she ever anticipated, especially since this class doesn”t offer participants a chance to cruise for easy, young, and demi-cute (if hairy) left-wing sluts.

Of course, our antiheroine really just poisons these gullible doofi with an intestinal bleeding agent, leaves them to die on the United Church basement floor, and absconds with their tuition money to … well, I never got that far.

Over the last quarter-century, up until today, this aborted work of fiction was never anything more than that title, an opening line (“At first, they”d planned to throw blood on the Embassy”), and a long-lost scribble of painful puns; the word “issues” topped the list.

I made excuses to myself about why I didn”t really start, let alone finish, this story. Only now can I can admit the biggest reason of all: I was chicken.

Here’s the thing: I have a coal-black sense of humor, a barely embryonic inner censor, and an almost psychopathological indifference to criticism.

But my idea scared even me.

Make that “scares,” because every so often a real-life story crops up that reminds me of my fictional miscarriage.

The aim of the “Pain Experience Camp” was to give men a taste of the pain women endure while going into labor so that they might gain a better appreciation and respect for what they go through.