Thank You for Offending Me 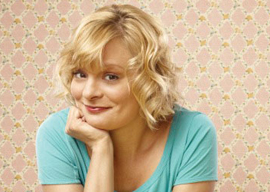 Taking the third point into consideration”not that it’s a difficult mission to accomplish”I can forgive him for the first two choices.

Aronsohn recently joked about the many new female-centric comedies on television and contrasted them with his own male-centric sitcom:

Enough, ladies. I get it. You have periods…But we”re approaching peak vagina on television, the point of labia saturation.

We”re centering the show on two very damaged men. What makes men damaged? Sorry, it’s women. I never got my heart broken by a man.

At first the statement disappointed me, too, but only because it was 8:30 in the morning and I didn”t want to hear the word “labia” while I was eating eggs and bacon. I laughed a little and went on with my day.

“I enjoy getting on a website that has the nerve to offend someone, somewhere.”

But then Martha Plimpton, star of the comedy series Raising Hope, blew a gasket. She Tweeted to Aronsohn:

Um, are you f#*king kidding me?

Others followed suit, asking Aronsohn to issue an official apology for his “offhand” and “misogynistic” remarks.

Aronsohn acknowledged their petty shaming attempts with a quick apology:

Clearly these people had never seen episodes from Aronsohn’s show before. It’s about a drunken jingle-writer whose interest in women starts and ends in their pants”how much can you expect from the minds behind it? Asking the creator of Two and a Half Men to stop being sexist is like asking The Real Housewives to stop being retarded.

The main question I had afterward was why people are getting so pissed off about what one individual said. John Derbyshire‘s piece for Taki’s Magazine produced similar effects this week (though Derbyshire’s words are much more extreme than Aronsohn’s).

It’s like these critics had never before heard such things. I agree that Derbyshire sounds insane, but I took everything as an impulsive and unserious rant”specifically the hyperlink which directed us to the video of a black man calling for all whites to be exterminated.